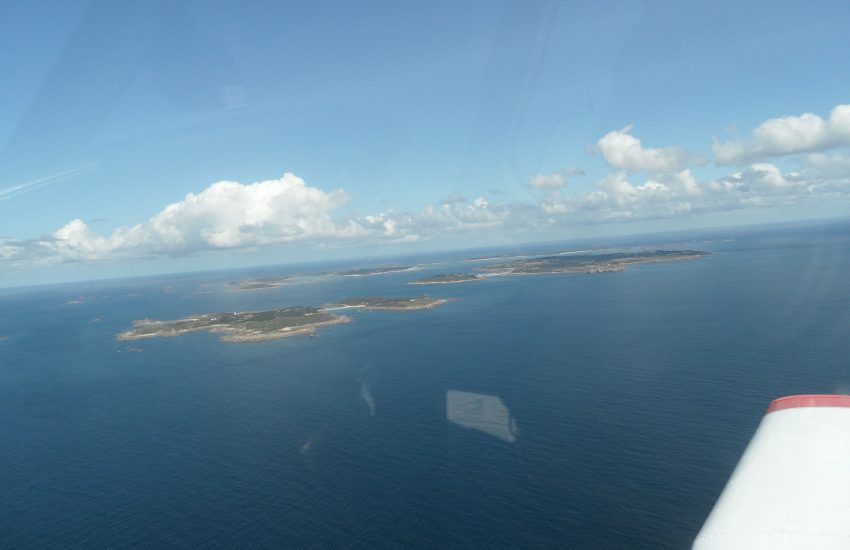 When I offered to fly my wife and daughter to the Scilly Islands (about 28 miles south west of Lands End) for a day out over the Bank Holiday, they jumped at the chance. This would be in a rented PA28 from Freedom Aviation at Kemble, rather than our TB20 which is out of action. The slower cruising speed meant a minimum flight time of about 2 hours each way – about as long as you’d want for a family daytrip without staying over. It’s quite a long way – we could have reached France in less time.

I called Scillies ATC the previous day for PPR and received a helpful and detailed briefing about the routing from Lands End, runway status (given the major construction work in progress) and temporary parking arrangements etc. They told me a common request from first time visitors was a scenic tour of the islands before landing, flown anti-clockwise from St Martin’s Lighthouse. Although the AIP recommends a VFR flight plan is filed, it seems that few bother since you will be in radio contact during the short crossing. There is no AVGAS fuel available on the island – the nearest is Perranporth or Newquay.

We arrived at Kemble shortly after 9am to find all the aircraft being refuelled for the day. I had wondered about making a fuel stop, which is common practice. After discussing onsite, we concluded that the 180 litres at 27 to 30 litre consumption gives at least 6 hours endurance meaning it wasn’t necessary. It helps reduce consumption in the cruise by leaning the mixture even if not at high altitude. After preflighting, putting on life jackets, stowing the liferaft and ensuring we had a PLB, we were ready to go. Another aircraft behind us waited patiently – the crew were trying out the newly fitted Garmin GTN650 in another Freedom Warrior and had plenty of buttons to play with before departure.

After taking our time at the hold for the engine to warm up, we took off from the newly repainted hard runway and turned south west, routing between Bath and Bristol. Bristol gave us a basic service and we didn’t need to ask for a clearance, flying underneath their airspace towards and past Clutton Farm (where I flew to Lundy from) which I pointed out to my family. At 1500 feet QNH, they asked “aren’t we flying a bit lower than usual”?

Once west of Wells mast and seeing a layer of cloud ahead, I climbed with a view to getting on top but at 5000 feet decided it was better to fly beneath them – there were plenty of gaps. Bristol handed us over to Cardiff rather than directly to Exeter, possibly because of our height, and thereafter we spoke in turn to Exeter, Newquay and Lands End.

Transitting between Lands End and the Scillies

There is an air corridor between Lands End and the Scillies, which is managed by Lands End Tower and Sillies Approach respectively. I’m pretty sure they don’t have radar and it’s all done on a procedural basis. I was asked if I was DME or GPS equipped, and when I confirmed DME, Lands End asked me to report 10 miles from LND. I confirmed my cruising altitude and people on board.

Other traffic included commercial fixed wing from Lands End flying at 1000 feet and another PA28 behind me from Gloucester at a higher alititude.

After a subsquent report at 18 DME, I contacted Scillies Approach and confirmed I wanted to take the scenic tour anti-clockwise around the islands before landing. They told me to report at St Agnes and we spent a few minutes soaking up views of the blue azure waters between the islands. I heard a couple of other commercial aircraft on frequency but it was only when reporting at St Agnes that I realised we’d arrived at a busy time. Orbitting about 4-5 times, with the other PA28 doing the same behind us, I realise from the GPS log that I let the 10 knot wind drift us offshore more than I realised. Initially number 3 to land, another commercial aircraft appeared and slotted in (plus a departure), then we were approved to make the approach.

It’s been reported as quite a tricky airfield to land at, with turbulence and sink effects close in short final. With the wind at 320 10 knots (ie straight down the runway), it couldn’t have been much easier. There was a little turbulence on very short final but nothing significant, and I ensured we didn’t float too long. The uphill gradient also helps slow things down.

Directions to parking involved a temporary route because of the extensive building work, but there was plenty of grass available. We walked around to the main terminal for a toilet stop and to pay the landing fees (although that can be done prior to departure). With no movements allowed on Sundays, we had to be airborne before 6pm, but were otherwise free to come and go at our leisure.

The building works on the runway had more or less completed – all are now completely tarmac and some of the hump back gradient has been removed. An expanded terminal building was still being worked on and should be completed soon. We watched inside as passengers have to view the safety brief on a TV prior to boarding – these are such short flights they probably don’t have any steward(ess) onboard.

Walking around the island

You can radio for a taxi before landing, and one will be waiting to drive you into town for about £4. You can also pre-book bicycles which are left ready to use on arrival. There are even road-worthy electric “golf buggy” carts for hire. But we used the tried and trusted “shanks pony” (i.e. walking) which was a relief after over 2 hours in the aircraft.

Walking downhill, you quickly arrive at a beach on the east coast and then climb over a short hill into St Mary’s itself. The town was crowded with tourists as the Island’s mainland ferry (The Scillionian) was docked – being a Saturday it was a turnaround day with many new arrivals and departures. The smaller ferry boats were busy with island tours and inter-island traffic. Many yachts lay at anchor, and there was plenty of activity to watch.

We had taken a picnic and ate that on the beach then walked around the headland.

Departure procedure required a straightforward call for start (I had already given my details when paying the landing fee, and a strip was already written up in the tower). We made our power checks in the parking area, then had to wait for a couple of commercial movements and one other light aircraft before it was our turn. Without taxiways, each departure movement takes a bit longer because of the time required to backtrack down the full length of the main runway.

We routed home much the same as when outbound, except choosing to pass west of Bristol along the coast over Weston-super-Mare and Clevedon. We spoke to the same radio units, the same checkpoints at 10 and 18 DME from LND. We reported north abeam Lands End field, then at St Ives when we were switched to Newquay. I remained at 2000 feet and was granted a clearance overhead without needing to climb above their ATZ. 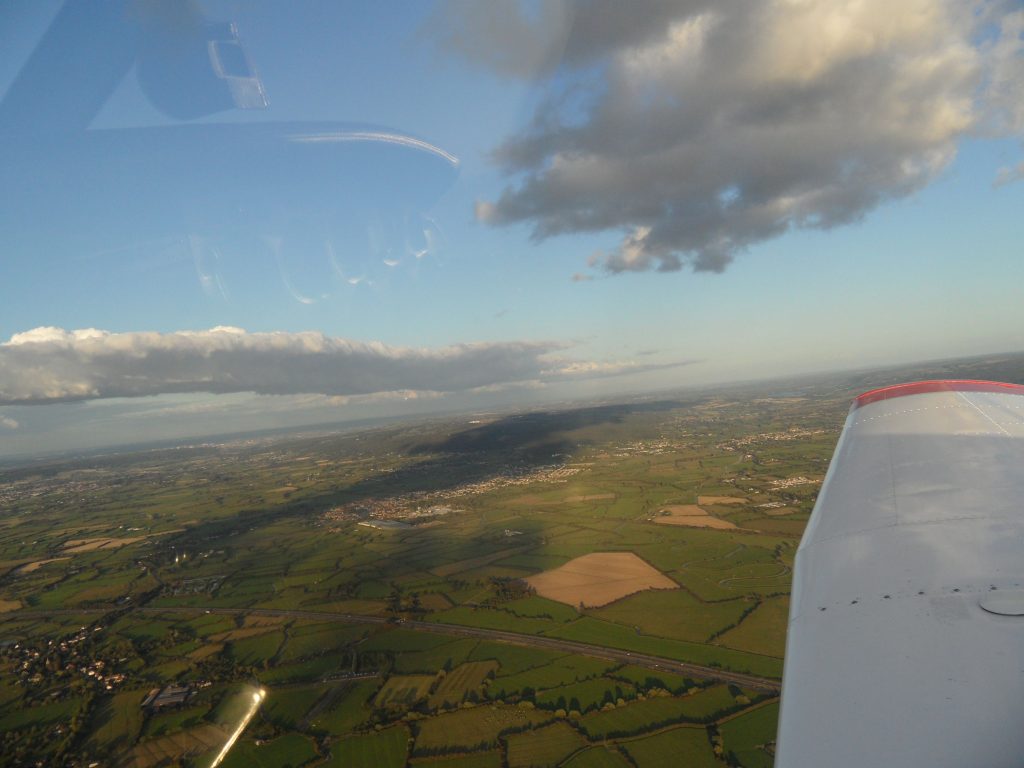 Bristol were quick to offer clearance for a more direct routing but we wanted to enjoy the views up towards the Severn Bridges. We heard a Memorial Flight on frequency (I think a Spitfire and Lancaster, but may have been mistaken).

Once clear of Filton, Bristol were happy for us to switch to Kemble. Thinking there would be nobody else around at this time of night, I was surprised to hear someone landing well ahead of us. We made the appropriate traffic calls and landed easily on the hard runway and parked up after a full day’s outing.

In 2016, I revisited the Scillies in my TB20, staying overnight and taking the ferry across to Tresco. That write up includes a short 4 minute video including of the arrival and landing.