My co-owner Rich and I agreed to share a daytrip in our TB20 from Gloucester, and were hoping to make this an airways flight to somewhere in Northern France. We settled on Deauville and planned accordingly. Rich brought a work colleague along and flew outbound, leaving me the return flight.

The forecast wasn’t good and would certainly have ruled out much VFR flying. The low cloudbase of 1200 to 2000 feet was one thing. Crosswinds at our destination of 15 gusting 25 were quite another. We decided that we’d fly there anyway, and if unsuitable for landing then would divert or even just return to base. Full fuel provides for up to 6 hours endurance, and our airborne time would be around 1:30 each way.

Rich used the excellent and free autorouter to identify the optimal IFR flight routing. The program has evolved considerably and now also provides a 10 page briefing pack including weather, notams – the GRAMET chart is particularly useful and shows expected cloud layers throughout the flight.

The outbound routing wasn’t too bad – almost all in controlled airspace and with only a relatively slight detour east towards London before turning south. However the return leg doesn’t permit the reciprocal routing at or near the FL100 we are limited to without oxygen – more on that later. The planned and flown routes are shown graphically at the bottom of the page.

After filling the tanks full, our clearance was to join airways at MALBY (overhead Malmesbury) level at FL90 – the controller at Gloucester was aware this might need an unattaintable climb rate if flown direct, so suggested a northbound departure before turning south in the climbout. We did this, entering cloud at about 2000 feet and then overflying the field at about 4000 feet. We popped out of the cloud layer to sunshine at around 5000 feet as predicted. London Control then offered us an entry “in the climb” and we joined at about FL75.

Once in the airways, you basically just follow orders, but do have to be attentive to instructions given and respond quickly. We had to change frequencies a few times, and I think squawk code also. The pace of instructions issued to all aircraft in the sector closest to London was quite frenetic – it stills seems quite bizarre to me that in this day and age of computer technology we rely on the tactical expertise of ATC and basic voice instructions. After one handover, it took us almost five minutes to find a gap in the torrent of instructions to announce ourselves. We could see (and sometimes were advised of) airliners in the vicinity.

Rich had loaded the flight plan as filed into the GTN650, which is much easier to do than into an earlier Garmin GNS430 – each airway leg automatically works out the possible exit points and sequences those sections. We were using this in NAV mode with ALT HOLD maintaining FL90. In our aircraft, you just have to manually turn the yellow course pointer in the HSI as instructed at each intersection – the autopilot then automatically flies that track.

At Swindon we were instructed to fly a heading 10 degrees to the right rather than track along the L9 airway to the next waypoint at CPT. Adjusting the heading bug and pressing the HDG mode on the autopilot is all that’s required. About 5 miles before CPT, we were instructed to fly direct to GWD (Goodwood) and then shortly after another handover, direct to DRAKE. This involves pressing “Direct To” and selecting the waypoint from the flight plan, turning the yellow course pointer to the new heading and switching the autopilot NAV mode back on.

Before we reached DRAKE, we were handed over to French ATC – Deauville Approach. We had already picked up their ATIS, so knew the crosswind was strong. They asked if we could accept the RNAV approach to runway 12 (i.e. were we equipped and qualified to do so). On acceptance, we were instructed to route direct to DEMOM and report there. We hadn’t gotten the plate out at that point, so the controller phonetically spelt out the waypoint name. With the approach loaded, we routed directly south to that point.

Realising how much height we had to lose with about 40 miles to go, we had asked for a descent almost as soon as we were talking to Deauville. This was granted to FL70 initially, and we dropped out of controlled airspace, later commencing a smooth 500 fpm descent toward DEMOM after the approach procedure was activated. There was very little other traffic on frequency and we were number one for the approach.

A couple of aircraft on frequency were making their way into Cherbourg which didn’t have ATC in the tower that day – so the controller provided another frequency to call him on after landing, or you could telephone to close your flight plan. He emphasised that the landing must be VFR, self-announced in French on the local frequency. Forgetting to close your flight plan in France isn’t recommended and could be very costly.

The cloud tops were around 5000 feet, so we were relatively close to the coast before entering them. It did get slightly turbulent at that point, nothing too serious, but an early warning of what to expect. We passed DEMOM at 3000 feet and were asked to report on final at RG406, the final approach fix, at which point we were cleared to land.

Rich handled the strong and gusty crosswind well, with single stage of flaps and slightly higher approach speed leading to a remarkably gentle touchdown. There was only one other aircraft on the apron in what seemed like a quiet and sleepy airfield. We chocked and control-locked the aircraft before heading into the office to pay our landing fees and have our passports checked. We were told to exit through the normal security gate on our return prior to departure.

When we asked our taxi driver to take us to the town centre, he asked “which one?” Deauville is on the south west side of the river, Trouville is on the north west. Our taxi deposited us in Deauville’s attractive town centre where we browsed the market stalls and bought some local produce, including several smelly soft cheeses. We walked across to Trouville and enjoyed an excellent set lunch of seafood in the Taverne Du Port. There’s an excellent fish market and some interesting shops along the river front. 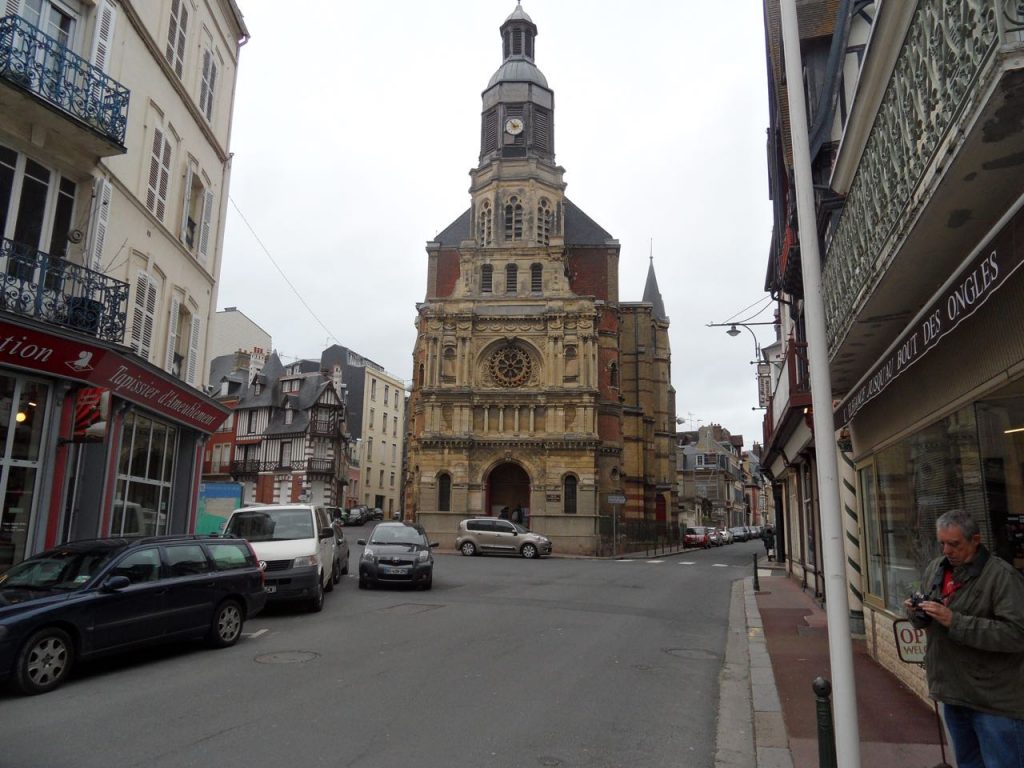 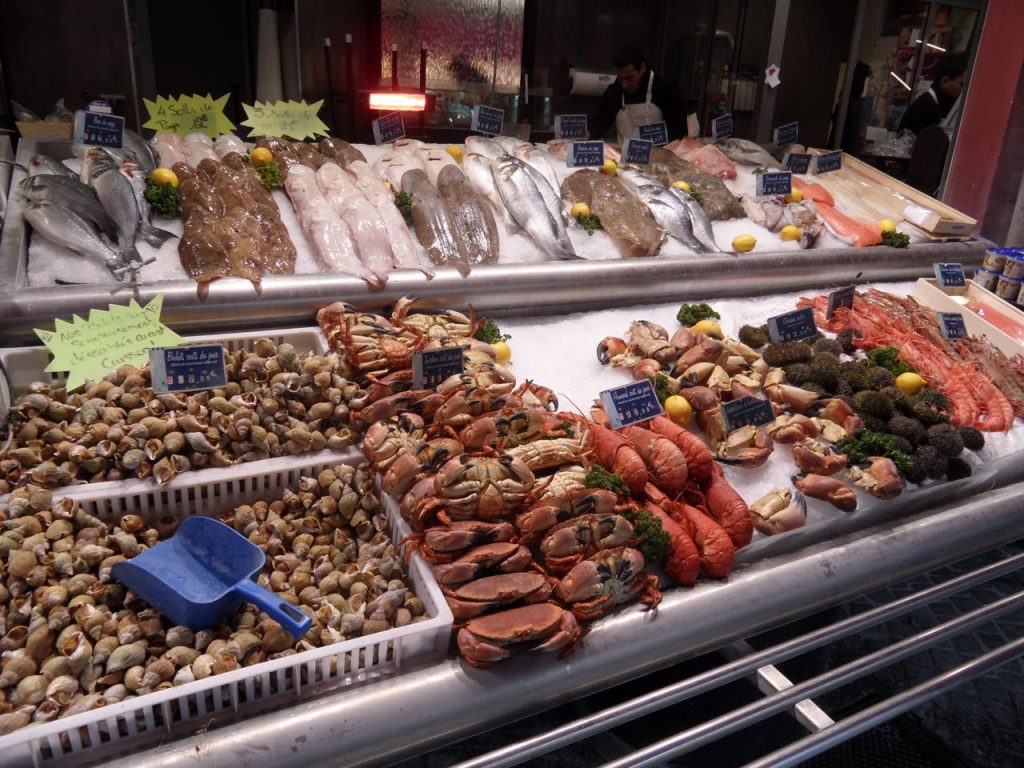 The airport was busier when we returned, with an incoming holiday flight due. We dawdled slightly too long in the airport café, where the manager helpfully vacuum-sealed our (very) smelly cheeses, meaning that there was a long queue for security when we wanted to return to our aircraft. It turned out that we could exit through the GA office (perhaps not the case when the airport is quiet), and again our passports were checked.

Our take-off was quite exciting, again with a strong crosswind and soon after we entered into some quite convective cloud as we crossed the coast. At one point I was even descending despite the normal climb attitude. We had been given the SID (standard instrument departure) NEVIL 4W as filed. ATC asked us to recycle our transponder because they couldn’t see us which we did, then routed us north direct to NEVIL as a shortcut.

Approach asked us for our planned routing and we requested a more direct one, to SAM if possible, since the danger areas would be cold during the weekend. They said they’d try to arrange that for us with London, but in the end simply transferred us to London Information – we were already outside controlled airspace and even on an IFR flight plan that’s an easy option for them. We “freecalled” London Information who were quite surprised to hear our situation, but did their best to negotiate an airways join at the earliest opportunity. They also double checked with French ATC that we had permission to transit a small piece of airway controlled by Brest.

Initially we flew the route as filed but were prepared for an airways join at ASPEN. Our airways entry was initially granted at PEPIS and shortly before entering controlled airspace again, we were handed over to London Control who quickly gave us a further shortcut direct to SAM. The system can seem a bit haphazard but I’m sure the controllers were doing their best to work around the limits of the procedures.

Once back over the coast, we were routed up towards CPT and then kept south of L9 airway before being granted an exit route direct to Gloucester descending out of controlled airspace. We were told Gloucester would accept us at 4000 feet and handed over directly to them. With so little traffic around, we were quickly approved for the ILS approach via the DME arc and commenced our descent. Rich kept an eye out to ensure we didn’t infringe Brize airspace which we were close to, and we joined the arc at 2300 feet platform height.

DME arc arrival for the ILS

A mistake was not setting the yellow course pointer to the ILS runway direction early enough, causing us to overrun interecepting the final approach course slightly – quickly spotted and recovered. With a strong crosswind, I also choose to use just one stage of flaps and a higher final approach speed. I was a little “hot and high” over the threshold but rolled out with runway to spare.

All in all, a very educational and enjoyable day out.

The cheeses certainly benefitted from being vaccum wrapped but have made their presence felt since being opened. Just as well it wasn’t a hot summer’s day without that protection.