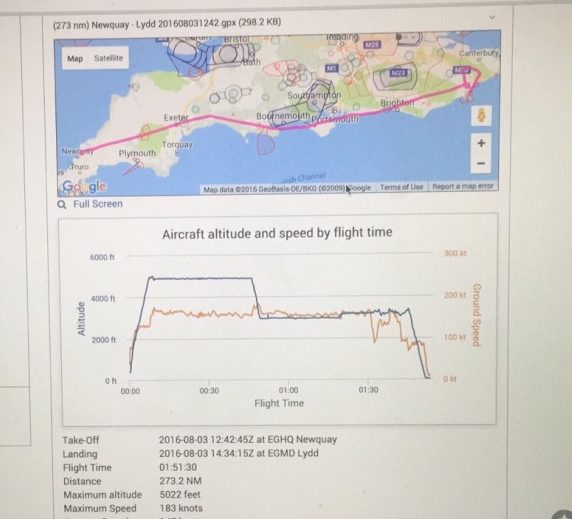 Although I can’t conduct IFR training (a standalone EASA Instrument Rating Instructor has a pre-requisite of 800 hours IFR time, which effectively rules out non-commercial pilots), there’s nothing to prevent me from acting as a safety pilot and informally mentoring qualified private pilots. I can accompany pilots with an IR(R) or FAA Instrument Rating who are acting legally as P1, and have done so several times.

A fairly new route to obtain the EASA IR is to first undertake the American FAA Instrument Rating and then convert it. This avoids taking any EASA theory exams (but you will need to take the FAA IR theory test and will be expected to answer questions on absolutely any aspect of the EASA theory syllabus orally). Regardless of your previous experience, you need to fly a further 50 hours IFR PIC after gaining your FAA IR ( which can be done in any country, and in any IFR capable aircraft). Although you don’t need to take any formal training at a UK ATO and can immediately take the EASA IR skill test, it would be sensible to do some because the criteria and procedures of the FAA and EASA systems differ somewhat.

Unless you already have an FAA IR or some other good reason, I’d suggest that the going directly for an EASA CB-IR is now probably simpler, quicker and cheaper than going indirectly via the FAA IR. The theory syllabus has been much simplified from before and the content fits into a single A4 book, with several of the exams taking as little as 10-20 minutes.

My role is to act as safety pilot, keeping a good lookout during any VMC portion of approaches and pointing out/reminding about the differences so that the final polishing off training is minimised. This involves prompting for regular checks (taxi, enroute, approach, final, after landing etc.), noting R/T phraseology (as per CAP419), sanity checking the intended flight routing and approach briefs. I’ve also visited quite a few UK airports and so am familiar with many of the local arrangements. Ultimately the pilot is P1 and I wouldn’t expect to take control unless someone had a heart attack or similar catastrophic event.

I’ve enjoyed three days and 20 hours of intensive flying, remaining in the UK in order to make use of the pilot’s IR(R) privileges while logging lots of IFR time. We flew quite a circuitous route: Gloucester to Humberside, Newquay (but couldn’t land), Shoreham (overnight), Dundee, Hawarden, Gloucester, Cardiff, Newquay (landing this time), Lydd back to Gloucester making a total of seven instrument approaches. We received a variety of different ATC services – generally excellent given some of the awkward constraints that controllers operate under in this country – with seamless handoff co-ordination between controllers in many cases. A traffic service was available much of the time, but not always. It’s helpful to state that as one word in your opening call when outside controlled airspace IFR (but nothing else apart from call-sign) to avoid the need for a “What service do your require?” – which reminds me more of a 999 emergency call centre. CAP413 is worth a quick review in that respect.

A few things I picked up/noted/remembered. The lower levels of some airways are Class D (so open to IR(R) pilots), but there is still a fair bit of Class A airspace below 10,000 feet. While I can legally transit in Class A (as an IR holder), an IR(R) pilot is limited to Class D. We had to be quite careful about which bits we could ask to route through.

I had forgotten whether the semi-circular rule applies to heading or track, a factor in strong crosswinds. SERA means this is standardised throughout Europe now. The old quadrantial rules have gone and you should fly IFR at ODD levels (FL30, FL50 etc) when magnetic track is 0-179, and EVEN when between 180-359. Figuring out the transition level in any part of the UK remains a challenge (not only does it vary with location, but in some places also with time of day). I reckon you can’t go far wrong if you assume it’s 3000 feet, but the base levels of airspace/airways shown on the CAA chart are a good indicator – probably a sensible idea to be on the same basis  (FL or altitude infeet) as the airspace above you to avoid infringements.

Transits were surprisingly commonly available and granted, with one directly aligned with the runway overhead the airport (I won’t name it specifically) which I was really not expecting we’d get. We’d just been lucky to arrive at an unusually quiet period. Heathrow Special cleared us at low level (not above 1000 feet) to the west of their zone (VFR)/east of White Waltham. There doesn’t seem to be any sensible non-airways IFR route clearance for GA through Edinburgh airspace when departing Dundee to the south, except by staying clear to the east.

Most approaches were vectored ILS, requested tactically on arrival – something you can’t expect to be granted every time. Liverpool (at very short notice) vectored us through their airspace from the north almost through their overhead and into Hawarden. We flew the NDB/ILS procedure at Dundee (for runway 09) with a visual circuit to land on 27. The NDB is offset to the west which can cause problems and the cloud/terrain in that direction could be poor (it was VMC when we flew it). There had been a crash the previous year due to this specific issue. Leuchars provided a radar service until we were almost at the NDB and handed us to the tower who cleared us for the procedure.

Shoreham’s instrument approaches aren’t available after 5pm, and with low cloudbase reported (scattered at 800 feet), we weren’t entirely sure if we’d make it in. In the event, we remained VMC descending through a hole in the cloud over the sea for a direct downwind join following another inbound aircraft. At least we had enough fuel onboard to divert if required. Their current RNAV approach has a decision altitude of 800 feet which might not have been enough – hopefully their planned LPV approach will improve on that.

I used my PilotAware throughout. It spotted many airliners, especially those above us, but very little below and I didn’t spot any other PilotAware user at all. I’m still of the view that the more aircraft fitted with ADS-B out the better, especially those flying IFR, because that can be picked up by PowerFLARM, PilotAware and other traffic awareness devices. Pilotaware remains a low cost method of receiving such signals and easily displaying them on SkyDemon and similar tablet Apps.