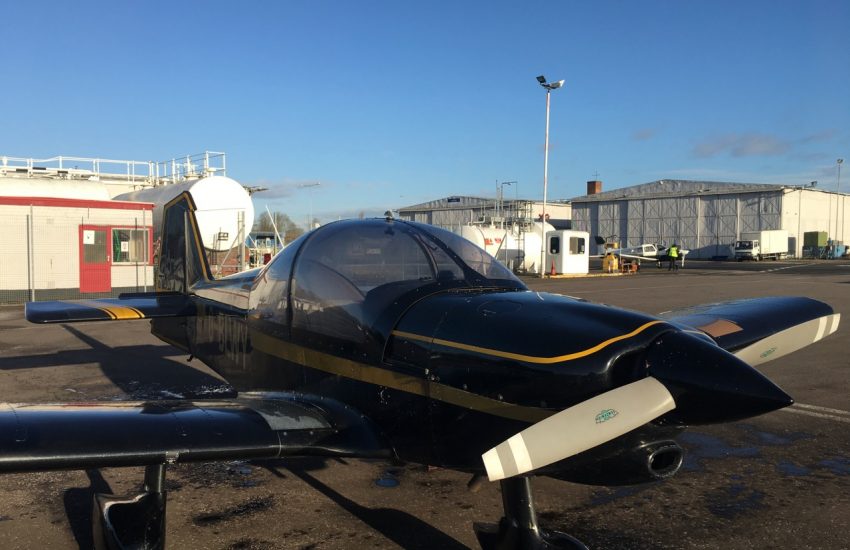 A mandatory element of the EASA Flight Instructor course relates to spins. Potential flight instructors must not only receive training for incipient and full spins but demonstrate to a Flight Instructor Examiner that they can correct demonstrate and recover from these abnormal conditions. Although this can be combined with the FI Assessment of Competence at the end of the course, typically this is scheduled as a separate exercise with two flights – one for training and one for the examination.

Spinning requires a suitable aircraft and my FI Course provider On-Track use a Robin 2160 from the flight school next door for this purpose. It can be scheduled when the weather suits – a nice sunny CAVOK day is best, and flown anytime after the lessons on stall recovery have been completed.

A thorough briefing included an accurate weight and balance calculation. For aerobatic purposes, total weight is limited to 800kg, so with a Basic Mass of just over 600kg that leaves 200kg for both crew and fuel. These flights are typically close to the airfield and don’t last more than an hour. The regulations have been relaxed a bit for aerobatic flights – no need for local charts, PLB, fire extinguisher or printed procedures for being intercepted – any of which might become loose when upside down and cause a problem. Full 5-point harness/seat-belts ensure you are firmly strapped in. Minimum fuel reserves are lower. Fuel onboard was more than we wanted, so we’d have to fly around and do something else until we were within limits. During initial checks the AI wasn’t indicating level but we decided it wouldn’t be much use during aerobatics so not a problem.

Having psyched myself up and been thoroughly briefed, pre-flighted and double checked, we started our take-off roll and called out the usual checks (T’s and P’s, airspeed indicator alive)…. only it wasn’t. The needle didn’t move a millimeter. Being unfamiliar with the aircraft probably didn’t help but there was definitely a second or so while the cogs in my brain processed the situation before I closed the throttle and announced “Stopping” to the FISO. An inspection of the pitot tube showed nothing adverse (it hadn’t had a cover on overnight, so perhaps something had crawled in). We returned the aircraft to its base and flew another exercise on a PA28 that afternoon. 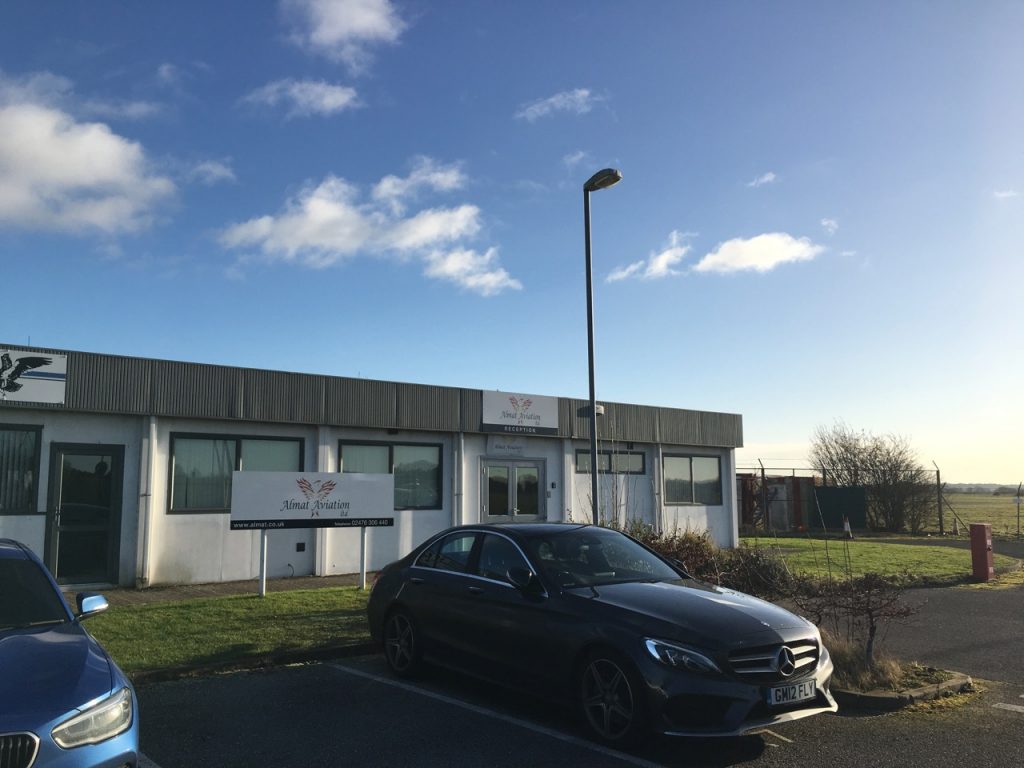 We had better luck in Coventry the next day, flying a similar Robin 2160 from Almat Aviation. A quick rebrief, full W&B calculation, confirmed enough fuel and off we went, climbing up to 6000 feet outside controlled airspace to the south. 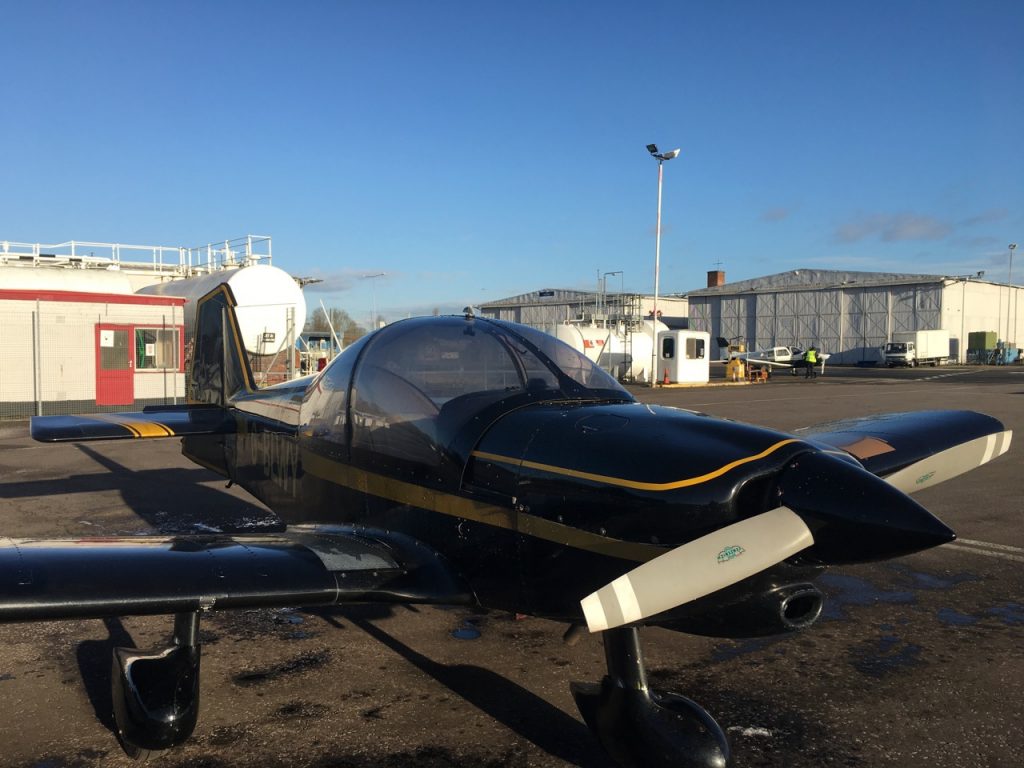 Imagine applying the most stupid and extreme control inputs when close to a stall (stall warner blaring). Full back on the elevator combined with full rudder. The aircraft pitches up and rolls over. This is the incipient spin stage and if caught quickly is quite easy to recover from – just return the controls to neutral (centre the stick and rudders). It might come out pointing in almost any direction (including upside down), so the next thing is to roll the wings level, apply power and recover to straight and level. It all happens very fast and to my inexperienced eye seemed quite violent. Height loss was just a few hundred feet. After a few of those, we then went on to full spins.

This involves keeping those daft control inputs going – full aft elevator and full rudder. Once in the spin you are pointing down at maybe 45 degrees, hurtling towards the ground at 2000fpm or more. It can be very disorientating. The airspeed sticks at around 70-80 knots unlike a spiral dive.

The recovery technique is similar to the incipient spin but involves full opposite rudder. You can tell which way you are spinning by looking at the ground (there’s plenty of it out the front window), which is why spinning above a monochromatic surface (eg water or overcast cloud) isn’t recommended. The balance ball also provides another clue – one of the few instruments unlikely to be affected by the violent motion. The Artificial Horizon has probably failed at this point and should be ignored.

After being shown the technique, I did a few of those myself. I’m told that the Robin is a fairly benign aircraft for this type of manoeuvre. When the spin stops, it’s quite sudden. Height loss is quick and considerable – several hundred feet per rotation.

The nearest experience I can compare this to is a roller-coaster ride, such as Kraken in Orlando (probably showing my age now), with the difference being that you are in control of the outcome. At least it’s not as extreme as Space Mountain where you can’t see anything in the pitch darkness.

This second video covers 20 rotations and a lot of height loss with commentary (and a few colourful expletives from the student).

The spin test involves a separate flight where you have to talk through a demonstration of the incipient spin and full spin from the right hand seat to show you understand and can recover. It’s not intended that either situation would occur in a normal lesson, but nice to know that every flight instructor has proven they could deal with it and not just freeze up.

My two flights lasted 1:10 and 0:45 respectively, requiring time to fly well clear of controlled airspace and climb up to 6000 feet before conducting the manoeuvres. It’s normal to squawk 7004 during the exercise so that ATC controllers have some idea of what you’re up to, even if you aren’t talking to anyone.

One learning point was that the latest electronic AIs seem to cope better with these conditions that older mechanical kit. They will recover almost immediately whereas a mechanical device might not – some of the very older ones even need to be caged and locked down during aerobatics to avoid damage.

In the UK, instructors always conduct a thorough HASELL check before unusual manoeuvres like this. Apparently this isn’t always the case in some other countries around the world. We certainly had a very thorough lookout of the area below us (using steep turns) before commencing operations.

I was reminded that every aircraft behaves a little differently and as they’d say on Blue Peter, don’t try this at home. Although an FI is theoretically approved to teach spinning, it wouldn’t be sensible to do so without further instruction and being current on the specific aircraft.