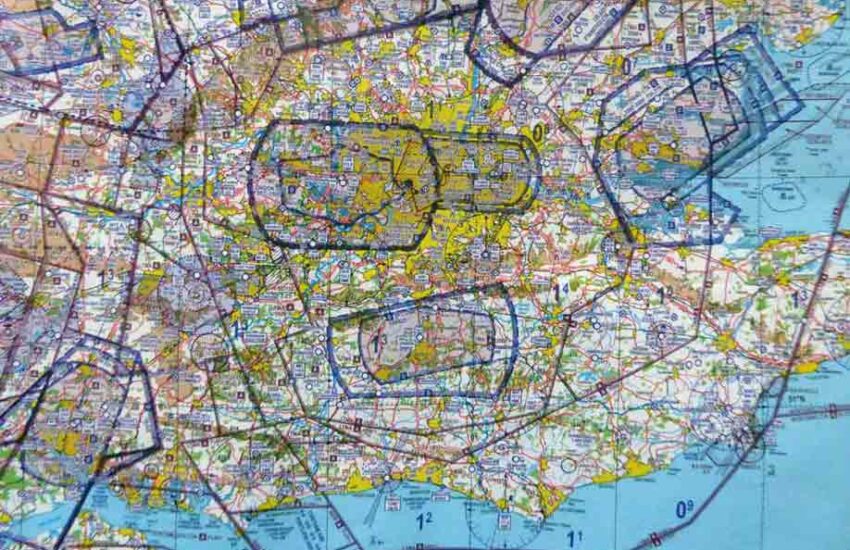 There has been a “Rite of Passage” when learning PPL navigation theory that required all aspiring pilots to master the circular slide rule. Many YouTube videos explain the technique for applying wind drift to ground track/distance, some using a wind arm and others not, some using wind up and others wind down.

In my experience, few private pilots ever use these devices after gaining their licence and instead rely on modern tablet navigation Apps.

In the UK, it is now perfectly legal never to use a circular slide rule and has been for a few years (Ref CAA Standards Document 11 Section 6.5). This comes as a surprise to many Flight Instructors and Examiners with some who still can’t quite believe it. Instead, you can buy a dedicated electronic flight computer, such as Sporty’s electronic E6B. These cost almost £100 new (here) but can be found secondhand on eBay, and can be taken into your navigation theory exam.

Rather than each of my students buying their own, I recommend that each buy the E6B electronic calculator App for $10 (£9) for their Apple smartphone to learn and practice operation. I then lend them the physical calculator for use during their exams since they can’t take their mobile phones in with them. The App even works on an Apple Watch (also not allowed in the exam).

Once they’ve demonstrated competence in manual plog creation, students can use a tablet app such as SkyDemon to calculate their plog data. I still require them to draw lines on the paper chart, adding drift lines and writing in turning point details in the traditional manner. Drawing a large wind arrow helps situational awareness. Initially, the student will not use a moving map in the cockpit and flies the planned heading at the planned speed and altitude for the planned time. It is often a surprise to them when this results in reaching their planned waypoint. The more accurate wind drift estimates seem to me to work better, although in stronger and changing wind conditions there will always be some error that needs correcting. Poor tracking, speed awareness or altitude variation (sometimes deliberately to avoid cloud) does result in errors, as does failure to double-check the compass/DI alignment. These techniques have not changed in decades and are important to master, together with an appreciation of how to select and identify visual reporting points.

The workload then increases for unplanned diversions, where the student must continue flying the aircraft whilst also measuring the direction and distance to the new destination, then apply some mental arithmetic for drift correction. I recommend printing out (or copying the data from) a web-based windstar calculator during pre-flight planning.

Once these traditional skills have been learned and mastered, we can then teach the use of moving maps as part of regular flight – something that many instructors I’ve spoken with do not believe appropriate or relevant on the PPL course. Views include the fact that such tablet apps are not certified or that it’s not in the syllabus (actually GPS is specifically included).

Fly the heading, not the magenta line! I am a great fan of the mantra “bug it, fly it”, which means making a positive decision on what heading you intend to fly, implement it by setting the heading bug and then fly it as accurately as you can. Then glance at what the outcome is as a secondary factor, and allow time for the results to become apparent. It’s much harder if you focus primarily on the magenta line because you have no simple reference on the DI/HSI and can spend more time looking inside than out – the initial PPL workcycle of Look out, Attitude, Instruments remains paramount.

The reality is that after passing their skill test, almost all new PPLs will buy and use a tablet app of some sort. If their PPL school had not included any training, then they will self-learn and may pick up some bad habits.

In my view, use of these tablet Apps today is essential to avoid airspace infringements. These include highlighting temporary pop-up airspace, such as for royal flights or drone testing. Awareness of other traffic is now also possible when connected to SkyEcho or similar traffic receiver. Some gentle guidance is worthwhile on how close aircraft have to be before you can see them – typically less than 2 miles – and not to get too concerned about those further away. I have previously thought this might cause information overload in the circuit , but do now find it helpful to glance down and identify where to look for other circuit traffic. I personally don’t use audio alerts which I think would be very distracting during lessons, especially in a busy R/T environment or in the circuit. Many PPL students don’t have bluetooth headsets equipped for that and we don’t have it plumbed into the club aircraft audio system.

What to do if it goes wrong

Perhaps the most critical factor is what to do if the moving map fails for any reason. This is very rare due to GPS system outage (there has not been a single second of GPS satellite system failure this millennium) but reception can be affected by military jamming exercises or very rare interference which is usually temporary. More likely is that the tablet overheats or runs out of battery. I’ve found that later models rarely overheat, and this is helped by operating at lower brightness, avoiding charging in flight and keeping it out of bright sunshine. More aircraft are now fitted with USB power outlets that alleviate the chance of running the battery flat.

One proposal for reforming the PPL skill test is to allow the student to fly their navigation route making full use of SkyDemon or similar in the cockpit, then simulate complete failure when in-flight. The technique for reverting back to manual methods, highlighting the need to record your progress/last waypoint beforehand, locate yourself on a chart and continue/divert as appropriate would be the scenario most likely in the real world. In these cases, I’d allow full use of the cockpit instruments (personally I’d include the panel GPS and radio navigation instruments, but others might disagree).

Other aspects of tablet navigation include