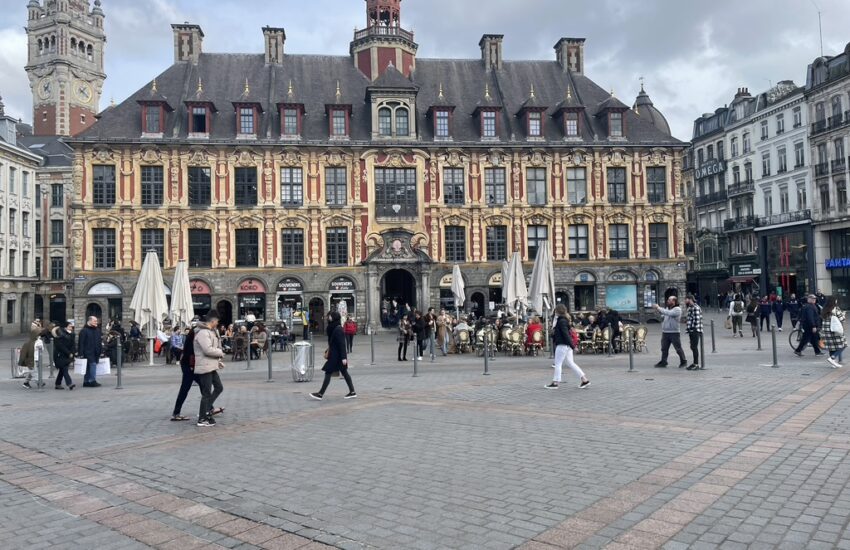 With a fully operational TB20 aircraft and European travel opening up once again, I arranged a daytrip to Lille with Nigel (one of our newer club members) at relatively short notice. It was satisfying to able to travel abroad again.

Paperwork/Planning (assuming all are fully vaccinated):

No tests were required at any stage.

*Subsequently, the need for UK Personal Locator Forms has been withdrawn and there is no requirement to present a COVID pass to enter French bars or restaurants.

I used the portable oxygen because of flying above FL100 for more than 30 minutes. I have equipment for two people although passengers are allowed to fly without oxygen up to FL150.

We refuelled to full before departure, maximising the duty drawback and avoiding the need to top up when abroad.

We wore lifejackets and I tucked our dingy within easy reach behind the seat.

Outbound IFR airways – vectored much of the way

Our departure clearance on the ground was to fly direct to BADIM climbing FL80, report passing FL50 when I should expect to contact Bristol Radar. Almost as soon as we spoke to Bristol, we were given a radar heading as a shortcut towards Swindon and asked to climb to FL120. Once in the airways, we remained on vectors until just past Gatwick when I was given a direct to Lille. I couldn’t quite believe that I didn’t use any of the en-route waypoints on my flight plan. This was really quite a direct and simple route, and I sense that the extra 2,000 feet above my non-oxygen cruising altitude of FL100 probably does make a difference.

As we crossed the coast, it took a few attempts to hear and decode the ATIS from Lille which revealed they were on runway 25. These are broadcast alternately in English and French, so it can take a few minutes to capture all the details. I used the split radio function so that Nigel could listen to the ATIS on box 2 whilst I remained with London Control on box 2 which avoids the risk of missing an unexpected ATC instruction.

Lille approach was pro-active in asking me if and when I wanted to start descending, and I delayed that slightly to benefit from the tailwind. I asked for either the ILS or the RNP and was told to standby. Subsequently I was given a routing to the ASBAR initial approach fix for RNP 26, later updated with a shortcut to OSLID. I had printed out the plates the night before, but (not for the first time) had foolishly left them at home on the printer, so had to look them up on my iPad.

Up to now, I have been using JeppView for that but the App is being discontinued by Boeing (who now own both Foreflight and Jeppesen). It’s disappointing because I find they are very clear to use and recommend them to students, but the pricing and accessibility have become very expensive and awkward. That’s further complicated by Foreflight’s separation of European and US subscriptions, so you potentially end up needing two if you want to practice using the US system while flying in Europe. SkyDemon is much simpler with a single worldwide provision but does not offer Jeppesen plates as an add on.

We were one of three aircraft parked on the GA apron. A minivan drove out to pick us up, advised us that passport control had decided not to inspect us today (this is fairly unusual and random, something you can’t determine beforehand, and perhaps helped because I had been there several times before), and walked us through the terminal building pointing out the taxi-rank. 10-15 minutes later we were in the city centre.

We spent an hour or more just walking around the city and soaking up the atmosphere. Life seems (more or less) back to normal now, although masks were visibly worn inside shops. We had to show our covid pass barcode a couple of times when entering cafe/restaurants – either on your phone with the NHS App or printed out on paper which I keep in a small waterproof bag.

Lunch was on a terrace in a narrow street – many restaurants being surprisingly busy – and the owner reminded us to keep our valuables (especially cameras) out of sight. After a bit more sightseeing, we headed back to the airport.

We paid our fees at the information desk and were escorted through the normal passenger security screening by the friendly staff, then driven back to our aircraft.

The VFR departure was very straightforward, with power checks at the holding point of my choice – effectively I could decide how much of the 2,000 metre runway I wanted to use. Our flight back was fairly straightforward, talking with London Information over the channel (well above the drone danger areas), briefly with Shoreham (only operating a radio service, but this did provide some traffic information), listening squawks for Farnborough and Brize, then back to Gloucester positioning for a 5 mile straight in to runway 22. It was noticeably more turbulent at the lower levels between 3,000 and 4,500 compared to the silky smooth outbound flight in the airways. We had a reasonable tailwind that shortened the return leg by about 20 minutes.

The METAR reported a crosswind of 15 gusting 22, but having flown quite a few circuits during in the week it seemed well within limits and I made a good landing.

This seemed to me to be a fairly straightforward, comfortable flight without surprises. There was good weather, few other aircraft around, with all the aircraft equipment working well. It bodes well for further trips later this season.