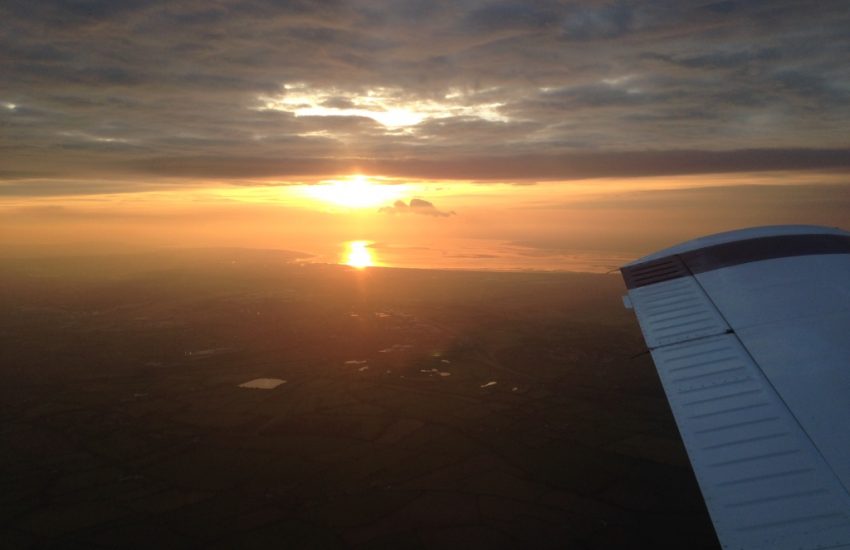 One of the next steps a private pilot can take is to learn to fly at night. This can extend your range by being able to depart a daytime only field close to dusk, then fly in the early evening back to base (assuming it is open and has lights).

This is not a rating which needs to be revalidated and there is no test to pass. A course of 5 hours must be taken with certain prescribed features, including solo full stop landings, a cross country night landaway and solo night time.

Since Kemble doesn’t operate at night, I chose to do this at Cotswold Aero Club at Gloucestershire Airport (also known as Staverton). This is open during weekdays until 7:30pm and weekends until 6pm, giving about 2-3 hours of night to train in.

The aircraft they use is a Robin DR400. I liked the sliding top canopy and great visibility, the comparatively better acceleration and access from both wings rather than a single door. The push/pull power control (more like an old choke control than the pA28 throttle lever) and unusual starting procedure were less attractive.

First, I had to learn the procedures at Gloucestershire, which has  a full ATC rather than AFIS service – you have to “book out” by calling ATC on the telephone first, listen to the ATIS on the radio, call and request engine start, then follow your clearance. Secondly I had to learn the new aircraft, not radically different to the PA28 but with some quirks and differences.

Night flying was very exhilarating and enjoyable. We did some flights with snow on the ground, which made it easier to see (and could make a forced landing more  successful if was needed). But some people don’t like the idea of a single engine plane flying at night, because if there is a failure it can be much more catastrophic.

I’d strongly recommend the club and the airport to do the qualification. They are very well setup for it and accommodated me where possible. One downside is that because they are so busy, you either have to book up very much in advance or find other times to come. I was able to leave work early on two or three days, so that could get there for 5pm and make best use of the couple of hours before the airfield closed. Weekends meant there was a lot less time, and on my final day of the training I had to time it within a few minutes to make sure I included all the required flight time but didn’t overrun and incur excess charges by keeping the airport open after normal working hours.