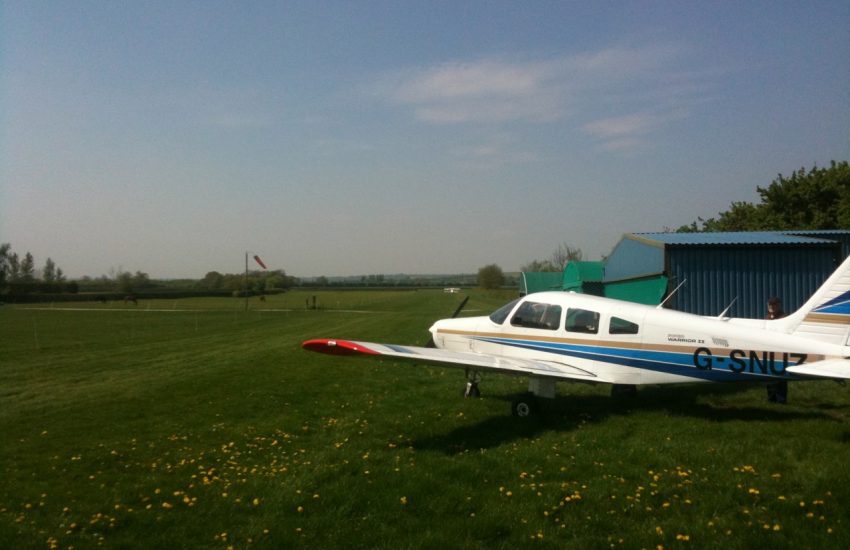 One of the more experienced club members used to have share in a plane at a small farm strip near Aylesbury. He’d not been back there for several years, but still kept in touch and was planning a landaway to visit there again. I’d already had a landaway with him to White Waltham, and was more than happy when he asked me along. He would fly there and I would do the return leg – taking off from a farm strip seemed much less challenging than finding and landing there.

We’d planned to depart shortly after 9am and turned up at Lyneham about 8:30 to find the cloudbase was low, and reported to be worse in the direction of our planned trip. We considered going South West instead, where the weather would be better, but after a couple of hours determined that conditions had improved enough to make it worthwhile. We’d also sorted out an alternate, a nearby RAF base, where we could land for free.

It was VFR navigation to get there, with about an hour’s flight time overall. As we approached, Dave pointed out some landmarks and spotted the field. He called up his friend on the safetycom channel, and received a reply saying that there was no other traffic and we could have a straight in landing. Since Dave hadn’t been to the strip for several years, he thought it much wiser to make one circuit and visually confirm the layout first. He configured the plane for landing, making traffic calls on the safetycom channel. Coming over the hedge at 65, we touched down and rolled (bumpily) to a stop.

The touchdown area is in a large/wide field which then leads through a gap in the hedge to the main part of the strip. An electric fence, barely visible when airborne keeps the horses on their side of the field and makes the strip seem quite narrow. A road crosses the end of the strip, and it has automatic gates and flashing lights which are used when aircraft are taxiing or taking off/landing – pretty much like a level crossing. Several barns at the far end of the strip store the local aircraft.

We parked up, sat down and had our picnic, while Dave caught up with his old friend. Another resident took off in a fixed wing bi-plane microlight, which only seemed to need 200 yards before becoming airborne. There was no other traffic all the time we were there, although someone else was working on their aircraft.

We talked through the take off in detail and walked the length of the strip to determine how the ground felt and what the wind was doing. First, there was an open field (where we had touched down), this led into the narrower part of the strip, then after the road there was the barns. We worked out where the abort point would be – this would give us a good 150 yards to stop if we weren’t airborne by then – marked by a tree and a different colour in the hedge.

The wind was pointing straight down the runway, although would be reduced by the barns at the far end.

After startup and power checks at the far end of the runway, we lined up and with one stage of flaps powered up with footbrakes holding. Off we go, speeding up as we crossed into the narrower part of the strip – important to steer straight here. At the same time, keep the nose up to avoid too much pressure on the nosewheel. Second stage of flaps down now, at about 40 knots – we didn’t want the extra drag earlier, but do now want the extra lift. Taking off, we quickly speed up to 65 and then are climbing quickly above the barns and start a turnout to avoid the nearby village.

My biggest concern had been ensuring we fly over (rather than through) the barns at the far end. We had plenty of clearance to do that – and would have stopped if we hadn’t taken off by our abort point. What was more noticeable was how important it is to keep straight – the barns on the far left (or fence on the right) would have caused real problems. I can see how much more difficult this might be in a strong crosswind.

On our return we crossed through the Brize Zone, to avoid some gliding activity at Abingdon, and returned to fully controlled airspace at Lyneham. There, we were on track for the ILS so tracked that down and then circled for a straightforward landing on 18.

The contrast between a farm strip and a fully controlled airport like Lyneham could not have been much greater. Even so, we did have someone on the ground to talk to, which isn’t always the case for many strips. This was a great experience – I wouldn’t have wanted (or been confident) of landing there myself, and talking through the departure plan brought out a few interesting extra performance tweaks.