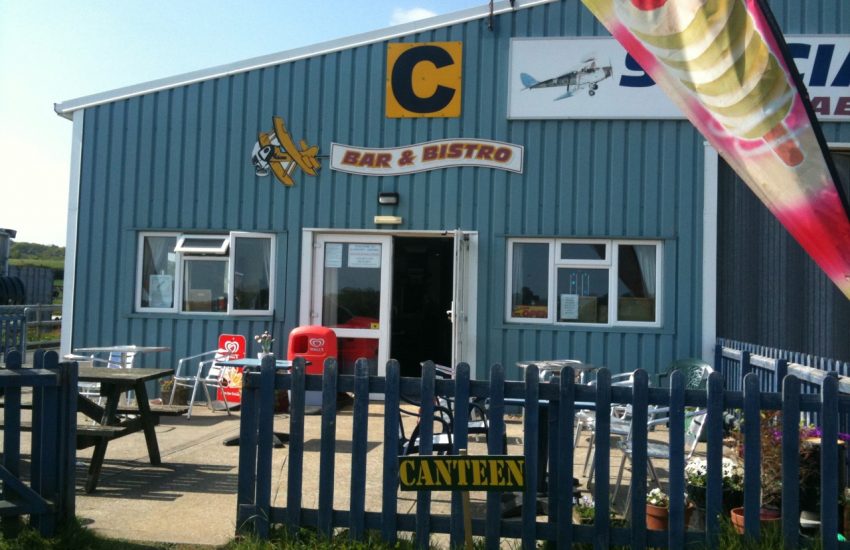 A solo landaway to Sandown

With my IMC course being delayed due to lack of instructor availability, I thought I’d make best use of the holiday I’d taken off work combined with good weather to enjoy a solo landaway. I booked G-VICC which I’d been learning the IMC course on for a few hours, but was asked to swap to G-ELUE because a problem with a faulty press-to-talk button on the instructor side meant it couldn’t be used for instruction – since I would be flying solo it wouldn’t affect me. Although G-ELUE has far more basic nav equipment than G-VICC (which is probably why it’s been less popular), it would be enough for the simple needs of a VFR landaway.

Outbound from Lyneham, Southwest to Compton Abbas and Bournemouth

I was running a little late due to the change, needing to get instructor authorisation etc. but had done the flight planning in the morning in advance and checked NOTAMs, so was ready to go. My routing took me South West, overhead Henstridge and with clear view of Compton Abbas, then crossing the Bournemouth Zone. I called them up while flying at around 4000 feet and was cleared to cross not above 3000. Routed pretty much directly overhead Bournemouth airport, heading towards Hengisbury Head. A Learjet took off beneath me and the controller asked me to maintain my height/heading (I was at 2800 feet then) and inform before any change. There was good visibility across to the Isle of Wight, Poole and to the East although with some haze.

Great views of the Solent and a quiet approach

The controller reminded me that I would need to comply (ie avoid) the Solent CTA, so asked for and was granted descent down to 2400 feet, with a plan to route along the Solent itself just below 2000 feet. There were quite a few yachts out and the view along the Solent from Yarmouth towards Portsmouth and Cowes was stunning.  Bade Bournemouth farewell and switched to Sandown Radio, who gave me the airfield information – 05 left hand with wind from the North East. No other traffic. Pretty much ideal. I flew north of Bembridge, keeping an eye out for any gliding activity – their ATZ had been withdrawn, so no need to call up or avoid completely. Routing inbound from the sea, I called descending dead side and joined crosswind having a clear view of the airfield. Still no other traffic present to worry about. Turned downwind, made the call and checks, then plenty of time to sort out the approach and landed (not too bumpy) at 65 knots. The runway has several taxiway exits, so easy to vacate quickly at the next one and the radio operator simply suggested I park up behind the nearest aircraft.

This is a lovely airfield, wide open countryside, walking distance to the beach, nice cafe and straightforward booking in procedures. The building itself is quite large  and behind the cafe area there are toilets, briefing rooms etc. presumably used by the flying school. These are all modern and look well equipped. Had a chat with another crew who had also flown down from Lyneham the same day (via a different route) earlier in the day.

There had been a lot of doubt about Sandown’s future last year, with the runways almost being ploughed up with a view to property development. A strong campaign saved the airfield and now that it is actively being managed by Britten-Norman, who’ve been moved out of Bembridge, it should become even more popular. I’ll certainly want to go back there, probably taking the family next time.

The short time of the slot meant I had to depart fairly promptly – only just time for a cuppa. Called up and (incorrectly) requested taxi, which of course you don’t get with air/ground radio service. Instead I got the QFE and wind again, so just announced taxi-ing to 05 hold and off we went – pretty bumpy along there, so took it pretty stead. As I was completing the power checks, I heard someone call downwind, so instead of jumping in and taking off immediately I waited for him to land and then lined up. Two notches of flaps, kept the nose up, powered up with the toe brakes on and we are off. A bit bumpy as we gather speed, but with just one on board, two stages of flaps and less fuel, we’re off the ground pretty quickly. Sped up to 65 then took off, taking a right hand turn to avoid Bembridge and head out to sea. Flaps away, fuel pump off, and watch the VOR which was tuned into Goodwood to see if it matches the direction I’d calculated.

Routing back from the south east

Flew over Chicester, Petersfield then up towards Popham. I kept low (around 2000 feet) until clear of the Solent area just to ensure I avoided controlled airspace. Saw a Chinook cross below me which was easy to see, but other than that relatively little traffic. Heard Solent telling someone off for infringing airspace at 4000 feet about 15 miles south of Southampton (so definitely not me!) and asking them to identify themselves. They either weren’t listening or weren’t going to admit who they were. Got a basic service from Farnborough Radar who weren’t too busy, then switched to Lyneham Zone as we got north of Newbury.

Cleared straight in at 1600 feet, I could see the airfield come into sight. This is where I’ve found the ADF particularly useful in the past, because it points exactly where you need to go. However, the ADF doesn’t work on this aircraft, so it took me a little longer to get my bearings. Switched to tower and was cleared for a join, which I clarified was to be a right base join. There was already a Herc ahead of me and I started the timer when it was on short finals – I really wanted the full 3 minutes to avoid any wake turbulence. Checks complete, flaps down and approached at 70, I aimed to land long and so not have too far to taxi back to the turnoff.