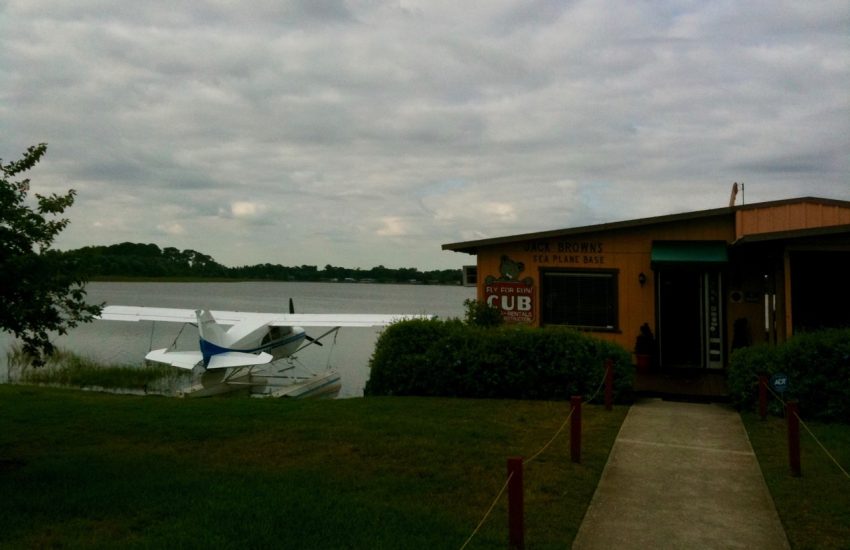 I had a business trip booked to a conference in Florida, with the possibility of taking some time off, I looked at what possibilities for flying there might offer. I’ve been the US many times on business before, but rarely able to do something extra.

One option suggested was to fly a floatplane (or seaplane) around the lakes of Florida. I was lucky enough to be able to fit in a trip to Jack Brown’s Seaplanes in Winter Haven. They’ve been operating in a similar way for many decades.

The J3 Piper Cub is a 100 horsepower single engine plane with few bells and whistles. These two seaters – instructor in front, student behind – have few instruments. An altimeter, rev counter and airspeed indicator and a few temperature gauges are all that’s required. The prop is hand swung to start, there isn’t a radio (but a very good intercom) or DI, AI, DME, VOR or ADF. You really only have the stick, rudder and throttle to work with – everything is done by feel, which improves your flying skills no end.

We flew not above 500 feet, dipping into a variety of lakes in the area. I was shown the different types of landing (or alighting as its called  when touching down on water), including both rough water (where you add a touch of power during the flare to come down more slowly) and glassy water (where you position yourself in landing attitude over the land and continue with powered controlled descent).

It’s difficult to describe the fun and enjoyment this type of flying can offer – these small planes aren’t particularly powerful but are very maneuoverable- so I’ve put together a short (3 min) video instead:

I had looked at what’s involved in getting a FAA PPL licence that could be used during future trips. A standalone certificate is out of the question, requiring a student visa (and visit to the US embassy in London beforehand), TSA approval of your fingerprints taken digitally, additional training and flight logtime requirements plus a full checkride.

However, the FAA will issue a restricted PPL licence to foreigners for free, but you must take an hour’s flying  instruction and an hour’s groundschool to make it current – a so-called Biennual Flight Review. Fortunately, Jack Browns was both authorised to issue an airman’s certificate (the 61.75 piggyback licence) and my training in the seaplane counts as a BFR. So I now have a valid temporary FAA PPL Airman’s Certificate too, with no plans to use it yet.

PS: My official airman’s licence (the size and shape of a credit card) arrived in the post on 29 June – about 6 weeks after my trip. It’s embossed not just with my name, but confirms my entitlement to fly land or sea single engine plane provided I also have my UK licence (which needs to be current).