Time for a solo flight

Looking through my logbook, I’ve been taking a lot of training and instruction recently, particularly for the IMC course. With the weather looking good for the weekend, my intention was for a solo landaway – something that would improve my confidence and start enjoying what a PPL enables.

During the week there had been some short term changes to arrangements. After taking the differences training for the Robin aircraft, the only one free at the weekend, we then found out that flying activities at Lyneham were to be curtailed. The committee quickly arranged to operate four aircraft from nearby Kemble for the weekend, which must have involved a lot of complex logistics in moving them across on Friday evening and returning Monday morning.

With the weather looking good, I was keen to have a solo flying trip and just put into practice what I’d learnt. It’s definitely different on your own. After considering various options, I thought Welshpool would be a good destination – it’s not that much further than Shobdon where I’d been before, has a good long tarmac runway and is located in a beautiful part of Wales.

Without a briefing room at the airfield, I prepared in advance. Used SkyDemon for the flight plan, checked NOTAMS and weather. Welshpool website wasn’t quite as informative as some, but the NATS AIP publications were clear. Unlike Shobdon and other airfields, there aren’t complex noise abatement procedures but the circuit height is 1500 feet aal due to the nearby hills.

Having flown from Kemble, where I learnt to fly originally, I was comfortable with the procedures there.

When I arrived, I saw other club members walking towards the aircraft. I quickly took advantage of this and asked Roger to authorize my flight – that club rule still applies. After a quick explanation of my plan, and having convinced him that I had read the NOTAMs, he did so. He had two students with him and would be leaving for most of the day, taking it in turns with them, so wouldn’t be around later.

I took my time to checkout the aircraft thoroughly and get everything in place. There was no need to rush.  I used my mobile phone to call up for PPR from Welshpool and check they were operating normally. Brakes off at 10, I taxied over to the North Apron for checks as I had done many times before. Wind was quite strong, some 15 knots, but mostly down the runway. Took off on 09 and turned left, climbing away to the North.

I could see Aston Down and Nympsfield – both active gliding centres – and kept to the north. Remembering my FREDA checks, I kept ensuring the DI was aligned with the compasss, and spotted that I hadn’t turned the transponder on from standby during my pre-takoff checks.

Changed to Gloucester and passed south of the city, over the bends in the river, as I continued into Wales. It was a clear day and I could see for miles – the Malvern Hills being a good landmark. The picture below shows the “bends” of the Severn Estuary. 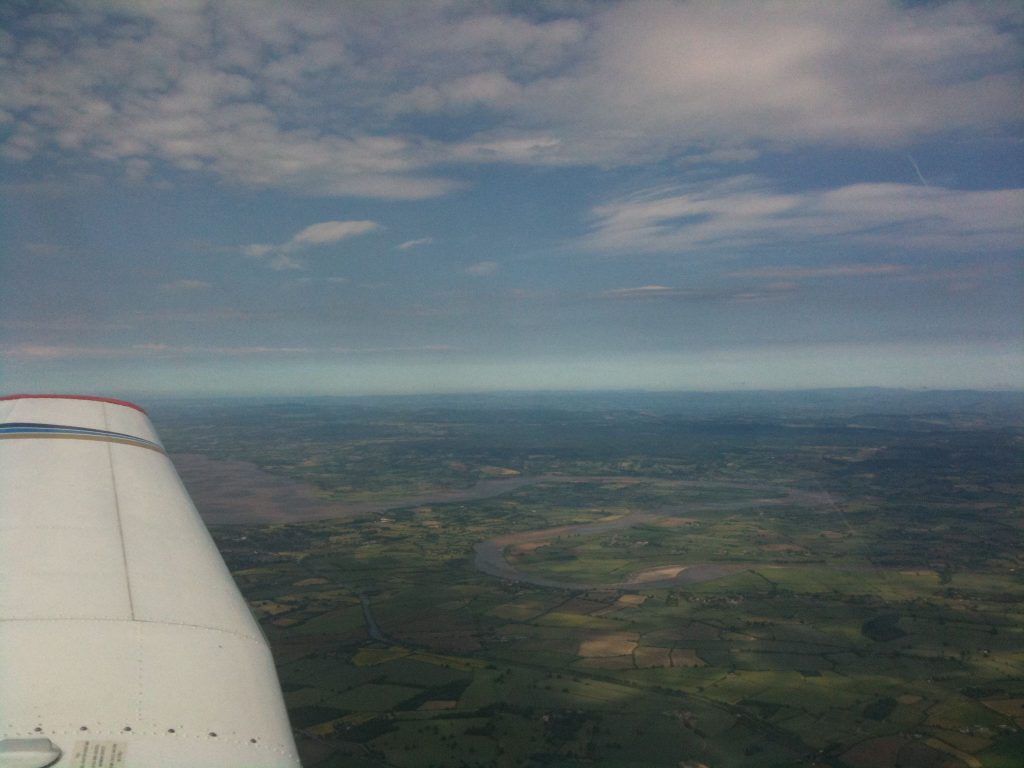 I was using the stopwatch with my plog, but also had both the GPS moving map display onboard plus my portable SkyDemon satnav. Welshpool also has both ADF and DME equipment, so I had plenty of options to know where I was. Visibility was good and I noted the times as I passed Ledbury  and Leominster. I climbed up quite high, about 4500 feet and could easily seen Shobdon as is passed by on my left.

The ADF started picking up well before the DME did. I checked the ident with its morse code – conveniently printed out on the SkyDemon plog – and switched the radio across to Welshpool A/G. Even when only 10 miles away, I still couldn’t make it out. Welshpool itself was clearly visible and from that, I worked out where the airfield should be and it then became obvious.

Circuit height is 1500 feet aal, taking account of the nearby hills. I had turned left to be able to approach the overhead from the correct direction, and turned in to arrive at 2500 feet aal, descending deadside and joining the downwind circuit. There was one aircraft ahead of me, and it vacated the runway as I turned final. I flew a slightly extended downwind circuit to take account of the higher circuit height. This also gave me plenty of time to setup the approach on final correctly. With the wind blowing almost straight down the runway, I flared – possibly a little high and settled down on the runway with plenty to spare. Taxied to the end and parked up with some helpful guidance from groundstaff.

Great place to relax in the sunshine

After checking in and paying my landing fee (£10 cash or cheque) at the small office, I walked through to the canteen. There’s a small decking area outside with a great view of the runway and countryside. It’s all self service, with a tea/coffee machine plus some great homemake cakes on offer (with an honesty box). During lunchtime 12-2 the canteen is manned and serves bacon baps and similar fare. I’m afraid I couldn’t resist. 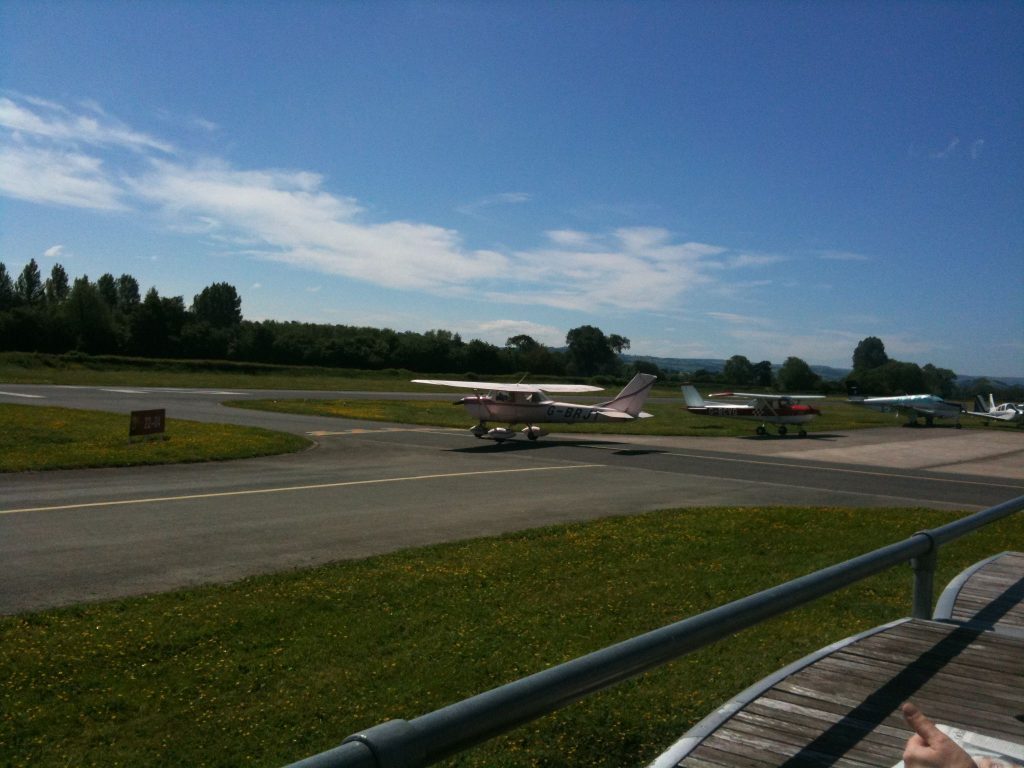 With the sun shining and calm wind, it was a pleasant place to pass the time. Not that different to Shobdon perhaps, but with more hills to look at. There was plenty of reading material around to pass the time. I didn’t leave the airfield, but there is supposed to be a good walk along the canal not far away and a bus service into town. I saw one pilot unload a folding cycle from his luggage compartment and thought that would be a great idea for my next visit, time permitting.

With the aircraft having another booking at 2pm, I needed to get going. Without tht need to worry about noise abatement procedures, I simply climbed straight ahead and when over Welshpool turned right onto course for Kemble. Gloucester approach was busy (a common frequency for tower and approach in use), but I got my request in for Basic Service which was accepted.

As I flew back towards England, I could see a line of rain clouds hanging over the Welsh hills and diverted north to avoid them. I missed the worst of it but the windscreen was washed clean by the light rain (I was still in VMC).

Reporting overhead the bends of the river, I then switched to Kemble who confirmed they “had my details”.

Approaching again from the North West, I kept well north of Nympsfield and Aston Down gliding, approaching Kemble from the North at 2000 feet aal. A fairly straightforward overhead join found me downwind in the circuit behind a Eurostar. I did extend downwind slightly, but not enough. On finals, it hadn’t vacated the runway in time for me so I called a go around. Pretty much the same situation on the next circuit, except I had allowed more spacing and the aircraft in front of me cleared in time.

Perhaps I should have called finals a lot earlier – as sometimes happens, the radio was busy with passing traffic and others, meaning I only just got my call in and received “land at your discretion” on short final. With a pretty stiff 20 knot breeze, some 45 degrees off, this was a crosswind landing for sure. I only put in 2 stages of flap and kept the speed up above 70 which helped, but meant I stopped past the normal first turnoff point.

Taxied back, filled in the paperwork,  put the covers back on, paid the landing fee and called it a day. Met with the next hirer who was planning a landaway to Dunkeswell, returning after hours. Checked he was happy with the fuel situation and reported no faults with the aircraft.

Trips like this do boost my confidence and re-inforce my learning. I made a few minor mistakes (not all of which I’m going to list here), but this is the kind of flight that makes it all worthwhile.