The plan for today was to take a friend and two of his teenage lads up for a landaway from our club’s Kemble base. Simon had asked to fly over Carmarthen in Wales, where a friend has a house in Ferrybridge nearby. This is only a few miles away from Pembrey airport, which has been on my list of places to visit for a while, so the destination was quickly agreed. We planned to drive up for a departure at 1pm or soon after.

With the onset of winter and nights drawing in, time would be a limiting factor. Sunset was 16:33 and Kemble doesn’t provide lighting for night flights except by prior arrangement (and substantial extra cost). We’d have to be back by 17:03 at the very latest.

Watching the weather forecast closely during the week, it was great to see the day itself have great visibility and little wind from Kemble westwards – almost ideal conditions.

An eventful journey to the airfield

One of the lads dropped out due to illness, and Simon drove us there as planned while we munched some sandwiches en-route. Just after turning off the A46 towards Tetbury, we saw a car about 3 in front simply not take one of the corners. It smashed through a low wall into a field beyond, narrowly avoiding flipping over and came to a halt on level ground. We stopped to check that the driver was OK – he was more embarrassed than anything else. The car would have been a writeoff, but fortunately no injuries. I did wonder if this was a forecast of an unplanned aircraft runway excursion ahead – it certainly shows the implications of temporary loss of attention in a dramatic fashion.

To save time, I’d called one of the instuctors the night before to ask for authorisation. I’d also emailed the temporary membership forms to my passengers in advance, so these were already filled out.  Flight planning including PLOGs, NOTAMS and weather had all been done at home beforehand. This meant I just needed to fill in the tech log, grab some spare headsets and we were ready to go. I’d called the previous pilot who had booked the plane for a flight in the morning immediately before us, and he had confirmed he would be making only a short flight to Old Sarum and expected to return in good time.

Although Dave arrived back a few minutes late, he had already refuelled at Old Sarum (the fuel prices are lower there) and so it was a pretty quick handover. Engine start was at 13:20 and we were airborne around half past.

What a pleasant day for a flight

Although there was a bit of haze, we got great views as we headed west. Dursley, the power stations and the Severn Bridges were all easily visible. With a Basic Service from Bristol we were handed over to Cardiff as we crossed into Wales, heading directly for BCN using the VOR with my trusty SkyDemon GPS showing our direct route. We did fly directly overhead BCN VOR, but I couldn’t manage to spot it this time – it had been obvious before.

Simon and Josh were both snapping away with their cameras, getting many good shots of the area. We took a few extra minutes to circle overhead Merthyr Tydvil where Simon has been involved with one of the building projects there to get some extra shots.

Returning on track, we could easily make out Newport and the Gower Peninsula. As we  continued towards Pembrey, Cardiff told me to switch to Swansea Information – instead I said I’d change directly to Pembrey. It turned out later that Swansea were only operating an Air/Ground service so wouldn’t have been able to give me a Basic Service anyway, as I found out later.

Inbound to Pembrey, there was only one other aircraft on frequency – taxiing for fuel which surprising required to go via the runway itself. Pembrey Radio were quick to respond to my call, and we could easily make out the airfield dead ahead. Standard overhead join for 04, wind 350  @ 8 knots. The airfield used to have a much longer runway, half of which is now used for car racing. Final approach is directly overhead the racetrack, with lots of smoke from tires squeeling round sharp corners to distract you.

The runway itself has a declared distance of about 800m and width of 30m, but in fact is 45m wide. This gives it a different perspective from other shorter runways, and so I confess I made the usual mistake when landing on wide runways of flaring and rounding out a bit too high so that as the stall warner came on we must have been a few feet above the runway. Didn’t bounce though and the passengers seemed to think it was quite a smooth landing, but not the greaser I would have preferred to pull off in such nice conditions.

After landing, I consulted my airfield chart and turned off the taxiway at the end. Air/Ground quickly told me that I should do a 180 and backtrack the runway to exit at the midpoint, parking beside a couple of other visitors. After shutting down, someone came to welcome us and walked us to the airport building where we paid the £12 landing fee. No insistence about yellow jackets here, although I had one handy just in case. 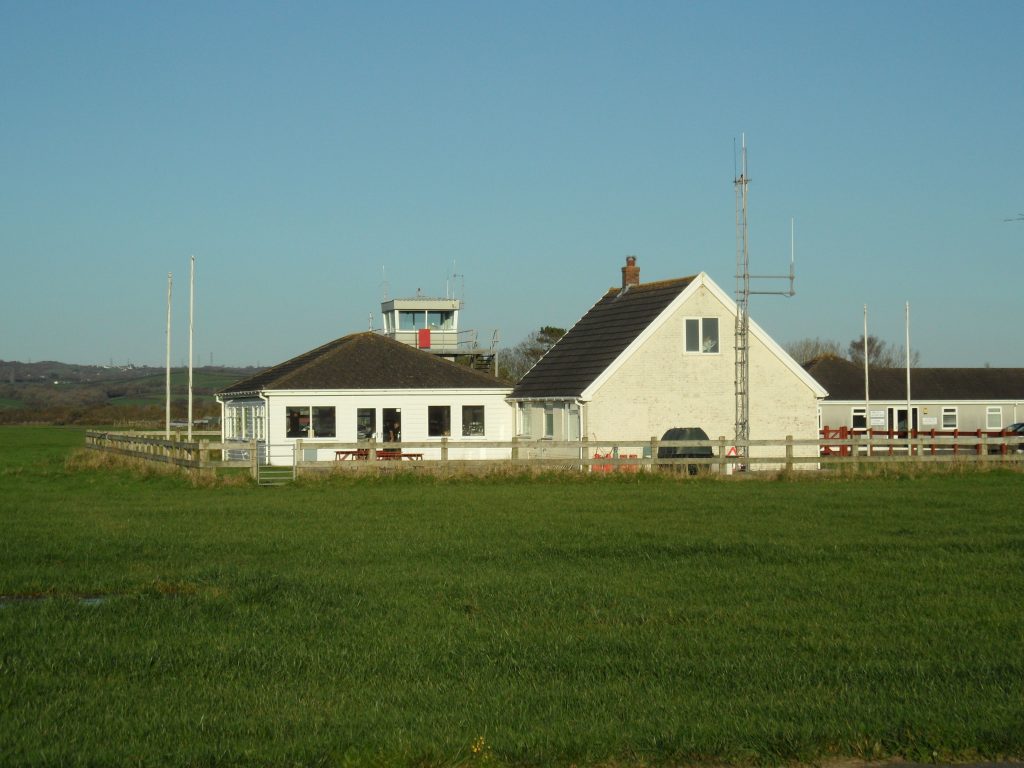 The airport buildings are very nice, clean and attractive. We enjoyed a coffee and a cake – the latte was very well made. There is a wide range of cooked food available. The restaurant has good views of the runway and there is also outside seating. There was little other traffic around at that late afternoon time on a November Sunday, perhaps 4 other movements including a Sirrus visiting from Blackpool and a flexwing microlight. 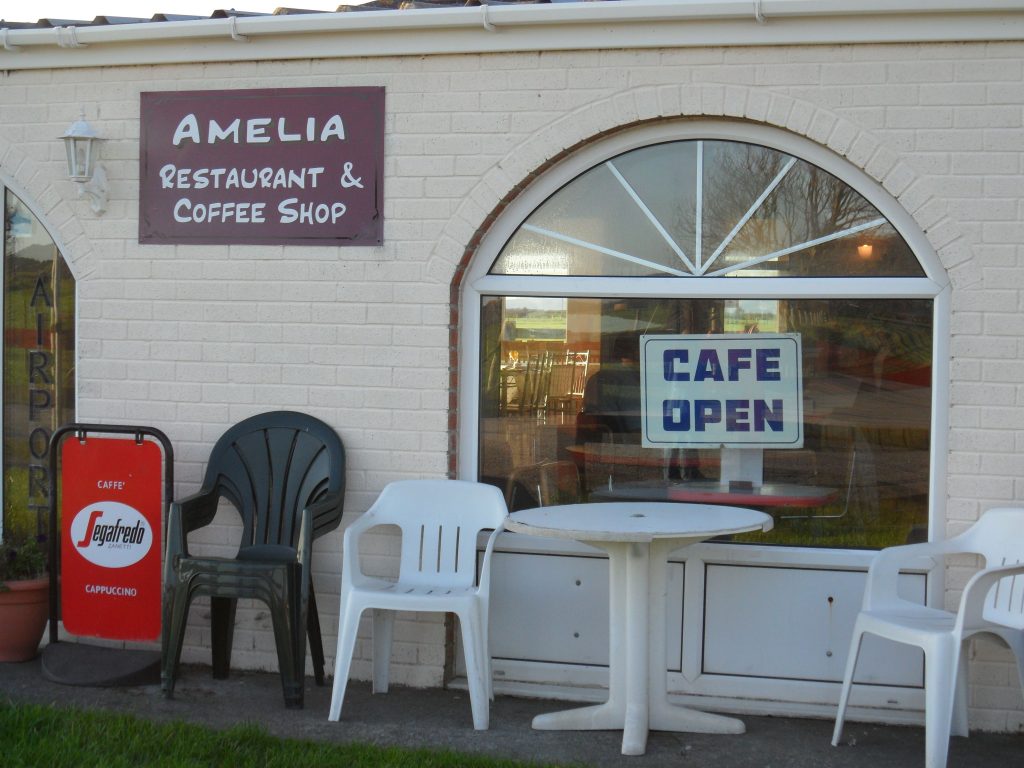 Apparently, some £3.5 million has been spent on the airfield since it was bought. There aren’t any commercial flights today, although facilities are available to do so. Southwestern Airlines operated a 9 seater aircraft a few years back, but are no longer in business. The NDB wasn’t operational when we visited (I think it’s been offline for some months), and the instrument approach is no longer available. Pembrey is inside a military area, with active Danger Areas during the week. Although open 7 days a week, weekend visits don’t require any prior notice to cross the Danger Area – something I understand is easily arranged but requires 24 hours prior notice. 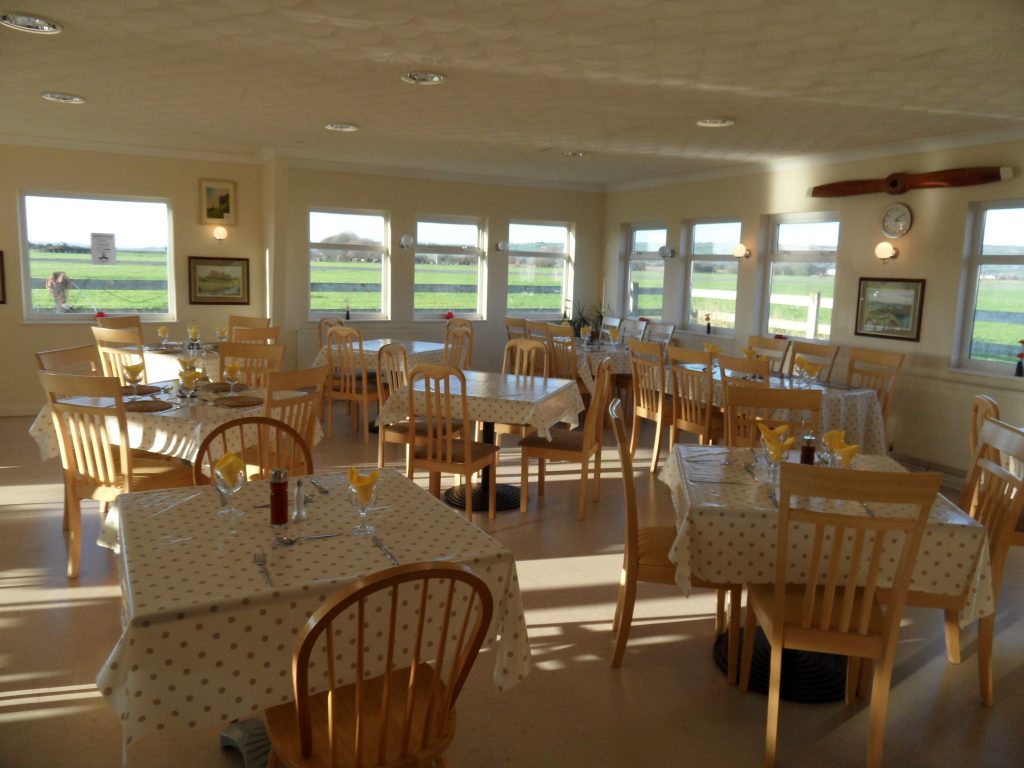 With time pressing, we returned to the aircraft within half an hour. In my haste, we were all strapped in before I realised I hadn’t done a proper walk around check. Thinking back to how all my instructors had always visually checked the fuel and oil before every flight, I got out and did so – wouldn’t want a seized engine or fuel leak to spoil my day. With no other aircraft around – the Sirrus crew were waiting for us to depart – we quickly backtracked and took off. We spent a few minutes flying over Ferrybridge to the north east so that Simon could take some photos of his friends house. This is very close to an active danger area that borders on the west side of the river, so we kept a careful eye on the GPS to avoid infringement – this meant that we weren’t best positioned for photos but I think got some good ones given the late afternoon sun from the west.

No transit through Cardiff

Flying back over Rhossili and south of the Gower, I contacted Swansea Radio – this was when I realised that they were only operating an A/G service so couldn’ t offer me a Basic service. I kept a listening watch, and switched to Cariff Radar as we coasted out south of Swansea. I could hear that the Cardiff controller was working hard, handling several commercial flights. Initially, he asked me to standby but later came back and gave me a Basic service and squawk code. He said he would try to grant me the transit I asked for, but warned me this might not be possible because they were so busy.

The GPS earnt itself today, allowing me to fly close (maybe 2 miles) to the edge of controlled airspace, underneath and to the side of these restricted areas. The views as we fly up the Bristol Channel were excellent, with clear visibility to both coasts and well beyond. I had to fly out to mid channel before turning back towards Flatholm island, easily identified through its lighthouse at one end. One area of airspace had a limit of 1000 feet, so I was down to about 700 feet at one point.

As we reach Flatholm, we were asked our routing intentions, given a squawk code for Bristol and handed over. It was then that the controller told us he couldn’t see us on his radar because we were too low! We routed over Clevedon, great view of the pier, Avonmouth, Filton airport (ATZ closed but where the controller told me to watch out for Air Ambulance helicopters that might launch at any time) and headed back directly to Kemble.

Dark clouds on the horizon

A long line of dark clouds appeared ahead – we were close to sunset now. Changing to Kemble, our estimated arrival time was within a minute or so of sunset. Kemble provided me with the usual QFE and runway in use, and I asked for local surface weather/wind. I also asked if I could fill up with fuel on my return, but they advised that they closed at sunset and I was too late.

Just as I was about to join crosswind, Kemble announced closure of ATC, so I made the calls to Kemble Traffic – there was no other traffic on frequency. I saw one vehicle with a yellow flashing light crossing the runway threshold when I was on base. Turning final, I made another traffic call, crabbing into wind and used the rudder just before touchdown for what I thought was a much smoother landing than before.

Taxied back to parking and I could see that someone was still in the Tower. I think that although they were officially closed, if anything had happened, then action would have been taken. Darkness quickly drew in as we pulled the covers on and finished up the paperwork. We had landed at 16:36 and recorded shutdown at 16:40.

I now have 59:55 of PIC time, tantalisingly close to the milestone of 60 hours PIC which gives me an increased period of 42 days between flights before I need a currency check with an instructor. Even if my next “flight” is just to the pumps and back, I should manage to reach that goal. I contacted the next pilot booked to use the aircraft to apologise for not refuelling it – shouldn’t be a problem, but helpful for him to know it should be done before rather than after the next flight.

I’d recommend Pembrey as a good place for a landaway, especially in good weather such as we had. The views of the area were varied with great scenery and the destination was welcoming, easy to land at and good facilities. I don’t think its too far to walk to the beach either.