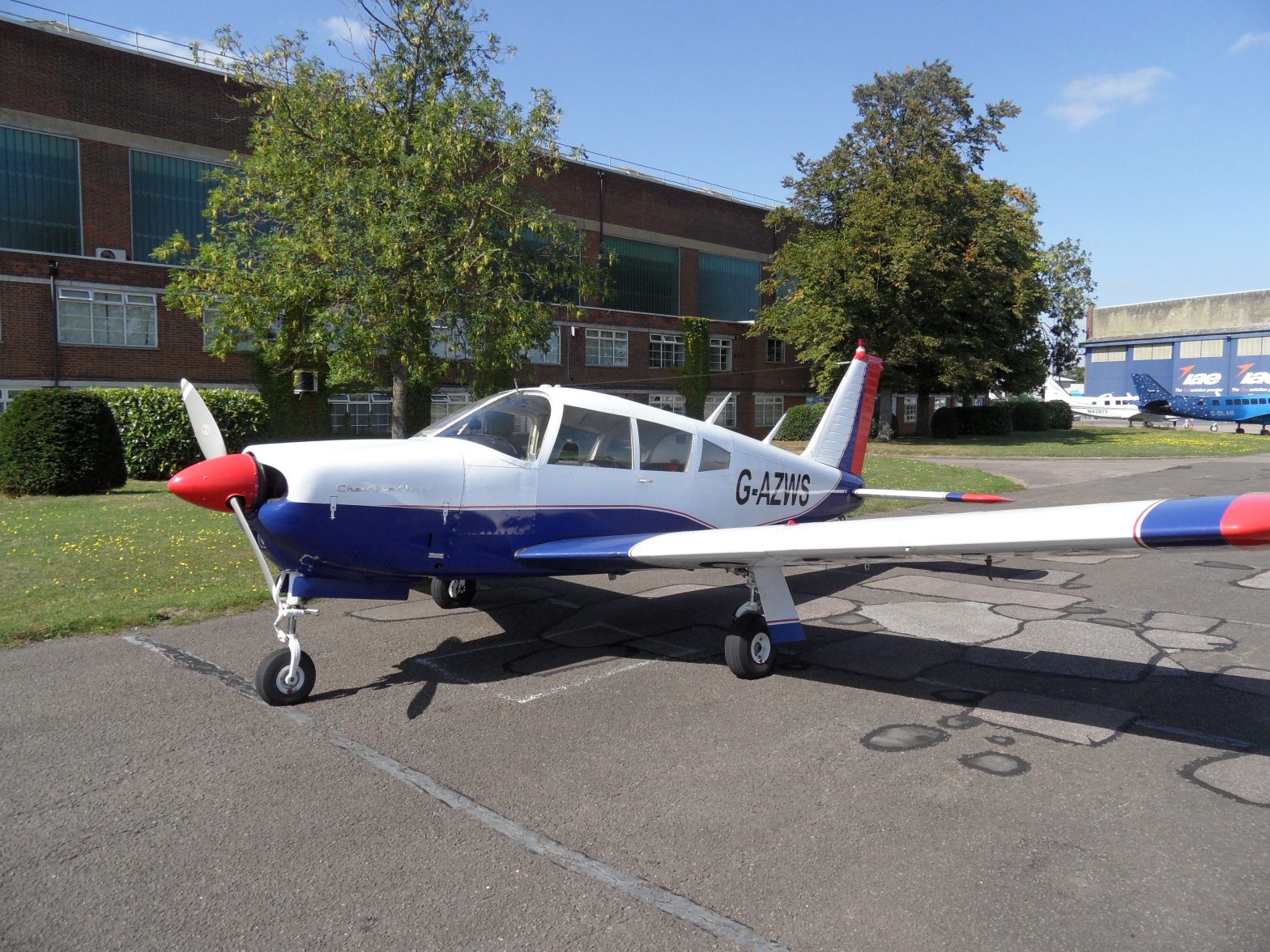 The club fleet includes a Piper Arrow – a step up from the Warriors I learnt on and normally fly. This has a more powerful engine (180bhp instead of 160), retractable undercarriage (much less drag, so goes faster) and a variable prop (more efficient, so also goes faster). These features enable a cruising speed of around 150mph (approx 130 knots) with similar fuel consumption.  It also has an autopilot, which can follow a VOR track or simply a heading and is IFR equipped. I’d been a passenger in it a few months back, when Andy flew it on a short local flight to Gloucester and back.

This is more of a “going places” aircraft than for practicing circuits, and so isn’t used for general training. The additional features means that differences training is required before you can fly it solo. This isn’t just a club requirement, these so-called “complex” features are found on other cruising aircraft and require a one-off instructor validation in your logbook. While I believe there’s no legal requirement to keep current on complex aircraft, club rules require a checkout if you haven’t flown it within the last 42 days (60 for those with more than 100 hours PIC). So this means I would have to ensure I fly it at least that often no matter how much I flew the Warriors.

I had put off taking the differences training until after I had completed my 100 PIC hours, but recently changed my mind. One of the Warriors will be out for some weeks for major maintenance work, and with growing demand for those remaining, the Arrow would be a better choice. It’s IFR equipped too, although some of the avionics are a bit on the older side. Although it costs a little more per hour to hire, the 50% increase in cruising speed means that longer trips are cheaper overall.

With the weather having been unusually good all week – a high pressure system was sat over the UK all the time – the forecast was for that to continue through the weekend. Fog and haze were expected, with visibility improving throughout the day. My instructor, Mike, texted me the previous evening to warn me that he might not be well enough to fly the following day – he had come down with a cold. I was also fighting one off, with several colleagues off work that week. Fortunately, things came together on the day and we were on.

In retrospect, I wouldn’t have enjoyed flying anywhere in the murky haze that we found ourselves in. This was a much better use of the time instead.

Mike had sent me some material to read up beforehand, which explained the theory and engineering of variable propeller designs. He ran through a comprehensive set of slides in the club office, answering the few questions I had, and tailoring the discussion to the aircraft in question. Both retractable gear and variable prop were covered, including all the emergency procedures. There were clear photos of the few extra controls involved, including the emergency gear down lever which I hope never to have to use.

I had preflighted the aircraft before Mike arrived, finding only that the navigation beacon wasn’t operating. This proved to be a popped out circuit breaker, which was quickly resolved. Mike showed me the undercarriage, pointing out the locking mechanism that ensures it stays down when it’s meant to.

The starting procedure is slightly different to the Warrior. Being fuel injected, there’s no need to manually prime by pumping it and there’s no Carb Heat to turn on and off. However, there is an “Alternate Air” control. Starting with the mixture control fully off, the mixture is advanced as soon as the engine catches. It idles at around 1400rpm, faster than the 1000 of a Warrior.

After the usual power checks, we departed on 08 with virtually no wind. The Airspeed Indicator is marked in MPH, and we gently lifted off at rotation speed. The more powerful 180bhp engine meant that I needed to use more right rudder to compensate for the stronger P factor. As we passed the end of the runway, I dabbed the footbrakes and pulled the gear up lever. The aircraft seems to shoot forward at this point, speeding up because it’s not got the drag of the wheels. Rather than speeding up too much, we climbed up at 85mph – the climb rate seemed a bit quicker than the Warrior. There was haze all around and long range visibility wasn’t good, although we could see the ground directly below us.

As we climbed, it was clear to see that the manifold pressure (effectively the throttle setting) dropped by 1 inch every 1000 feet – just as the book said it would.

Heading across to Gloucester, we switched to their frequency and received a basic service. We did some general handling to the North West, around Ledbury – keeping pretty high up most of the time, between 4000 and 6000 feet. Mike showed me how to adjust the prop lever and set cruise speed, then we practiced a circuit procedure including gear and flaps down. Unlike other complex aircraft, the Arrow will fly with the gear down at up to 150 MPH, but it’s recommended to slow down to 120 before deploying it.

We ran through some of the emergency procedures, including catching me out by turning on the panel lights. A “feature” of the Arrow is that this dims the 3 green gear down lights, which can easily catch out the unwary. It’s the first thing to check on the emergency gear not down checklist. Mike advised me that if I should find myself unable to lower the gear when in the circuit, concentrate on flying the airplane and going somewhere safe to sort it out (e.g. climb above the overhead if clear).

We also practiced stalls and a PFL from height, which would have got me into a field. Although there were plenty of fields around, they all seemed to be ploughed up with deep furrows at this time of year. With calm wind, the orientation of the field wasn’t really a factor. After selecting one, I made a right hand turn to lose height and position myself for it – losing sight of it briefly (which Mike warned me I might do) – but regaining the view just as I was turning final.

As we passed Gloucester and returned to Kemble, it was difficult to make out the airfield in the murk. We were still speeding along at some 150MPH, so Mike encouraged me to slow down before getting into the circuit itself. When moving the prop lever forward, the engine makes a strange noise as the system adjusts to the new setting, then sorts itself out.

Kemble offered me an overhead join for 08RH, but since we were approaching from the north I arranged for a crosswind join instead. Having slowed down to 120MPH by now, I deployed the gear down which slowed us further. I didn’t respond quickly enough and we lost height to about 800 feet. With another aircraft taking off, Mike was keen for me to get back up to circuit height before we crossed the threshold on the crosswind leg.

I made three approaches in all. One was low and I had to drag it in, the last I cut the power a little too early as we crossed the numbers and the landing was a little heavier. With little or no wind, these were ideal conditions to learn the different handling. Mike advised me to keep the power on until the round out – unlike a Warrior, the Arrow will simply stop flying and dump you on the runway if you slow down too early. It’s also important to keep the nosewheel up, to reduce the impact. With a comparatively smaller tailplane and heavier engine up front, it’s important to pull back hard on the yoke during this final stage of landing.

We refuelled, taxied back and debriefed. Mike signed my logbook, and I’m now qualified to fly the Arrow solo. This being my first flight with an instructor during my second year as a PPL holder, it also completed the requirement for 1 instructor flight hour (the European equivalent of a US BFR, Bi-annual Flight Review). I’ve therefore also completed the requirements to revalidate my PPL licence for another 2 years until almost the end of 2014 – it just needs a bit of paperwork signed off towards the end of the year.

All in all a successful day and best use of what was pretty murky visibility all round. I think it will be a bit daunting to fly the Arrow solo straight off, so perhaps I’ll ensure there’s another pilot along for that next ride.