We’d originally planned a full weekend trip for this club flyout, with an overnight stop in Dinard, but the continuing poor weather put paid to that. The initially long crew list had gradually shrunk with members dropping out for a variety of different, legitimate reasons. In the end, we were down to 3 pilots taking two aircraft to Cherbourg for the day. However, the weather did look very promising with only the threat of a few light rainshowers. The stronger winds would be straight down the runway both on departure from Kemble and arrival at Cherbourg. After several phone calls, I submitted flight plans using SkyDemon the evening before and emailed off the GAR form to the HMRC.

We met at the airfield at 9am, pre-flighting and loading up with safety gear. Both aircraft were fuelled to tabs, which gives around 4 hours of flying time, but I rang to ask if the bowser could come round and top us off – thinking this would save time by not refuelling at our destination. That wasn’t possible, so we started up around 10am as planned. Our flight plans were OK, but the tower was concerned that I hadn’t sent them a copy of the GAR form.

After departure, we headed off to the south on track to Melksham. Bristol Radar were keen that we were aware of the Weymouth restricted zone (where the Olympic sailing events will take place). We flew overhead Frome and skirted the Salisbury danger areas, passing Compton Abbas to the west  (it always seems a bit difficult to pick out). Bruce, in SNUZ, flew close to us in a loose formation and Bristol wanted to check we knew he was there. Switching from Bristol to Bournemouth, we asked for and were granted a transit through the western part of their airspace, coasting out at Sandbanks. They were busy, since their ILS wasn’t working and they had to co-ordinate an aircraft being given a radar approach from Solent onto a different runway from the active one.

I asked Bournemouth if they knew whether danger area 026 was active, but they couldn’t confirm this – it should only be active during weekdays – and I could hear they were pretty busy. So we changed to Plymouth Military to ask them – no reply – perhaps they are all busy manning the Olypmic Atlas control desks. Switching to London Info, they were also busy but I managed to confirm the danger area was inactive before switching directly to Deauville.

We crossed into French Airspace at BOLKO, a convenient waypoint some 10 miles north of Cherbourg and were given a Squawk Code. After a few minutes, we were asked to contact Cherbourg tower, who already had our details. They were keen that we knew of SNUZ, but we couldn’t see him because he was directly behind us. Although the chart marks the airfield as using Left Hand circuits, we were told to join right hand downwind, which was relatively easy to do. There were no other aircraft to worry about, except a jet holding for us to land. After completing the downwind checks, I turned onto final and was cleared to land. Boy, what a long runway!

If I had visited before, I would have realised that landing on the numbers isn’t ideal. It’s a couple of miles to the turnoff! We were encouraged to expedite our taxi and turn off on the left towards the tower, with SNUZ being cleared to land after us.

Knowing that refuelling can sometimes take a while, we asked to taxi directly to the fuel point. We waited…. and waited…. and walked around to see if someone would come to help us. I went into the terminal, but the customs/Douane officer was keen to see my passport and didn’t speak enough English to answer my questions. The aeroclub had guests who spoke English but didn’t know the procedure.

In the end, we radioed the tower who then called for a Fireman (Pompier) to come and fill us up. They do take credit cards, but only Visa. We didn’t need to radio for permission to taxi to parking at the other side of the apron (we did call up the first time, but the surprised tone of the reply indicated this wasn’t really needed – a refreshingly pragmatic approach compared to some UK airports) 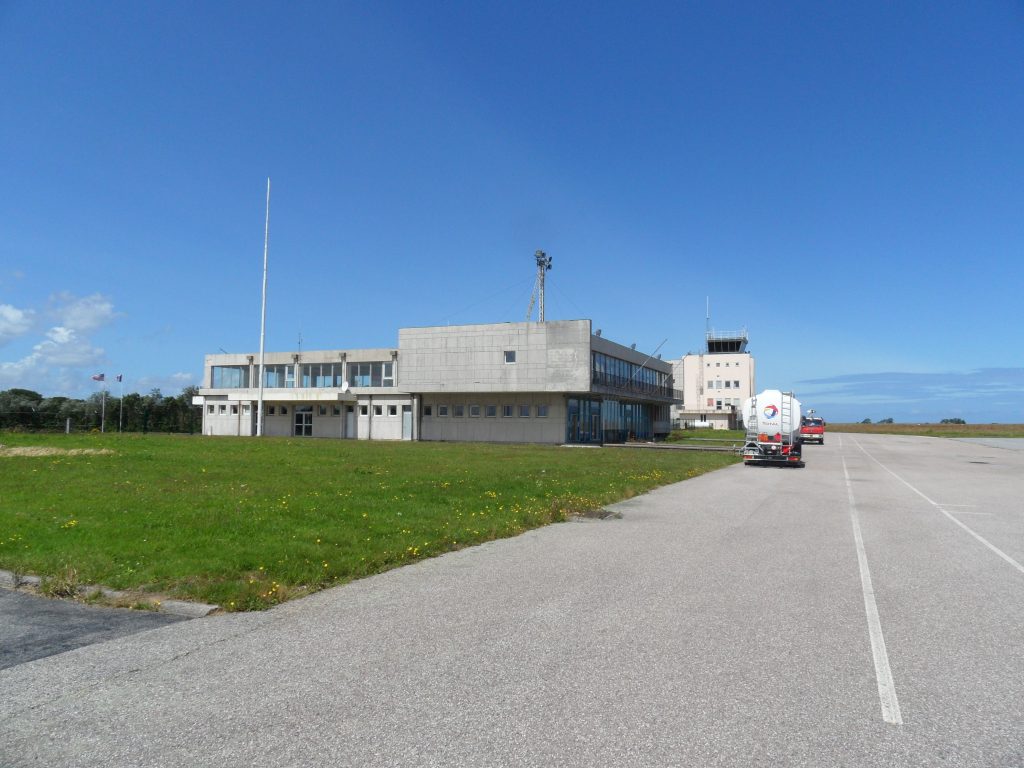 Terminal buildings at Cherbourg viewed from the fuelling point

We entered the terminal building and showed our passports before walking through the the airport office. The same fireman then took our landing fees of 12 Euros each and called a taxi into town – there was nothing open at the airport itself, even the Cafe is shut on a Sunday. The taxi arrived in about 15 minutes and drove us the 11 kilometres into the centre of town, dropping us at the Cafe de Theatre at a cost of 38 Euros (ouch).

We walked around to the harbour front where there were several restaurants to choose from, with both inside and outside seating. With relatively little time, we elected to sit inside one that looked like it would give more speedy service. The food was good and came quickly, with the staff working hard to keep everyone served. We then walked around a little – there were few shops open – before returning to the main square and calling for a taxi. It came in about 5 minutes.

We took the same route back out to the plane – effectively exiting through the arrivals hall. There is a mobile number to call if they are closed, but one of the staff was passing out and let us in. The Douane knew us by now and waved us through. While Dave pre-flighted for the return leg, I spoke with a crew who had flown in from Shoreham and had stocked up with several bottles of wine. The wind was quite strong now, but very much straight down the runway as evidenced by the windsock.

We did call for start, and then for taxi. The tower asked us to do our power checks just in front of the tower, and then we entered and backtracked the runway before takeoff. Dave was quite enthusiastic with the backtrack, going back quite a long way, but there is nothing more unhelpful than unused runway behind you.

After departure, the Shoreham aircraft asked how much runway there was at the intersection and decided to take off directly from there without backtrack – showing us up somewhat. Departure to the north was really straightforward – you just have to remember to turn north before entering the restricted zone straight ahead. We were asked to report leaving the control zone, and from there to contact London Information while still in French airspace.

London Info were really busy – it being a nice sunny Sunday afternoon – and we heard one caller being told to standby – you are number 5. So after a while, we just changd directly to Bournemouth who gave us a basic service and more useful local traffic information. We asked for, and were granted a similar transit through their western zone at not above 3000 while still some 20 miles out.

As we coasted in over Sandbanks, we could see a rainshower off to the west, but thereafter the weather was really very good and visibility was excellent.

The area around Compton Abbas was quite busy and we saw several gliders and other aircraft to the north west. As we approached Kemble, Dave decided to make a left base join and descended gently into the pattern to make a smooth “greaser” and land on the numbers.

We could almost have made the early intersection turnoff, but initially asked to taxi for fuel. We quickly realised we could instead ask for the bowser to come across and refuel both aircraft, so did that and backtracked to the exit and parking. SNUZ landed about 15 minutes later – Bruce had been held up when departing and had to await other arrivals for quite some time. The  bowser drove up directlybehind SNUZ and quickly topped up both.

After putting the covers on and completing paperwork, we planned to go for a coffee at the AV8 cafe in the main area – sadly it closed at 5 as we arrived. However, I met up with (another) Dave (who had flown with me to Dunkeswell on my previous flight) outside AV8 where we chatted for a while.

All in all, a very satisfying day.