A full load of passengers ready for check-in

I’m still at the stage of taking friends up for a short flight. I have a (short) backlog of potential victims. Perhaps word may have got around that I’m  not a complete loony. Belinda had asked me to take her for a flight, and also her daughter and nephew, Ben. She couldn’t have picked a better day, with almost clear sunny skies, excellent visibility all round and only a light crosswind from the north.

With 4 up, of which 3 were adults, I had to do a thorough weight and balance calculation. I had spoken to the pilot of SNUZ the previous day, and confirmed that the fuel was about half full. A quick check on the W&B spreadsheet confirmed we would be within limits, and so I swapped my booking across and texted the pilots flying earlier in the day not to fill it up (just in case they had decided to call for the bowser to come and do so).

Quick lunch outside at the airfield

We had a snack lunch at the AV8 cafe at Kemble before taking the covers off and preflighting. A bacon butty was just what was called for, and it came quickly despite the place being so busy. There had been quite a few visitors who had flown in.

Everything was pretty straightforward and my passengers were happy with the short briefing, finding it quite amusing that there was only one door – “Emergency exits are here and um, here and um, well it’s this or nothing”. Although one of my passengers was 6′ 4″, we all fitted in OK (but the full and free control check did need the seat pushed back). I ignored a mumbled complaint about how long the checks were taking – these things take as long as they need to – and shortly we were started up and taxiing across for power checks.

With a wind from the north, directly crosswind, the 6 or 7 knots looked more blustery than it first appeared. We watched the shiny new Tecnam (a modern equivalent of the Cessna 150) from Cotswold Flying School land on the grass – it seemed to be being blown about a fair bit on short final. I did give it full deflection on the ailerons before starting our takeoff run, gradually easing back to wings level before gently lifting off and departing to the South West. The full passenger load did make a noticeable difference to the takeoff run, but was less obvious in the air.

Lots of landmarks to identify

Despite having lived in an area for many years and knowing it like the back of your hand, it takes time to adjust to the view from above for the first time. Being autumn, there were a lot of visitors at Westonbirt Arboretum and we could easily identify many landmarks both near and far. We flew down past Badminton to the M4 Junction 18 and on down the valley into Bath where we circled around Belinda’s house. Colerne, Charmy Down and Landsdown were all clearly visible. I’d already been talking to Bristol Radar and  been allocated a squawk code, so when I then asked for a direct transit to Filton it was immediately granted.

I’d tuned into Filton ILS and acquired the localiser, flying on track but not descending on the glidepath – we flew over Filton at around 1500 feet keeping an eye out for any helicopters which might lift unexpectedly from there. The ATZ is closed at weekends, but the air ambulance and police helicopters based there remain operational. Across to the Severn bridges and then turned back towards base. 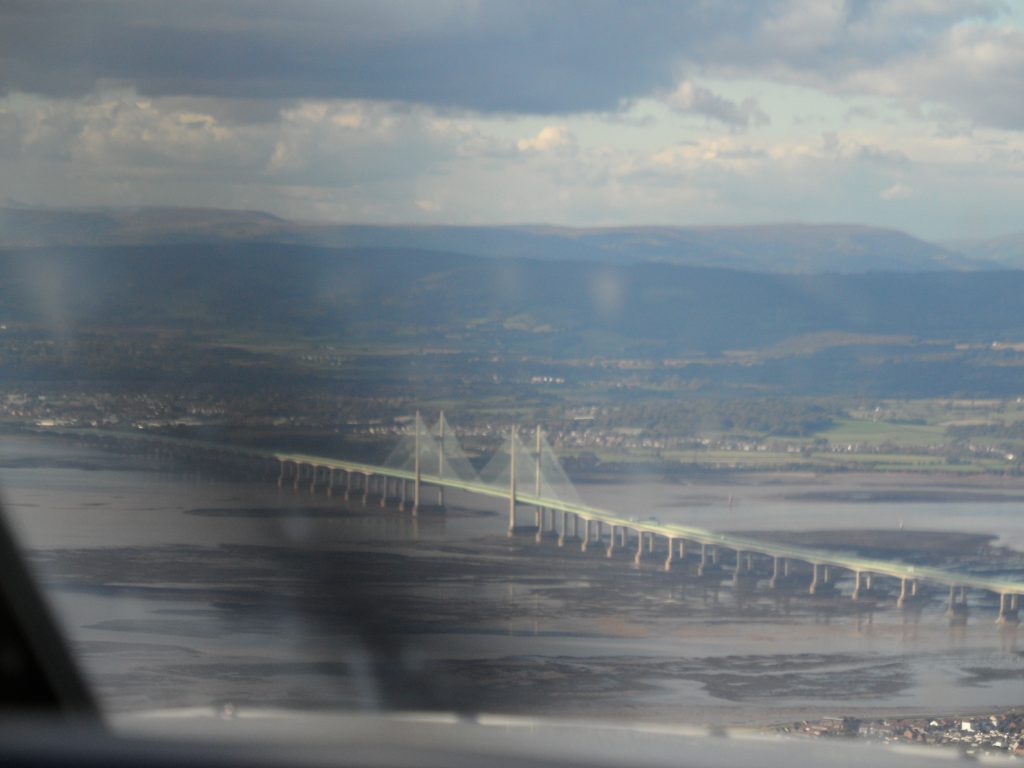 I let Ben have control for a while, and not unsurprisingly for a novice then found the height increasing and direction wavering a little, but he enjoyed having a go. Spotting more landmarks, we returned directly to Kemble and with several aircraft in the circuit, it was easy to do a full overhead join and land gently on 26 while accounting for the 6-8 knot crosswind from the north. Definitely one of my better landings.

After filling up with fuel, my passengers helped me pack up and put the covers on, and we were done. The weather couldn’t have been much better, especially considering the time of year, and all my passengers seemed very happy with their afternoon out.