It’s been a cold March – one of the coldest on record – with heavy snow affecting many parts of the UK. The forecast for the Easter Weekend at the end of the month looked fairly stable – quite cold, cloudbase of 2,000 to 4,000 feet, little chance of rain (or snow), an Easterly wind of about 10-15 knots. Not ideal, but OK for a short flight somewhere.

I arranged to meet one of the other club members for lunch. He would fly his own aircraft from his home base, and I’d fly the club Arrow from Kemble. In the end we decided upon Leicester, another new airfield for me. Dom flew a YAK52, the old Russian fighter aircraft, which he has a share in. It’s range is only about 2 hours, so he didn’t want to travel too far and needed to refuel before returning.

After chatting to a few other club members, I preflighted and found that the Arrow had just had a 50 hour service. The only thing out of place was the fuel tester, which I had to borrow from another aircraft. Although cold (about 2C), it started first time. Kemble was using 08 because of the Easterly wind, and I was surprised to be asked to do my power checks at the upwind end of the runway (at D-site) where we normally do them for Westbound departures. The reason became clear when I was told to backtrack the main runway, presumably saving the grass taxiways from wear and tear.

The flight was pretty routine, with some low dark clouds on the horizon that turned out to be little trouble when I reached them – the visibility was never that restricted. With sub zero temperatures, I wanted to remain clear of cloud to avoid the buildup of ice. It was quiet on the radio, and I practiced some tracking by instruments to and from the Daventry VOR. I’d also got this year’s updated CAA chart, and had plotted the course to follow on it. As part of my FREDA check, I tried to work out what I’d say if asked my position – it’s easy to become too reliant on the GPS.

Brize Radar bade me farewell north of Banbury, and I tuned in to Coventry Radar. The frequency wasn’t listed on my SkyDemon plog for some reason, but was easily read from the chart. There has been some debate about the old frequency reference cards, which have been discontinued in printed form but are still available to download for free. I’ve never used those, but might reconsider downloading one for use in these cases.

Taking a direct route from Daventry VOR to Leicester, I had to detour around the gliding site at Husband Bosworth, where I could see it was active with a tug taking off towing a glider.

Although my primary GPS unit (a cheap Chinese Windows CE/SkyDemon ) worked well (apart from complaining about low battery whenever not connected to power), my iPad 1 crashed again trying to use SkyDemon with a remote GPS receiver connected via Bluetooth. Further research on the SkyDemon forums has come up with a long list of iPad features to be disabled to make space and avoid the problem – will try this on the next flight. But I don’t have a lot of confidence in this configuration and will need to review whether its worth using or upgrading to a new iPad or Android/Nexus.

My pocket camera which has worked well on all my flights up to now also failed to operate. Changing the battery didn’t help either. This was simply because both batteries were drained after extensive use at a recent work event. It also explains why the photos are so limited on this writeup – I used my camera phone instead.

A great reception at Leicester

Although only an Air/Ground radio service at Leicester, I felt that all pilots were kept aware of others both from the radio operator and pilot reports. I did my best to follow the noise abatement routings and space myself in the circuit. After a good approach, the landing was a little heavy but on the centreline. I taxied along the snow covered taxiways and parked up. Dom arrived a few minutes later and then went to refuel, while I headed for the cafe to wait for him. 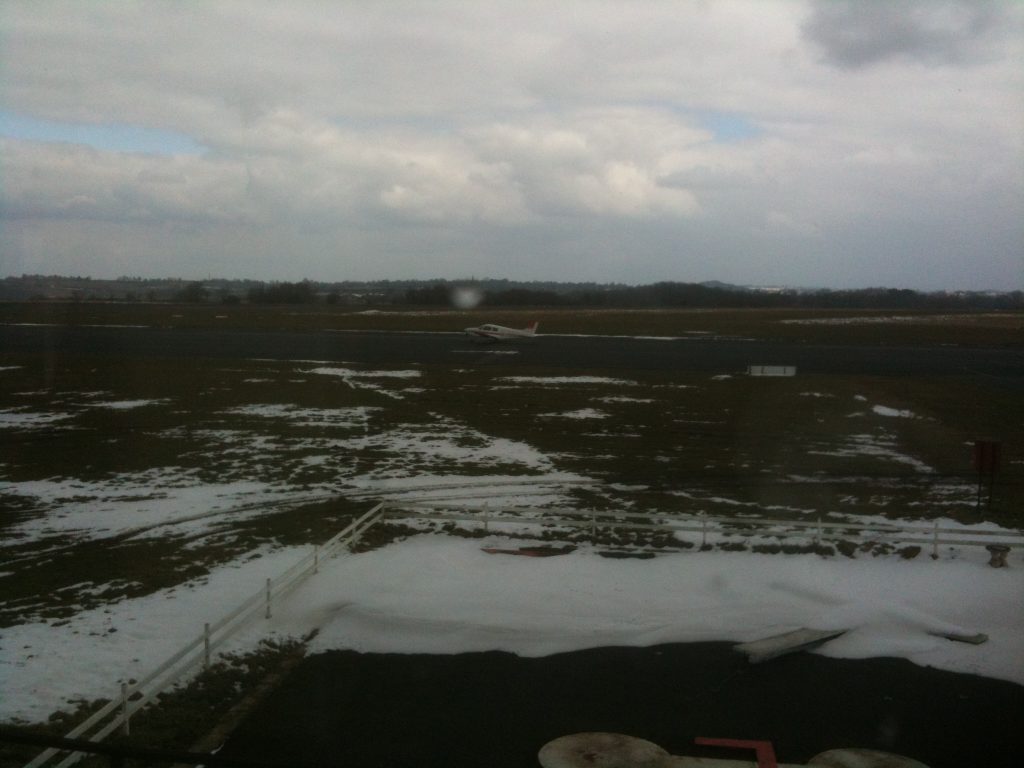 The cafe upstairs was well laid out, had great views of the runways and good selection of food. There’s a large pile of aviation magazines, and I pored through a couple while waiting. The airfield itself was a hive of activity, with a couple of helicopters, 3-axis microlights and PA28 training aircraft all taking to the air. The landing fee is very reasonable, and halved if you buy fuel (only at weekends/Bank Holidays though).

After a convivial lunch, we headed off and my departure and return flight were pretty uneventful. There weren’t many talking on the radio, and I sometimes wondered if I had selected the right frequency.  Coventry Approach and then Brize Radar provided a Basic service until in sight of Kemble. 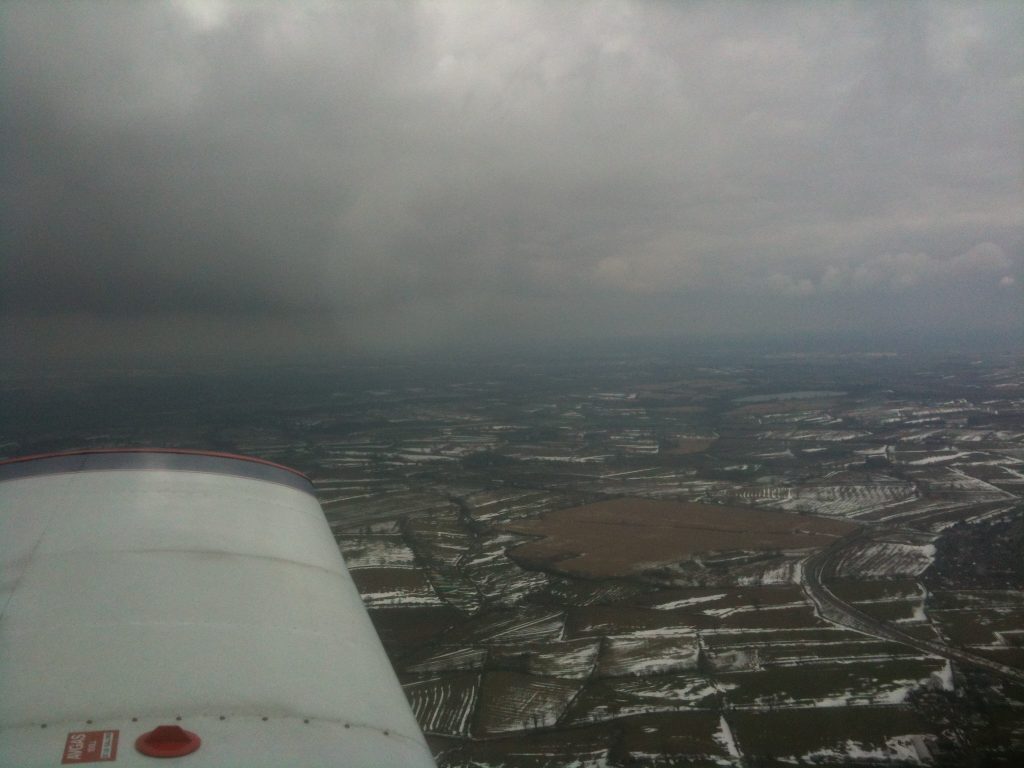 I had arranged with other club members that whoever returned last would arrange for refuelling from the bowser, so was able to avoid a (potentially costly) detour to the pumps. Putting the aircraft cover on was tricky in the strengthening wind. After a quick chat in the clubhouse, completing the paperwork, it was off home after a satisfying day out.