Bolt Head is a private airstrip close to Salcombe on the south coast. This 620 metre grass strip has been a long time ambition of mine to visit, and with the weather forecast promising sunshine on the May Bank Holiday, it seemed an ideal opportunity.

I had called a few days before and spoke to one of the two resident pilots who now manage the airstrip on behalf of the owners (who own the land and the adjacent campsite). Their website shows some great photos of the strip and detailed pilot instructions. Noise abatement is important, so a glide approach is recommended. PPR is mandatory.

My passengers were to be my daughter and a couple of her college friends. I’d be flying a Warrior rather than the Arrow. Andy had booked the Arrow for a family flight, but in any case a Warrior is more suitable for a shorter grass strip. I had carefully run through the Weight and Balance calculations, as well as the landing distance/take-off runway required several times. I spoke to an instructor just to confirm that 4 up from a grass strip of 620 metres was sensible (rather than marginal). Another club member had wanted to fly the aircraft earlier in the day, and we agreed to defer my slot until 11am to fit both our plans in. The aircraft was refulled back up to tabs, so enough for 4 hours flight. Just right for 1:30 each way and 1 hour reserve.

After departure, we headed off towards Bristol, passing clear of the Badminton Horse Trials, although we could see just how large an event it is. As I approached Bristol, I asked the controller for a transit through the middle of their zone – he allocated a squawk and advised me to expect a clearance. I then asked if I could make a couple of quick orbits at Mangotsfield (above my passenger’s houses) and was asked to report when complete. Perhaps I should have included that in the first request, but I thought that might make it a bit long.

My passengers identified roughly where they lived, and we made a couple of steep turns at about 1500 feet which they enjoyed. My daughter now associates the term “orbit” with a 60 degree steep turn, something I wouldn’t have done with my wife onboard. We were then cleared straight through the zone at 2000 feet and passed to the tower shortly before reaching the main airport itself for clearance through the overhead – we saw a Ryanair land a few minutes beforehand. Once clear of the airport, we were passed back to Radar again and continued on towards Cheddar uneventfully.

Somerset and Dorset… into the fog

Thereafter, we routed through familiar landmarks of Bridgewater and Taunton before heading directly south towards the coast. I gave my passenger control and he held straight and level pretty well, managing to keep our heading and make a few simple turns easily. We tuned into Dunkeswell radio and heard them announce parachute dropping in progress. This was where we came across the coastal fog, which stretched for several miles in both directions. At first, it looked as though it was unlikely we’d be able to land at Salcombe, although there was some hopeful signs of better weather in that direction. I had seen the fog reported in earlier METARs before we set off, but expected it to have cleared by now. Dunkeswell was clear, active and our alternate.

We routed slightly more inland than I had originally planned to ensure we were within gliding range of visible fields, but it was still strange to view the top of some masts sticking up above the thick cloud layer below us as we flew at around 2,500 feet near Berry Head.

Cleared for a (self-announced) landing

As we got closer to Salcombe, it became apparent that Bolt Head was well clear of fog and I remained high as we approached from the West. Expecting to be landing on 29, I self-announced on SafetyCom frequency and looked for confirmation of the wind from the windsock. We figured out that the wind was heading straight down runway 11, so changed our plans (and circuit direction) to make a glide approach avoiding the buildings. There is an uphill slope at the beginning of the runway, so when combining that with a good approach and strong flare we landed gently. Perhaps the grass flattered my landing too, but we were well under control and stopped easily before the turnoff to parking half way down the strip.

It seemed quite busy there for such an out-of-the-way strip – perhaps half a dozen aircraft parked up. Chris, one of the local pilots and airfield managers, came and said hello, made us feel welcome and answered a few questions about where we could go.

Walking to the beach

We walked south east for about 5 minutes to reach East Soar Farm, which has converted a barn into a “Walker’s Hut”, serving tea/coffee/cake inside and outside, with spotless new toilets and play area. After re-fuelling with tea and cake, we headed off in the sunshine along the coastal path and then down towards the first of two beaches about 10-15 minutes later. There’s a regular 1/2 hour ferry service into the main town from here, which was quite interesting to watch – a tractor-like vehicle drives out from the beach with the passengers and docks with the ferry.

After the kids played Frisbee and paddled on the beach, another 10-15 minutes walk took us along to the next beach, smaller but with an attractive pub – the Winking Prawn.

It was then about a further 30 minutes walk to the main town itself, where we enjoyed traditional fish and chips. There are plenty of tourist shops, especially yacht/sailing type clothing. A new waterside apartment complex is being constructed – the whole area looks a popular place to retire to. 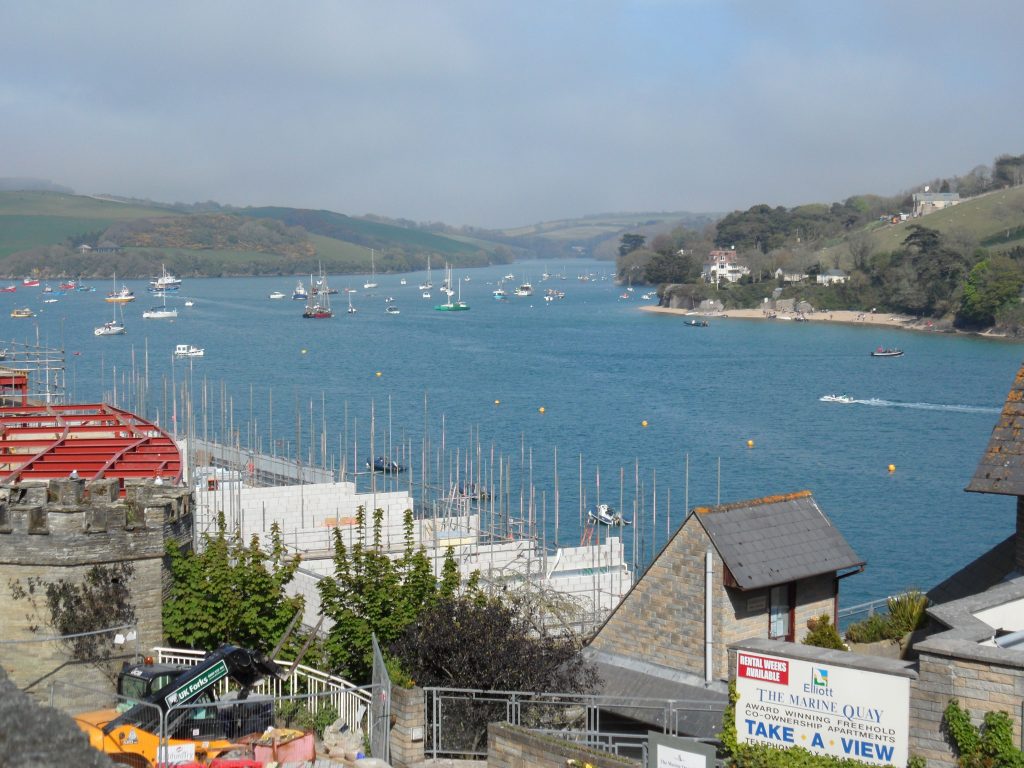 It probably took about 1:10 minutes to walk back from town to the airstrip. There was only one other aircraft there, and it started up and departed as I was pre-flighting. There was a slight wind from the East, so we again chose runway 11. Once all onboard, I made full use of the runway length and used two stages of flap for the standard short strip take-off. After powering up before releasing the brakes, it all seems very slow as we started rolling, with a slight uphill slope at the beginning. I’d warned the passengers earlier it would be a bit bumpy, so they weren’t surprised by that. At about half way, as we passed the windsock, we were over 45 knots and already almost airborne and I felt confident we’d make it. Then suddenly we were in the air and climbing.

The coastal fog was still present to the east, some areas wouldn’t have had any sight of the sun that day. We retraced our route, but this time kept to the west of the Bristol Zone. Traffic on the M5 below us looked to be busy and slow as you’d expect late on a Bank Holiday Monday – it would have taken twice as long to drive back. I asked for and was given a transit not above 2000 feet along the coast, and we got great views of the Severn estuary. It was then a routine path back to Kemble. With Bristol heard to be operating on runway 27, I had though Kemble would be on runway 26, so setup for a downwind join. Realising from the windsock that 08 was more favourable, I then tried somewhat late to change into a direct glide approach but ended up being too high for a stable approach and went around. Landing long, it was a short taxi back to parking where we refuelled and put the covers back. A crew of four made that short work, and we were soon on our way home.

Fabulous sunny day at the beach, great to be able to share the experience with some new passengers, and I hope to be able to repeat a similar trip in the summer again. It’s very much part of what  the training for PPL is all about.