Today Andy and I shared flights in the club Arrow from Kemble anticlockwise around London landing at Shoreham, Lashenden-Headcorn, Stapleford, Cranfield – all of which were new to me. A highlight of the day was a transit overhead Luton. Some of the new airfields were quite challenging, with up to five aircraft in the circuit at any time – not easy when you are unfamiliar with the landmarks and circuit pattern.

After the success of our South Wales flying day tour, we’d agreed to try a similar arrangement today. Apart from Lydd, we’ve not been to the South-East or East of London and a circumnavigation seemed a good option.

I took the first leg into Shoreham, having not been there before. This was fairly straightforward, routing almost direct via Popham and Petersfield. On first contact with Shoreham, we were asked to fly along the coast and report at the power station for a crosswind join for 04 left hand circuit. Perhaps ATC had thought we were arriving from the East – my initial call had just said 10 miles out – and I wasn’t familiar enough at that stage to realise that the power station was on the east side of the airport. A straightforward overhead join would have been more efficient.

So we took the longer detour and this allowed us time to get our bearings. There was plenty of activity with traffic arriving and departing, but we were easily slotted into the circuit and I think number 3 to land. We followed that track out to sea and back in, being warned on final about the railway track that runs perpendicular just before the threshold. I took a photo of that from the hold prior to departure. Perhaps I landed a little fast, and was told to exit at the far end and taxi to the apron for parking. Being new to the airfield, I didn’t quite catch which row to park up on, and had to ask again as we reached the apron.

Shoreham is a busy airport, just a few miles outside Brighton on the South Coast, with plenty of commercial training, full ATC, instrument approaches (NDB/DME) and maintenance. The art deco building housing the cafe could do with a new coat of paint, but inside the cafe looks recently refurbished and offered a good choice of fayre. It was busy with families and groups both inside and out, watching the hive of activity around it.

We paid our landing fee (not one of the cheaper GA airports, but it does support full ATC) and enjoyed some tea/coffee while sitting outside of the restaurant. One of the unusual features of this airport is that they display all aircraft arrivals and departures on a screen – common for commercial airports but I don’t think this is done anywhere else. Our flight from Kemble in G-AZWS was duly logged.

It was Andy’s turn next for what was a relatively short hop (less than 30 minutes) to Lashenden. Airports with double barrelled names always confuse me – why not use one name or another. The airport is really just Lashenden but is located next to the village of Headcorn. Since it is a major parachute base, they don’t allow overhead joins, so once it was identified (not that easy, which is probably why it has an NDB/DME), it was a simple downwind join and good landing. This is a grass strip but in good condition and more than long enough for our purposes.

The landing fee was very reasonable and we filled the tanks up to full, then ate lunch (bacon/egg bap) in the cafe. This was also a hive of activity, with regular parachute drops attracting both jumpers and their friends/family, but we were also treated to a formation display (I guess it was either training or practice) by four colourful aircraft. 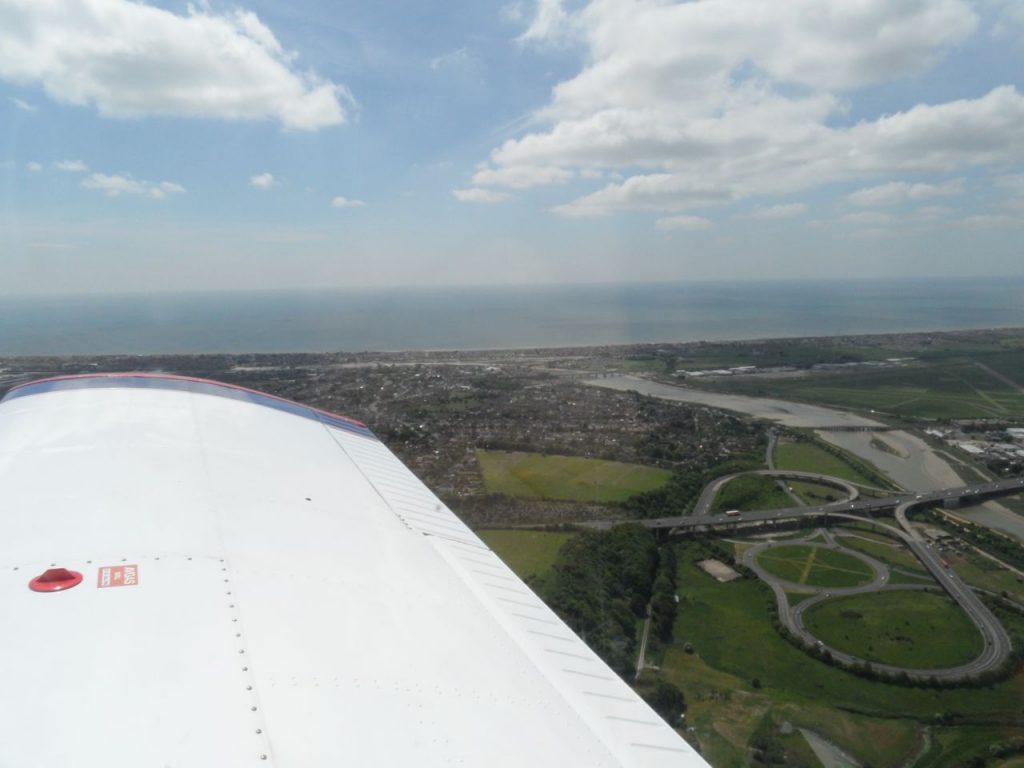 My turn again, and this time we had to be much more aware of controlled airspace above and to the west of us. Visibility was poor on this side of London, perhaps 5 miles at times in the haze. We took a Basic service from Farnborough East, having to switch boxes and climb to 2000 feet to make initial radio contact. Passing to the west of Rochester Airfield, we were only just able to identify it visually. We could just make out the skyscrapers of the City of London on our left and power stations on our right as we flew over the Thames and the docks.

As we switched over to Stapleford Radio, Farborough bade us farewell and cautioned against getting too close to London City controlled airspace which was only a couple of miles away. Being air/ground radio, Stapleford can’t give instructions to aircraft on the ground or in the air, however they were able to remind me that overhead joins are customary at weekend. I had printed out the circuit chart from their website in the morning, but even with that on hand, I needed Andy’s full attention to track up to four or five other aircraft in the circuit and work out exactly where to go. Having descended deadside and joined crosswind, my first circuit was too tight – I did avoid the villages but  the aircraft in front hadn’t vacated in time, so I went around. We heard and saw two aircraft ahead of us, and this made it easier to follow what is quite a wide circuit route delineated by the motorways. I slowed down and slightly extended the circuit, turning late on to final, which ensured there was enough spacing from the aircraft ahead.

There are twin runways on 04, one with an inset hard runway for about 600 meters. The all grass 04L was in use. Grass flatters landings and this one was perhaps a little fast. We vacated to the 04 Right runway and used this as a taxiway, following another aircraft. It held before crossing the runway to the parking area, waiting for the two behind us to land and go-around (one did each). We parked in the open grass area opposite the radio control room and walked in to reception to pay our landing fees.

I’d expected this to be a hard runway instead of grass, being another popular commercial flying training base and busy airport. The grass is kept in good condition and is long enough for most popular GA types. The cafe looked like it had been refurbished recently and we settled down with another hot drink to plan the next steps. Several instructors were breifing/de-breifing their students in the pleasant surroundings there, while some customers sat outside watching the stream of activity.

It was Andy’s turn for the last leg home. We were running ahead of our planned time, and so Andy decided he’d like to add another stop to our trip. Cranfield has a special offer of low landing fees at weekends and was only a few minutes out of our original route. A direct route meant passing through Luton airspace so we planned to ask for that, but if unsuccessful route outside via a couple of navaids.

Shortly after departure, we switched to Luton Approach and made contact. After being told to standby, we heard a long stream of instructions to commercial air traffic and thought it unlikely we’d get our transit. But after a couple of minutes, we were asked to “pass our message”, received a squawk, were identified and almost immediately our transit was approved at not above 2000 feet.

Entering the zone, we were given a Radar Control Service and later instructed to fly over the runway threshold. The distinctive orange EasyJet buildings stood out.

Cranfield is normally a very busy training airport, equipped with a wide range of instrument approaches. It hosts a university and several commercial training outfits, although perhaps is not as busy as it was in its heyday. After landing, we parked up and visited the tower to pay our landing fees (one of the lowest of the day), and walked around to the cafe for yet another hot drink. We asked if it was normally this quiet and were told that everybody had gone off to the major Aero exibition at Sywell this weekend. Nonetheless, it seems like a good option for instrument practice and using full ATC services with their low price at the weekend.

Andy’s turn again for the last leg back to Kemble. We wanted to route directly through the Brize Zone, but thought the simplest way was to climb up to 4000 feet and pass above it. We did get a Basic Service from Brize which terminated at 5pm just as we crossed through their overhead. We then flew overhead Fairford and back to base.

Landing back at Kemble just after hours, we heard the AFIS announce the runway and QFE to other traffic – providing a helpful A/G  service shortly after they had officially closed.

Debriefing with a cold beer after sorting out the paperwork, we agreed we’d enjoyed an excellent day’s flying and packed a lot in. Three new airports in the logbook each and a different part of the country, with a variety of types and styles of airport/airfield and the bonus of a transit through Luton airspace. Sharing the flight meant this was only 1:30 flight time for me, making it much more cost effective than if solo, plus the benefit of another pilot helping out when there was a lot to do.

Next time, I should spend even more time reviewing the circuit patterns at new airfields. Despite having printed them out, I could have done this better with more preparation. Flying with another PPL alongside helped deal with busy situations, such as when there were five aircraft sharing the same unfamiliar circuit.

All in all, a very enjoyable day. Read Andy’s perspective about the day on his blog.