Some minor changes since last year

I had a really great time flying in Dallas last year and found myself again in the same place on business, so took the opportunity to fly while I was there. Pleased with the outfit I used before, I returned to Slipstream Aviation at Dallas Executive – they have the same aircraft (three Grumman AA5A Cheetahs) – although there’s been a bit of turnover since last year in the instructors as is often the case with flight schools. Airport security has been tightened a little bit too, with the main access gate moved so you don’t have to drive on to the apron to get to the FBO. A key-coded gate is now in place for pedestrian access to the apron from the restaurant. Other than that, it seemed quite familiar.

I had asked for an hour’s instruction and informal check-out with a view to making a solo flight. My records were still on file from last year which sped up the process. Juan talked through what we might do first, and thought some general handling would be a good idea followed by soft field and short field landing practice. He was keen for me to try out the “falling leaf” manouevre that I’d been shown there the previous year. We didn’t spend much time revisiting air law or the differences between US and European regulations.

The AA5 aircraft is an older model, but well equipped. The Garmin 430 GPS capable of LPV approaches drives an EHSI which is self-aligning, avoiding the need for constant compass checks. There’s a fuel meter and engine performance monitor. A new vacuum pump had just been fitted as shown in the defect log. All US training aircraft need to be fitted with an ELT (emergency location transmitter) but there was no sign of the ADF commonly found in the UK. This level of equipment was more than adequate for IFR flight, and Juan demonstrated how easy it was to lookup and route directly to a nearby airport, and to load the frequencies to be used.

Short and snappy on the radio

The R/T procedures came back to me but still seemed pretty strange. You keep it very short and succinct, avoiding the pleasantries. After listening to the ATIS, we called ground for taxi instructions, then silently switched to tower when ready for departure. After take-off, we didn’t sign off with the tower but just left their frequency. We headed towards Dallas South, an unmanned grass strip about 10 miles south, but first practiced some general handling. Juan was pleased with my steep turns, and then moved on to various stalls both power off and on, including a 360 turn with the stall horn blaring throughout.

We tried the falling leaf maneouvre several times, where you don’t move the ailerons at all but recover from a dipping wing by using only the top rudder. To avoid the temptation to use the yoke, Juan held it for me the first time and left me control only through the rudder. My first attempt was pretty ropey, as we swung wildly from side to side. My second was better, and by the third I was getting the hang of it. Anticipation is key. I could see that this helped improve my overall aircraft handling by understanding the performance at the edge of the flight envelope. 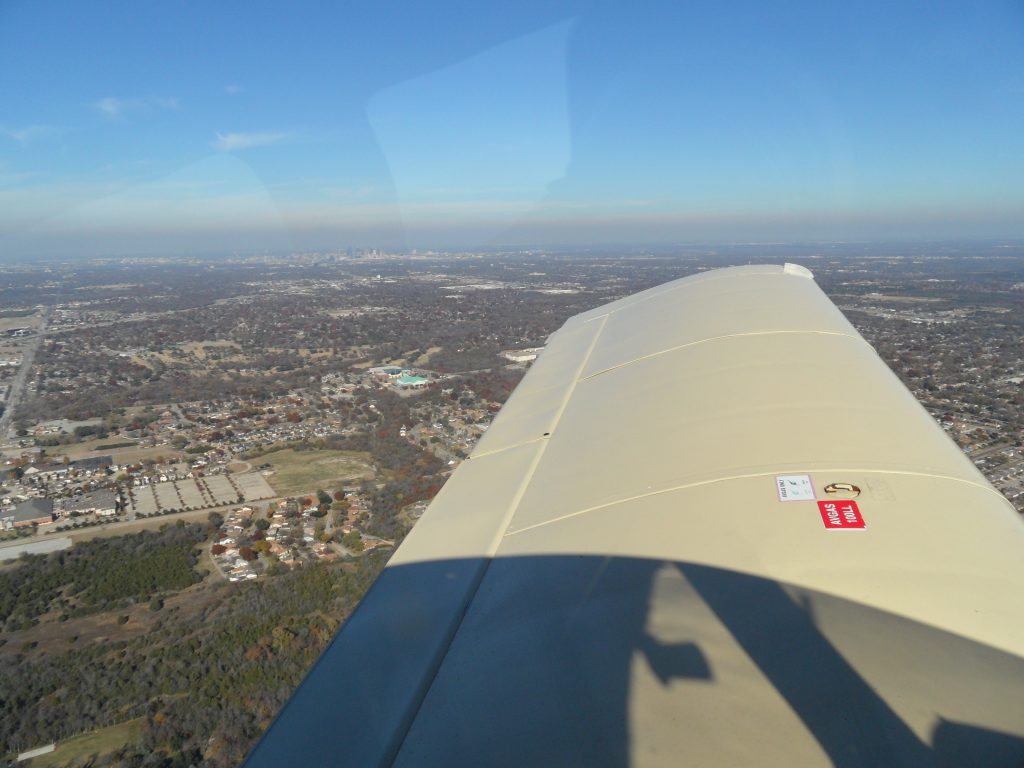 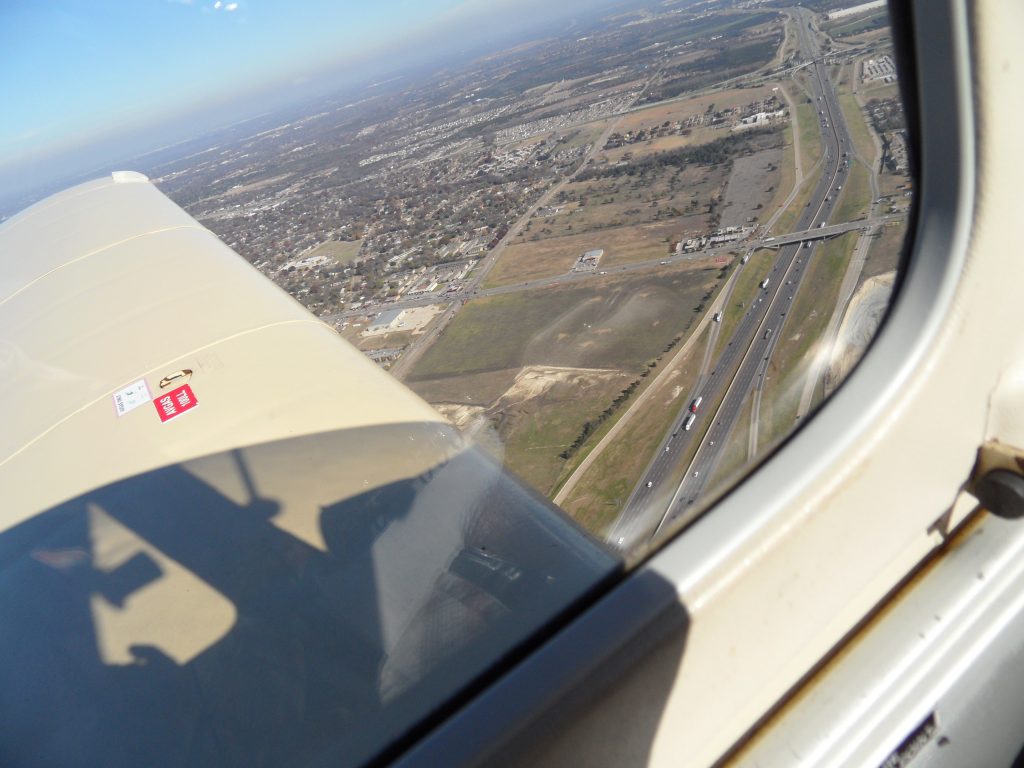 We self-announced and landed a few times at Dallas South, which we had all to ourselves. The grass was pretty rough and pot-holed, needing some good technique to avoid digging in and bending the prop. This was mostly about keeping the nosewheel up and having it off the ground as early (on take-off) and late (on landing) as possible. I needed some encouragement to pull really hard back on the yoke, but got the hang of it in the end. Once airborne, it was important to get the nose down again and allow the speed to build up before climbing away.

One the way back, we dropped in for a touch and go at Lancaster, all self-announced. There would be no landing fees due at either airport, as is the case almost everywhere in the US. We did a few circuits when back at Executive – the controller cleared us to land and told us we were cleared for any future circuits on the same runway, so we didn’t need to talk to him again until we landed for the last time. It all seemed very sensible and straightforward.

Juan had me lose height and speed by slipping hard, almost down to the flare. He demonstrated the technique for one circuit and I repeated that a couple of times. We also flew cross controlled above and along the runway – one way to lose excess speed before touching down – but very cautious not to land faster than 80 knots or when not aligned on track. It’s certainly one way of practicing for cross wind landings. I also managed to do a touch-and go wheelie, touching down only the main wheels and not the nosewheel.

After returning to base for a quick debrief, Juan suggested a couple of places to the north east where I could go on my own, flying solo around the lakes in that area.

Solo flight around the lakes

After lunch at the excellent on-site airport restaurant, Delta Charlies (although perhaps not quite convinced about their claim to be the ideal romantic dinner date venue shown in their promotional video), I headed off to the east. I wanted to keep well clear of the Class Bravo airspace to the north of Executive which protects the larger Dallas Fort Worth and Dallas Love Field airports.

The landscape is very flat around here, with the few city centre skyscrapers sticking out prominently and easily spotted from afar. The scenery was unusual because you don’t expect to see so much water (in the lakes) in central Texas. I listened in on the various CTAF frequencies and heard other aircraft self announcing and self-co-ordinating their activities. A sharp lookout was essential, with several aircraft spotted. I didn’t ask for a Flight Following service for what would be just a short flight in the local area. Navigation was mainly using SkyDemon (which includes full coverage of the US) although I also planned the route with ForeFlight (a similar US app for the iPad). Both have strengths in different aspects.

After reaching the north-most end of the lakes to the east of Dallas, I turned  south and landed at Rockwell (F46). The power cables on the north end of the airfield seemed visually pretty high and close in, and I made a steeper approach than normal, landing further down the runway. The airfield details indicate a 4:1 glidepath, with 8:1 to clear the power lines which are slightly offset and a 500 feet displaced threshold. But with 1000 metres of runway, there’s still plenty enough left for an AA5 to land. I popped into the FBO (Fixed Base Operator office), where there were computers to plan flights, comfy chairs and a vending machine for drinks. Fuel was available on request. Another aircraft was just departing, but other than that I didn’t speak to anyone. 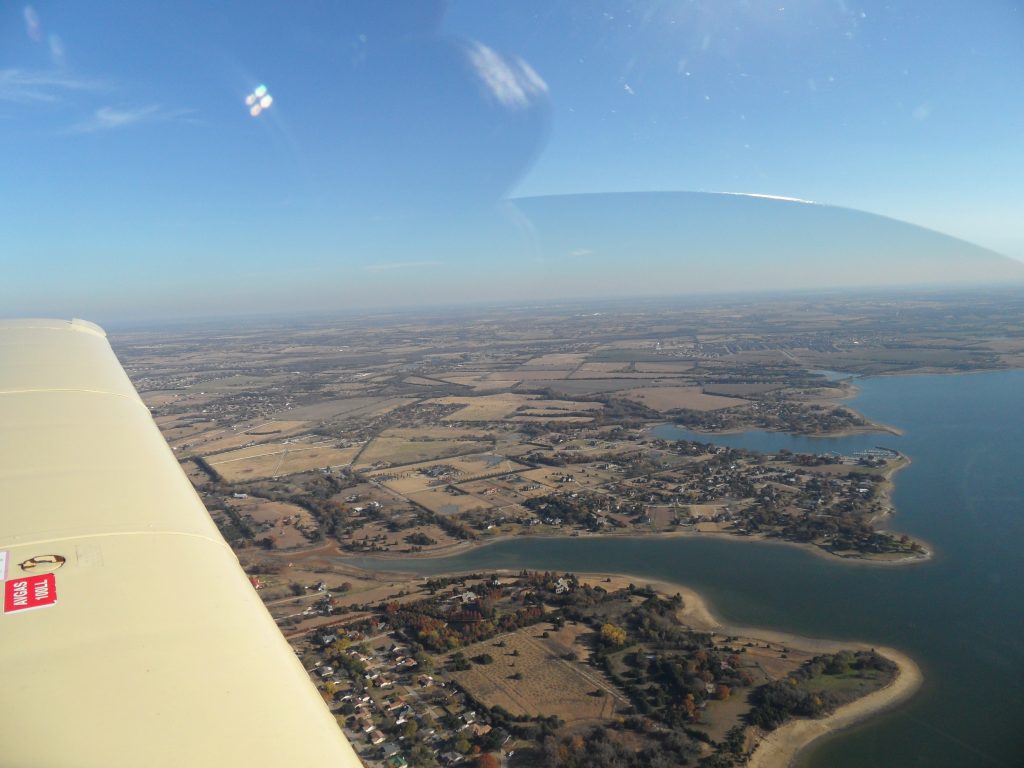 Lifting off again, all self-announced, I headed west and landed at a slightly larger city airport at Mesquite. There just seemed to be one employee on-site, who offered me fuel and pointed me towards the (free) coffee pot. The facilities and large runway were available to all residents of the city, and apart from the initial captial investment, looked to be run very cost effectively. The fuel price of $4.30/gallon (about 70p/litre) is very attractive compared to Europe. Naturally, both this and the previous airport had GPS instrument approaches for both runway directions. 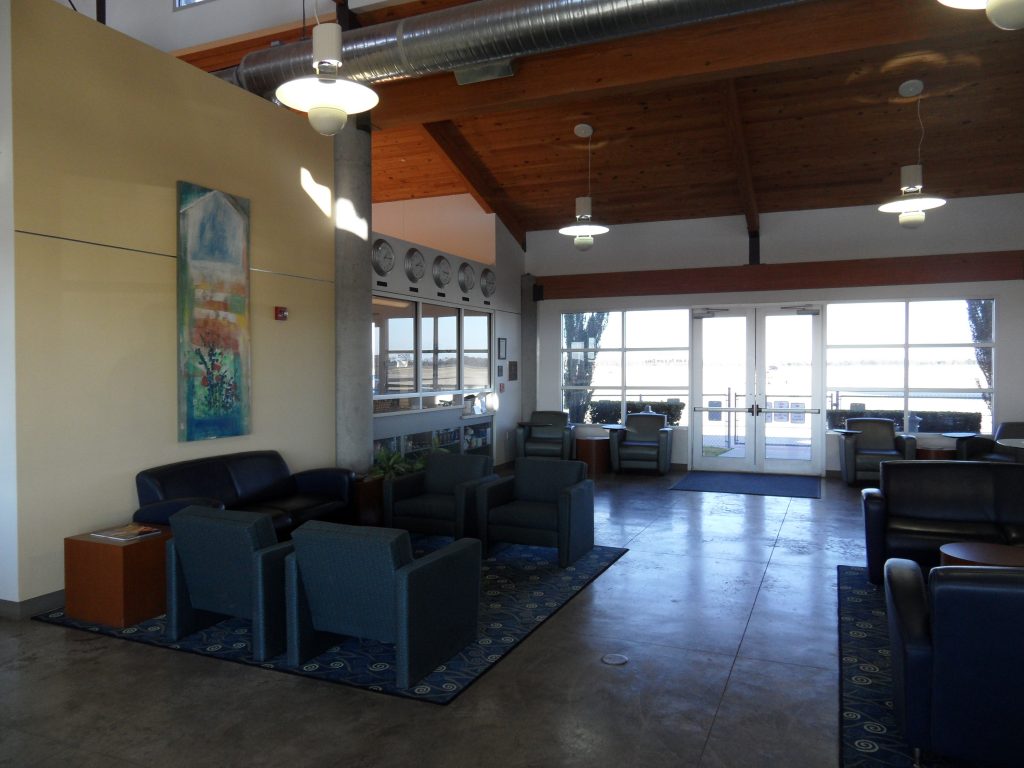 The return flight to Dallas Executive tracked closer in towards the city centre, turning away from the Bravo airspace at a couple of miles from the boundary, giving me quite a closer up view of the city centre area. The inbound radio call to Executive Tower immediately gave me instructions to report at 2 miles positioned for a left base. My R/T “muscle memory” started responding with my UK aircraft callsign from habit  (Golf…) before quickly correcting myself to Cheetah 92 Uniform. I heard (and saw) another aircraft cleared to land ahead of me and while it was still on final, I was told I was cleared to land #2. Perhaps I was a little fast on approach because I seemed to float for quite a long way before gently touching down.

I filled in the logbook in the aircraft and was emailed a receipt the following day.

A very enjoyable re-introduction into flying in the US combined with a worthwhile aircraft handling session. I was pleased how quickly I re-acquainted myself with the local procedures and R/T calls. The controllers were very helpful and efficient. Self-announcements at uncontrolled fields required close attention but appear to work very effectively. The whole setup for GA here is quite different from Europe, making it much a much more accessible and practical form of transport.

Plenty left to do if I could return again – Texas has some 396 airports with hard runways, and at least another 800 or so grass ones. Few have any landing fees. But many are deserted and functional, without the club atmosphere of a UK flying club. I’ll need to find out if there are some more lively places (or even fly-ins) to go to next time.

There’s a bit of administrative hassle coming up next year if I am to keep the status quo. I believe I’ll have to upgrade my JAR licence to an EASA one before April 2014 in order to retain IMC (which become IR(R)) privileges to fly in cloud and perform instrument approaches in the UK. Since EASA licence numbers differ in format from my current JAR one, this renders my FAA “piggyback” licence invalid. Re-issuing would normally require a visit to a US FSDO office in the US which are closed at weekends. Alternatively, the CAA has announced a re-issuing method which requires a personal visit to their office in Gatwick during working hours. Slightly easier to arrange perhaps but still quite awkward and an unnecessary expense.