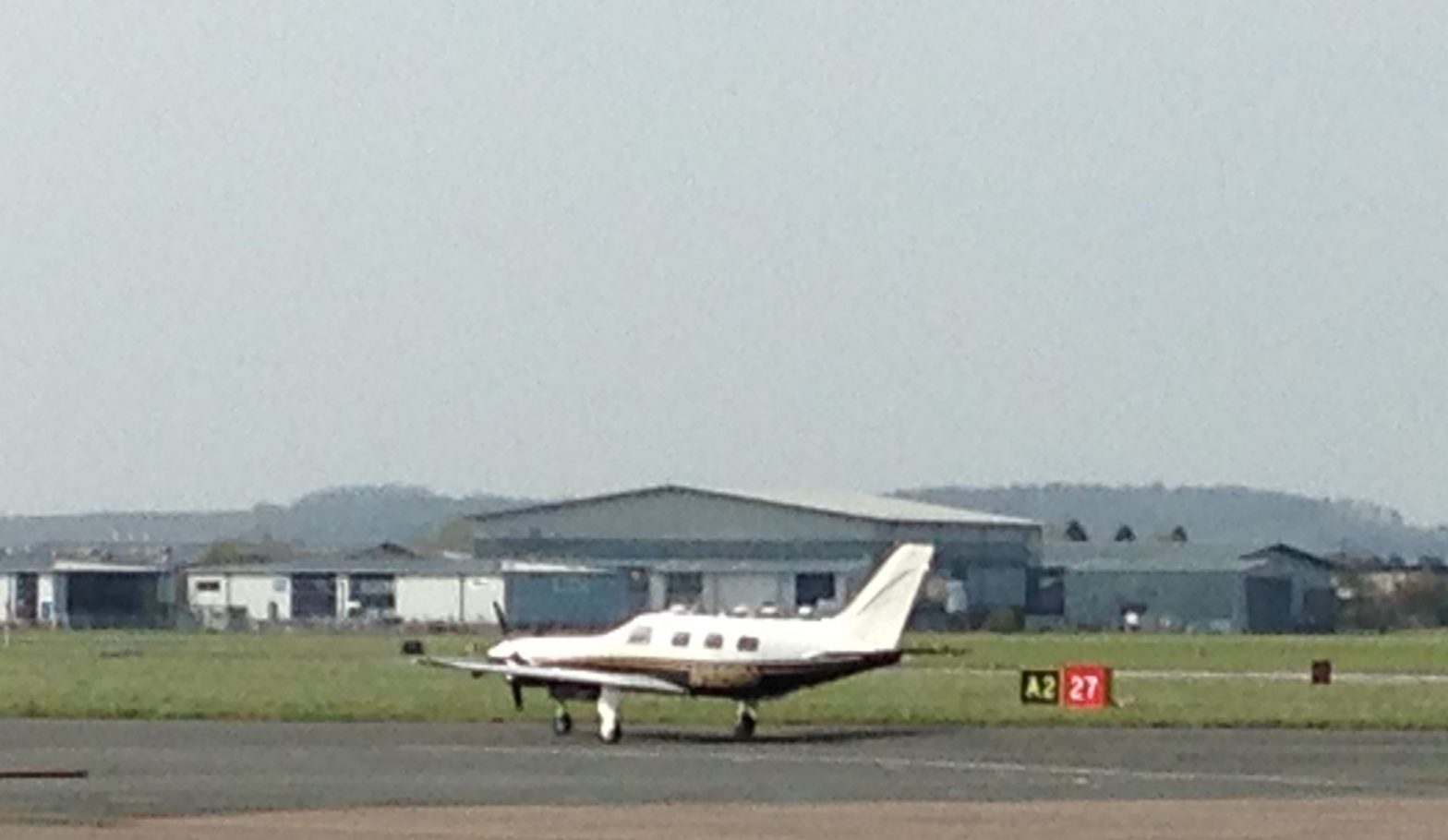 When someone asked if I’d like a short local flight in a Piper PA46T JetProp, it didn’t take long to say yes. Paul owned a share in an N-Reg and would be visiting Gloucester for a meeting, offering to take us up and find out what it was like.

I was joined by a couple of other friends who happened to be in Gloucester that day (getting their own aircraft seen to), but was given the right hand seat. It’s a six seater and has a drawbridge type door entry directly into the spacious passenger compartment. Paul demonstrated how to open and close the door so that we could make a quick exit on our return, allowing him to depart quickly. It’s important to take up the slack in the “drawbridge pulley cord” before dropping the door down, so that it can be lowered in a controlled fashion.

Although the rear passenger compartment is very spacious, it’s a surprising squeeze to get up front into the crew seats, and from there it didn’t look that much different in overall layout to any other single prop aircraft. There’s quite a few buttons and knobs, and a series of glass panel displays that all look extremely modern. The range of information available on the glass panels was impressive. The aircraft is pressurised but I noted that oxygen masks were stored behind the seats, both for use above 10,000 feet.

Winding up the engine

The startup procedure is quite a bit different – the starter motor revolves the prop slowly a few times while the jet engine powers up and takes over.  Paul ran through the checklist which took a similar amount of time to a normal startup, but had quite a few unfamiliar aspects. There’s no need for any power checks at the hold as with smaller prop engines.

It runs on much cheaper Jet A1 fuel rather than 100LL. Sharing the same fuel as commercial aircraft means that it’s available at virtually every commercial airport worldwide. This isn’t the kind of aircraft suitable for short grass strips which would only have AVGAS.

Jet engines like this are incredibly reliable and I’d prefer a single JetProp compared to a twin prop any day. Maintenance costs can be significant but the lifetime of a Jet engine is longer. While our Lycoming IO-540 would normally have to be overhauled after 2000 flying hours, the JetProp is 3600 or 5 years but many continue beyond 5000 hours “on condition”.

Taxiing doesn’t normally need the brakes – the 4 blade prop can be “put in reverse” to give some braking action, by lifting the throttle above a gate and pulling back. We taxied around the airfield to the 09 hold and before long were lined up. We waited briefly while a Tiger Moth took off on the grass 04 across us. Paul described how it had taken him a while to get used to the substantial thrust of the engine on the take-off roll. With some 576 horsepower generating a lot of P-Factor, it really needed a firm right boot on the rudder to keep it straight. We seemed to be over 100 knots before the end of the runway and climbing quickly at about 120 knots before turning left and heading north.

The traffic warning system was cautioning with several audio alerts (“Traffic, Traffic”), which also showed on the real-time moving map display. This made it easy to pick out a couple of nearby aircraft that we could easily have missed – one doing spins and another passing below. Within a short time we were up at FL50 and cruising nicely at 150 knots – not radically faster than our TB20 but easily capable of over 300 knots. Despite the speed, it all seemed very comfortable, smooth and uneventful.

Paul let me take the controls and I made a few gentle turns – it seemed pretty docile and easy to fly in that configuration. The yoke is very compact and responsive. I got caught out by trying to follow a course on the P2 DI which doesn’t self-align with the compass, but that was easily sorted before I headed too far off track.

Before long it was time to return to Gloucester. Paul asked ATC for an RNAV approach, but on this nice sunny Saturday afternoon we were told we would have to wait at least 30 minutes. So I flew a standard overhead join and we slowed down to fit in with other circuit traffic. I could see it might be slightly turbulent on final approach so was quite happy to return control to Paul after we turned final.

The landing procedure wasn’t that much different from any other single engine aircraft, with Paul pulling back on the yoke for a gentle touch down and taxi to parking. We quickly disembarked and watched him depart smoothly again.

Thanks for a great flight Paul!

This photo taken at Bournemouth shows just how long the engine compartment is.

There’s also a good YouTube video of a longer first flight in the aircraft, visiting AeroExpo Friedrischafen which also shows the startup procedure. They sustained a puncture while taxi-ing to the hold and the ground staff sorted out the blown tyre in a couple of hours without any consequential damage.

The leading article in this edition of PPL/IR magazine documents the reasoning behind and the process that Paul’s group went through during the selection and purchase of the aircraft.