Today’s flights originated with a request from my daughter at University, who asked me to take her flying for the day. To the beach please. Then she mentioned she would be taking her new boyfriend along, and suggested I also bring a friend. So I asked my wife if she wanted to join us for a day at the beach and it became a “Meet the Parents” outing. This meant flying from Gloucester to Coventry in the TB20 to pickup our passengers, then on to Caernarfon for lunch and an afternoon on the beach. With an excellent weather forecast, there was little to do apart from make a couple of calls for PPR the day before. I also confirmed with Coventry ATC that I wouldn’t need to phone them on the day to book out prior to each departure, now that they had all our details.

It was a somewhat hazy/cloudy on the first flight. I routed just south of Wellesbourne, so spoke to them for a while before calling inbound to Coventry. I fluffed the R/T a bit, having realised only during the initial call that I should have listened to the ATIS first. They were very good about it and routed me via Warwick for a left base join onto 23.

Daughter and boyfriend were there on time to meet us. Quickly paid landing fee in the office and mounted up ready to go. Daughter had been concerned when explaining to the taxi driver that “Daddy is going to pick us up in his aeroplane to take us to the beach for the day” sounded somewhat pretentious!

There was a definite cloud layer and I chose to climb up to about 7000 feet to keep on top of it. We weaved around a few of the higher clouds and went through a couple with light turbulence. I was on a listening squawk with Birmingham, and heard our position being called out to other commercial traffic several times. 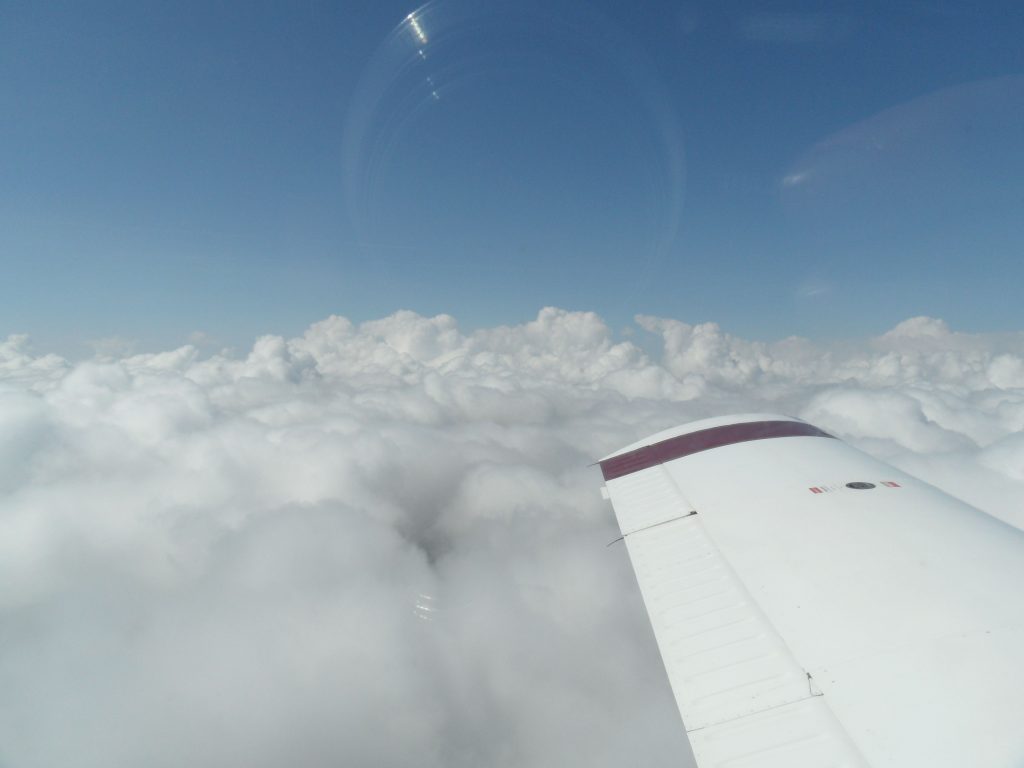 As we approached North Wales, the clouds thinned out and we started to make out the sea and the higher mountain peaks of Snowdonia. I spoke to London Information, then Valley Radar. I descended while orbiting through a gap in the clouds over the sea to the south west of Caernarfon – there was plenty of height to lose and I was dropping at over 1000 fpm at times. That’s the common limit for non-pressurised commercial passenger flights to avoid discomfort.  The high mountains are so close to the coast that you can’t really get down much earlier, and there’s a tall mast on the Llewyn peninsula that you definitely want to avoid.

I made a standard overhead join, but underestimated the crosswind from the north, making too tight a circuit and having to recover onto final. Although the photo below looked like it was OK, we were fast and I wasn’t entirely happy so went around. We followed another school aircraft making a wide circuit and landed without fuss on my second attempt. None of my passengers seemed concerned or put out.

After lunch at the airport cafe, we walked the short distance to the beach. It was a little windy but we’d brought a windbreak and snoozed lazily in the sun while the others played frisbee and paddled in the sea.

I got a text from fellow pilot Andy asking if I’d managed to fly today, and could sense more than a little envy as he continued to work hard in his office while I was on the beach.

I learnt that the construction project at the airfield is a new hangar for the forthcoming civilian air-sea rescue helicopter. The RAF used to perform that role with Sea King’s based at Valley nearby, but this function moves to the Coastguard from next April and has been contracted out to Bristow Helicopters who already do this in Scotland. I understand the RAF will maintain its own SAR function for military personnel only.

After a quick transit check, we all piled in for the return leg. At this point the local air ambulance helicopter flew past to land, churning up the freshly mown grass. It was raining green for a while after that, so it was just as well the doors were shut. During our stay, the wind had veered and strengthened, with runway 04 was now in use. This has a couple of huge wind turbines just to the side at the middle of the runway – somewhat daunting but didn’t affect our flightpath.

We flew at low level up the Menai Straights then turned south east again. The heat of the day meant some turbulence at the relatively low level over the hills, so I climbed up to about 4000 feet or so, wanting to stay in sight of the ground to make it more interesting. After passing Welshpool, I gave our new passenger control and we “reached for the sky” as he pulled back on the yoke a bit more than required. After a few minutes, he got the hang of it and was able to keep a straight and level course. Not bad for a first attempt.

Coventry Radar ensured descended in good time to keep clear of controlled airspace, routing us south of Leamington and then directly onto a downwind join for 23.

We landed just after office hours at Coventry although the airport itself remains open until past midnight. Fuelling was efficiently handled by ground staff who took payment details, and I sorted out the landing fee later when the office opened again on Monday – they offer a discount of 50% for refuelling stops such as this. Our passengers were able to exit quickly and we were back in the air within about 20 minutes of landing.

We heard and spotted little other traffic during our short hop back to Gloucester which routed around and close to a couple of gliding sites as well as Wellesbourne Airport. Gloucester was a little more active, with someone practicing on the NDB approach but they managed to slot us in for a right base join onto 27 without any difficulty.

I was getting a little tired after putting the plane to bed, so was glad that my wife was doing the driving today – it was only about 3 hours airbourne flying time in good weather conditions, but we’d fitted a lot into the day after a busy week at work.

Definitely a day to remember!