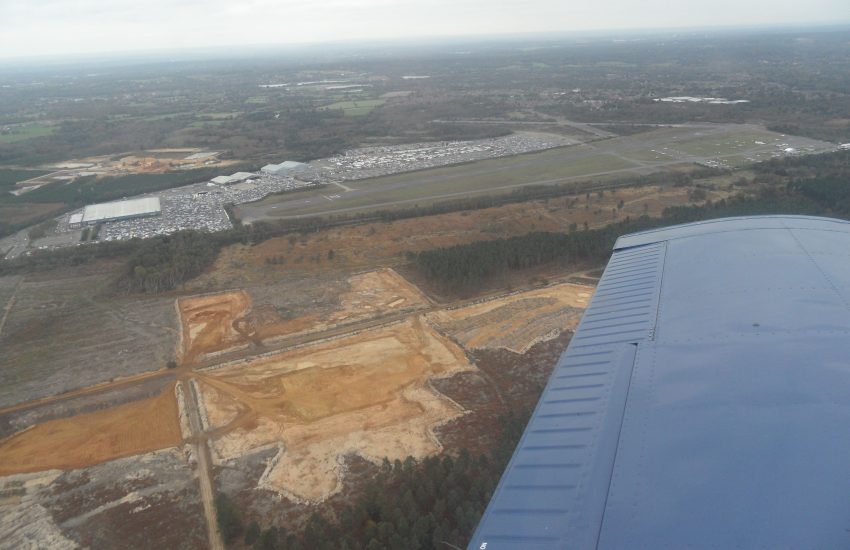 Since mid July when our shared TB20 was grounded for an engine rebuild, I’ve enjoyed a several flights as P1 in a PA28 from Freedom Aviation at Kemble and an opportunity during a business trip around Las Vegas. Andy has also been good enough to take me along for a flight in Freedom’s Citabria and a round trip to Leicester and Tatenhill in their PA28. I’ve also been fortunate enough to tag along as passenger with Bristol Aero Club to the LAA rally at Sywell and to Bournemouth’s open day as well as join in a couple of social evening meals, meeting a few disabled private pilots including one who’s currently learning. That’s involved getting to know the members and their new CFI a little better and I was pleased to be allowed to join in as P1 for one of the legs of today’s flyout.

At first glance, the process seems very informal. The date is set and aircraft booked well in advance, but the destination remains unknown until almost the day itself. Free landing vouchers are definitely a factor in the decision. Two routes were proposed via Turweston – a north option returning via Tatenhill and a southern one landing at Blackbushe first. On the day, the southern route was chosen on the basis of better weather and we all planned for that. I was able to use the new “Land Here” feature of SkyDemon for the first time – it’s designed for multi-hop routes just like today’s. With remarkably few NOTAMs and stable weather forecast, the day looked promising and devoid of surprises.

There were five aircraft involved – two club owned PA28s and two new PS28 Sport Cruisers which the club recently arranged to lease and operate. The CFI would also join us later at Tatenhill in his shared Bulldog, which had been booked by another owner for that morning. Everyone took their turn at flying a leg except one disabled trainee PPL who came along for the ride. Several tried out the new PS28s. Weight and balance were a factor in choosing who was assigned to which aircraft.

The club PA28s are perhaps a little tired inside but everything worked. G-BASJ has a 180hp engine and a Garmin 430. Members mostly know each other very well and some have been flying quite some time (at least one got his PPL before I was born). Alan flew the first leg which was very straightforward, almost a direct line from Kemble to Blackbushe. The cloudbase drove us below our initial 3000 feet cruising altitude, keeping VFR and a good lookout. There was quite a strong wind on landing, around 25 knots, pretty much straight down the runway. He made a very smooth touchdown without needing full flap.

We enjoyed coffee and cakes in the cafe once everyone had turned up.

My turn next and I was glad to have some experienced pilots onboard. On take-off, we came fairly close to some birds at 200-300 feet. I think my passengers might have preferred me to take more radical avoiding action, but I don’t like to do that at such low height. It’s also difficult to know which direction the bird might head off towards.

John tracked our route on the paper chart and setup waypoints for me on the 430, while we all looked out for VFR traffic. It was pretty busy in that sector at 2000 feet, and we saw quite a few other aircraft. We just used the listening squawk for Farnborough rather than requesting a Basic service as other club aircraft did. We had Mode S so the controllers could have talked to us by callsign if required.

BASJ has a wing leveller – an autopilot that with roll steering that copes with direction but not height. I tried this out and found it was a bit twitchy at first, much more sensitive than on the TB20. When trimmed properly, it worked quite well and I could see would be helpful on longer flights. You just have a keep a close watch on your altitude to avoid creeping up or down.

I’d been to Turweston before, on my very first landaway during my PPL training (and also my Qualifying Cross Country). I remembered the huge circuit pattern that takes you quite far north, and the relatively narrow runway that gives such a different picture from that at Kemble. The Pooley’s chartlet was quite easy to follow. The crosswind of about 10 knots was fine until I touched down slightly earlier than I wanted. I’d put it down to all that extra weight onboard 😉

A bowser drives out to refuel on request – just ensure you ask for UL91 first if that’s what you want – they have two. The cafe looks uninspiring from outside, but there was a range of cooked food indoors – bacon butties were particularly popular. Plans for the smart new clubhouse building were on display – it should open around October 2015.

The last leg was very interesting, being my first flight in an (almost) microlight. The PS28 Sportscruiser is made in Czech Republic. It’s a 2 seater Light Sport Aircraft (LSA) with a max takeoff weight of 600kg, powered by a Rotax engine that consumes 17 litres of Mogas/hour. The dashboard is very modern with Garmin moving map, electronic instruments and engine display. It was quite a contrast from the older PA28 and delight to fly in.

The owner isn’t a qualified instructor but was happy for members to join him in the right hand seat and take the controls during the cruise. It’s a stick rather than a yoke, fitted with electric trim buttons as well as the radio PTT.

I have taxied a castoring nosewheel aircraft before (the Grumman AA5 in Dallas), but it’s a knack that takes a little getting used to. Frequent gentle use of the brake was needed to keep the aircraft on track while I taxied on the grass to the hold and turned around.

The takeoff roll was very short (remember we did have quite a strong wind), but quite critical to keep on track before the airflow is enough for the rudder to take effect. With relatively low momentum, we were quickly at flying speed of 44 knots and lifted off. Accelerating to Vx of 65 knots we then climbed away quickly, although its more comfortable to “cruise climb” at something nearer 75. Cruising speed was around 85 knots and it took a little more concentration to maintain a constant altitude – I found I was drifting up and down by 100 feet or more without realising.

Again we found it was a busy day, and despite climbing to 3000 feet needed to keep a sharp lookout for other traffic. One aircraft caused us some concern because it wasn’t clear where it might go next, so we took a more divergent route. We obtained a Basic service from Brize, who weren’t worried about us overlying Little Rissington. We heard other club aircraft on frequency who were flying the same segment, mostly a little faster, and we arrived in the Kemble overhead as the other Sportscruiser announced itself.

I was very impressed by the glass cockpit but I know others who are more used to traditional six-pack round dials found it took some getting used to. I don’t think I’d need SkyDemon at all in the air – it even had built in geo-located airfield charts for use when taxiing. It is restricted to VFR only though, and the weight could be a limiting factor for others. Full fuel (about 100 litres) would give an endurance of well over 5 hours.

The approach seemed more like a glide to me, starting higher than I would have been used to with power almost off. The flaps are electric and you have to keep your finger on the button until they reach the required position. Approach speed should be in a fairly narrow band between 60 and 74 (max flap speed), which can be tricky in gusty conditions. Again the lower mass of the aircraft meant that the landing roll was relatively short and we easily departed at the first exit.

All 10 members plus CFI and instructors then decamped to the local pub for a thorough and sociable debrief. Overall, a very enjoyable day out. Nice to try out a new aircraft and share flights with other more experienced pilots.

It will be interesting to watch how much the PS28 are used. These seem a good next step for microlight pilots who want something a little bigger and like the modern/glass fit, which is exactly what the owner (who learnt on microlights himself) bought them for.