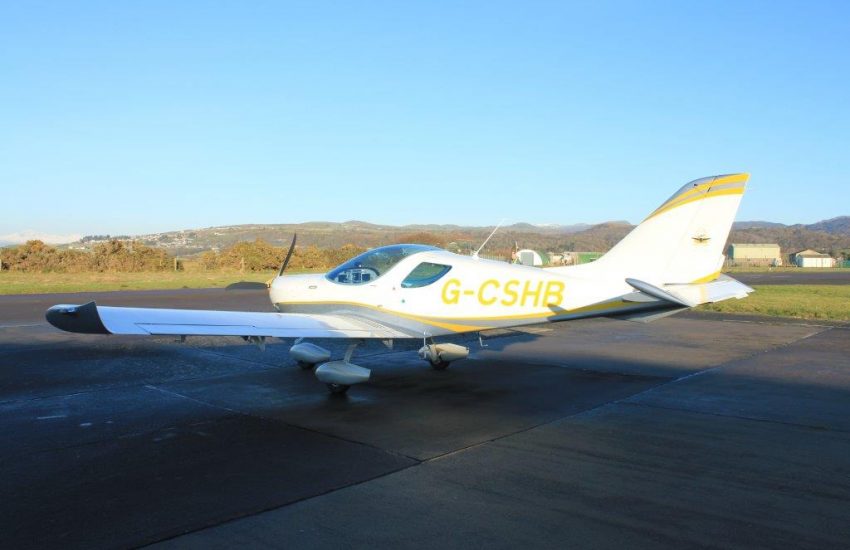 The Bristol Aero Club (based at Kemble EGBP) has both a couple of older PA28s and a couple of brand new two-seater PS28 Cruisers in their fleet. The UK distributor effectively lets club pilots solo hire the PS28s and there is plenty of availability. Differences training is required first.

I decided to give this a go after flying as a passenger during one leg of a club flyout. The aircraft struck me as being much more modern than the older club hacks, everything is shiny and new, there’s a glass cockpit with a couple of screens, the latest Mode S transponder, radio, electric flaps etc. Pitch and rudder trims use electric buttons on the joystick. One of the aircraft even has a ballistic parachute. They are a lot lighter and more affected by turbulence, have a slower cruising speed and a more limited total weight and/or range.

Before my first flight, Jens, the instructor, emailed me a bunch of stuff to read – the POH (Pilot Operating Handbook) and the manuals for the various avionics. The POH was a relatively quick read and I think you could get away with only learning the basics of the avionics if you wanted to – the default settings are pretty sensible.

The first thing that strikes you is just how light the aircraft is, designed for the American LSA (Light Sport Aircraft) class, although it is classed as a full CoA rather than microlight here in the UK. MTOW (Max Take Off Weight – i.e. including pilot, passenger, fuel, baggage) is 600kg…. about half that of a PA28. It weighs just 374kg empty. That means it’s very easy to move about and pull around with the towbar. It does make you wonder what these new SSDR (Single Seat Deregulated) aircraft like the e-GO with a max take-off weight of 300kg are going to be like.

One unusual point during the pre-flight was manually turning the prop through 5-6 full rotations to circulate the oil. There is a reassuring gurgle which you can’t miss when it’s done, a bit like a satisfying burp after drinking too much. Only after this point will the oil dipstick read correctly.

The Rotax engine sips fuel at about half the rate of the PA28, around 15-17 litres an hour, and is happy with MoGas (standard car petrol) as well as UL91 – it can also use AVGAS but prefers the unleaded alternatives. Other modern features include LED lights all round and glass cockpit displays. I can imagine that maintenance is much easier and parts longer lasting. The aircraft is cleared only for Day VFR flight and clearly placarded as such although I didn’t see any technical reason why it couldn’t be certified for night.

The engine start sequence for a Rotax doesn’t involve manual fuel pump priming. It’s more like a car engine from the 1970s where you pull out full choke (it was a cold day), set very little throttle, and turn the key. The engine springs into life and you slowly reduce the choke and let it warm up. The engine management system has plenty of red/yellow/green status indicators to tell you what’s happening. Revs are typically double or more than those of a PA28, idling at about 2500 rpm and full power for takeoff at 5500rpm (max 5 mins).

Taxiing takes a little time to get used to. The castoring nosewheel is very similar to the Grumman AA5 Cheetah that I flew in Texas, so some judicious braking is required to keep it on track. It can turn on a sixpence. Power checks aren’t particularly different, just the much higher revs of 4000 and the usual carb heat and mag tests.

With a stall speed of just 37 knots (31 with full flaps), it doesn’t take much to get this aircraft airborne. The higher power to weight ratio and low mass means it can accelerate to flying speed very quickly. It’s probably about 5 seconds but seems less between applying full power and becoming airborne. With first stage of flaps set, you apply full throttle, look down to check the speed, and find almost immediately you are ready to fly. Keeping the stick back to protect the nosewheel, the “Release” speed is 35 knots and take-off is 45. It’s very quick, but during the take-off roll there is little directional control from the rudder so you really need to be aware of that, especially in crosswind conditions.

Accelerate up to 60 in ground effect and then climb, which it does like a rocket. Flap limiting speed is 74, so you need to watch that carefully and retract them when above 500 feet.

Again the high revs for cruise are a surpise, around 4600-4800 giving about 80-90 knots. The all round view from the cockpit is tremendous. There is a curtain/shade to draw over the top of the cockpit roof to protect against too much sunshine.

The cockpit instrumentation is comprehensive, with digital tapes for speed and altitude, artificial horizon etc. You can push the “Value” knob to toggle between three main inputs – barometer setting, heading bug, target altitude – and then just turn to set. Separate standard radio and transponder will be familiar to almost every pilot. The GPS defaulted to a moving map display and you can zoom in with airfield plates/charts, although there’s no instrument approaches since it’s not IFR rated.

Being so much lighter, I found the general movement a little more lively (some might say bouncier) than a heavier aircraft. Steep turns seemed tighter and the aircraft is very responsive.

Jens had me perform a series of stalls in various configurations, plus recovery from a spiral dive. He also pulled the throttle a couple of times to check my PFLs.

I probably did about six landings in the circuit in total. General procedure is 80 knots downwind, 70 on base and 60 on final. First stage of flaps on base and full flaps on final. You really have to use attitude carefully (and quickly) on final to maintain the airspeed in the window between 60 and 74 (max flap limiting speed). With its low mass, the airspeed can drop off very quickly – useful for those short landings but something to be very wary of. The max demonstrated crosswind is 12 knots – I think it was around 10 knots on my second flight and this was really quite challenging enough. The full-on crosswind practice I’d had in December in between the two PS28 instruction flights also helped.

After the second flight was complete, Jens was happy to sign me off for solo flight. I’ll probably arrange to fly with another club pilot on a calm day, perhaps sharing a leg on a club flyout, for the first few times. I don’t think I’d opt to fly long distances with this when I have access to the much faster TB20, but it’s another choice for the shorter “hamburger runs” on a nice sunny day.

In addition to completing the differences training today, I also passed another minor milestone, reaching 400 hours total time. I don’t believe that qualifies or entitles me for anything in particular, just nice to see my experience continuing to evolve.