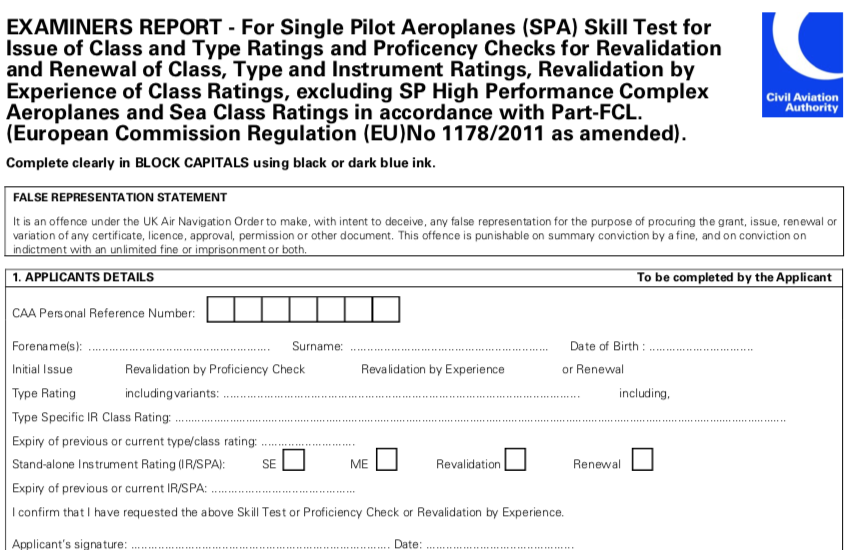 European private aviation requires lots of ongoing tests and checks to ensure pilots continue to be fit and capable of the tasks they are licenced for. All IR pilots must undergo an annual revalidation or lose their privileges. If you don’t do this before the year passes (specifically one year after the end of the month of the date you passed your initial IR skill test), then you must go to an ATO and be signed off as ready to take an IR renewal test. This inevitably would require at least one extra flight (to demonstrate you are up to standard) and probably more.

Hence most IR pilots try to ensure they’ve revalidated well before the deadline. You can do this as early as three months before expiry, which means most aim to take the renewal 9 months after passing the initial test, then every 12 months thereafter.

You can revalidate in an FNPT II simulator every other year, alternating annually with a check in an aircraft. Examiners require to be specially trained and signed off to conduct renewals on a simulator, so there are fewer to choose from. You can’t renew an expired IR in a sim either.

Often, pilots revalidate their IR(R) rating at the same time although this isn’t really needed. The IR(R) revalidation lasts for 25 months compared to 12 for the full IR. The test scope is pretty much the same, except that a low level bad weather circuit is also required for the IR(R).

By contrast, FAA IR pilots only need to remain current – they must be able to prove they’ve flown 6 IFR approaches within the last six months, plus a hold and some tracking. If they do so, they need never see an IR instructor or examiner at all. A VFR Flight Review every two years with a regular VFR certified flight instructor is all that’s required to remain legal.

Some view this as insufficient and many FAA IR pilots take additional refresher instruction anyway. An FAA CFII (Instrument Instructor) can conduct an IPC (Instrument Proficiency Check) involving a couple of hours of ground school and an hour or two flight instruction. This is all that’s needed to reactivate an FAA IR that’s been dormant or expired through lack of currency.

My first attempt to do the revalidation was in the simulator. The advantages include availability (not dependent on aircraft or weather), lower cost (no AVGAS to pay for) and slightly less time (no need for power checks, refuelling etc.).

Unfortunately a technical problem aborted my test before we got started.

My second attempt using G-CORB was thwarted by a minor technical problem with our aircraft. Big thank you to the guys onsite at RGV who did their best to fix it quickly but it blew out that slot.

Third time lucky. We did the required two approaches, hold, tracking and recovery from unusual attitudes (including partial panel) as prescribed. I didn’t think it was radically different from an IMC revalidation but to a higher standard, such as flying the approach to a lower decision height.

I wore a hood rather than foggles or screens so I couldn’t see out.

Sorry – no photos or flight log from today. You’re not allowed to look out of the window and admire the scenery. My iPad was quickly demoted to the back seat too 😉

But here’s a couple of pictures with similar weather conditions