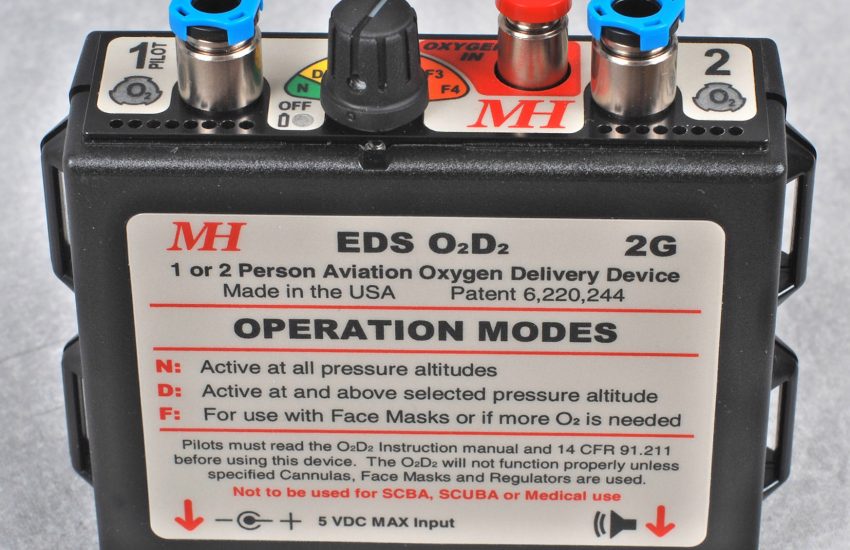 Pilots of non-pressurised small aircraft such as ours are limited to 10,000 feet, above which an oxygen system is usually required. EASA european rules allow you to fly up to 12,000 feet for 30 minutes without one; passengers are considered OK up to 13,000 for any length of time. After the few airways flights I’ve had at FL100, I have felt slightly the worse for wear and believe oxygen would help alertness during flight and health post-flight. It’s also said to be beneficial for night flights to improve vision.

Our TB20 is normally aspirated, i.e. doesn’t have a turbo to pressurise the fuel injected into the engine. This means that at higher levels where the air is less dense, it struggles to achieve anything like the power output lower down. The good news is that at these higher levels, you enjoy very efficient flight (there is less air drag to slow you down), the engine operates at a very lean mixture. Other advantages include being able to fly higher above poor weather or over the Alps and more easily getting direct clearances through congested airspace such as the London TMA.

The bad news is that climb performance deteriorates and it takes quite some time to climb up to those altitudes. ATC generally require a minimum climb rate of 500 fpm (airliners typically climb at 2000fpm) and it can cause problems if you can’t achieve that.

I asked if I could try out a portable oxygen system at altitude to see what it’s like. Jim at RateOneAviation is one of the few instructors with the equipment and expertise to do that and was happy to show me it in operation in our own aircraft.

The most popular system seems to be from Mountain High. It consists of a pressurised oxygen cylinder, two identical electronic boxes and some plastic tubing. These provide an on-demand system which only releases oxygen when you breathe in, greatly reducing consumption compared with constant flow methods. This means an oxygen tank can last very much longer, avoiding the need to refill on a long trip.

Cylinders come in various sizes and materials. Aluminium is cheaper, Carbon Fibre lighter and Kevlar lightest (and most expensive). Internal pressures are between 100 and 200 bar (atmospheres). You’ll need a regulator to reduce the pressure to something useful and this will have a simple gauge to show how full it is (like a fire extinguisher) and a tap to turn on/off. Securing the cylinder in flight can be done in different ways. Some people have pockets that hang over the back of the front seat, others have fitted brackets similar to those for fire extinguishers. You don’t really want it bumping about in turbulence and do need to be able to get at the tap to turn on/off.

The electronic boxes are battery powered and very straightforward to use. There are different models that support one or two people each, so having two boxes with two places each provides redundancy. There are several settings but you typically just switch it to one or the other. It will beep if there is a problem such as a twisted tube or low battery. They can lie on the floor behind you or mid seat, and do need to be accessible to switch on/off and see the indicator lights.

You plug in the plastic tubing into the cylinder (one per box) and also a separate tube from each box to the pilot/pax. These wrap around the back of your head and have a couple of nozzles that you stick into the bottom of your nose. It does sound awkward and feels a bit strange at first, but you quickly get used to it. There are various alternative options and formats to try out.

The type of setup was very similar to that described in much greater detail by Peter H, see photo at the bottom of this page.

Mountain High have several useful video tutorials including this one on the two ways of putting on a cannula.

We switched the box to D5 which means it automatically activates above 5,000 feet and turned the tap on the O2 cylinder. As we climbed through that altitude, there was a surprise spurt of gas up your nose and thereafter each time you take a breath there is a little burst of gas.

It didn’t take long to get used to it and I could happily cope with that for a longer flight. Some people find the tubes uncomfortable at the back of the head, hence other form factors are available with them attached to the microphone boom. In any case, it didn’t affect using the headset/mic use at all. Facemasks are required above 18,000 feet because the oxygen may not make it through so effectively with cannulas. This means you either need to get one that has a microphone built it or take it off to use the radio.

I used my portable low cost O2 meter to monitor levels, which fits over your finger, to check my levels. I didn’t go below 90% at any time. Note to self – remember to check batteries prior to use and/or take spare set, because these do run down when unused for months.

Part of the flight was just to experience such high altitudes and see how the aircraft performed. There is plenty of uncontrolled airspace north of Gloucester up to FL195, so we just made this a local flight and climbed up to FL150 (about 3 miles up).

At 5000 feet the oxygen system automatically turned on and we didn’t need to do anything for that. Climb performance with two onboard a lightly loaded TB20 on a relatively cold day was good, initially over 1,000 fpm but declining as we got higher. At about FL80 the throttle is wide open and the thinner air takes its toll on performance. However we still managed at least 400fpm and typically 500fpm at 95 knots, leaning as we got higher. Apart from leaning, there was no significant difference in operation or flight controls. The autopilot seemed very happy too.

One method to determine how much and when to lean during these higher climbs is Constant EGT – monitoring and leaning based on tracking EGT (Exhaust Gas Temperature), which Peter H describes in detail here.

We were very much higher than the clouds (tops about 4000 feet) in clear VMC. The only possible concern was what to do if there was an emergency such as an engine fire when rapid descent at Vne would be recommended. If the O2 failed or ran out then the box would warn you and you could descend to 10,000 feet under control. There have been instances of O2 failure at higher altitudes (typically in pressurised aircraft at FL250 or higher) with more serious consequences. Our non-turbo TB20 can probably make it to FL180 and possibly even to FL200, but I very much doubt I’d want or need to go that high.

There are also separate small portable units which can be used to deliver O2 through a face mask in cases where the main unit fails. These are found in pressurised aircraft which might fly in much thinner air.

There isn’t any mandatory official differences training or qualification for portable oxygen use but I found it useful to have it explained and demonstrated in action including the aircraft performance issues. This could easily be done by another pilot who uses the system rather than an instructor. For my own flight profile, I think it would be very rare to need or want to use it but might consider it in the future up to FL180 maximum.