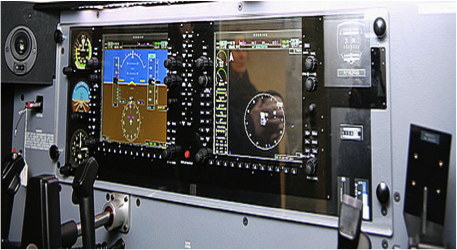 Around 2017, the simulator below was sold to Bristol and Wessex Aeroplane Club, where it is housed in a separate building and available for rent – either with or without an instructor. It is no longer approved by the CAA for flight training, and hours logged do not count towards any approved training course.  This article was based on my experience using it as part of an approved Instrument Rating. Due to the high cost of simulator approvals in the UK, I believe it is still the only Redbird simulator available for use in the UK.

In recent weeks, I’ve spent some time giving training sessions in the Redbird FNPT II simulator at Gloucester. Sitting in the right hand seat is still pretty new to me. I won’t share too much detail about the pilots involved but thought I’d make a few comments about what it feels like starting out as an instructor.

Clearly I’m not an instrument instructor, so this can’t count towards any formal or loggable instrument training. But that doesn’t stop time spent in a full motion simulator with me being useful and good practice. I’ve arranged to have access to RateOneAviation’s Redbird FNPT II simulator at Gloucester airport, on which I can run training and practice sessions. It would be a useful means to start the transition towards a full glass cockpit, because it has a G1000 panel simulation alongside three standby round dial gauges. As a CRI, I am authorised to conduct EFIS differences training which this would count towards. And it’s cheaper than airborne time, so pays for itself quickly by getting you better prepared.

In 2014, I had logged over 30 hours in it during my formal IR training, so got to know it pretty well. At that time, we didn’t use all the fancy features such as introducing different weather patterns, wake turbulence or wind shear. I’ve been shown the instructor station and how to set those things up, and can magically relocate aircraft to another point in space (a bit like Dr Who’s TARDIS).

Let’s just say that after an hour or so in the simulator, the first pilot in the left seat was sweating a little more profusely than I was. He did a great job on a practice ILS, which realistically increases the sensitivity of the needles as you approach minima. We popped out of the cloud to see the runway ahead just as expected.

That first session highlighted some homework for me too – I needed to brush up on the exact sequence of an ATIS recording and my radar vectoring could be better. I had tracked the intercept too close to the final approach fix. Subsequent sessions were better.

I’ve also had sight of the CB-IR theory course book published by CAPT Online, one of the lower cost approved training organisations (£595 including mandatory one day classroom session, excluding the seven exam fees). It’s specifically written for the scope of that course (which is the same for both EIR and CB-IR) and frankly didn’t seem too much more extensive than the IMC (now IR(R)) theory I’d done in the past. Several of the subjects do go into greater depth, but it’s said to be half of what the IR theory used to be when I did it, so a great improvement.

Since publishing this article, Rate One sold this simulator due to the high cost of CAA certification paperwork which was not justified from the relatively low usage. Time spent on it no longer counts towards an IR course, however given the CB-IR only requires a minimum 10 hours at an ATO, this isn’t a problem.

The simulator is available for use on this basis at Bristol Airport, and I would be happy to provide some instruction there on request.