It seemed a straightforward job. Fly as passenger to Coventry to collect the Turbo Arrow and return to Gloucester – just a 20 minute flight each way. The weather wasn’t entirely favourable but once the early morning fog had cleared I didn’t foresee any problem. John, my co-owner, kindly offered to fly me up to Coventry and conducted the flight with his usual calm and measured discipline.

I’ve not actually flown the Turbo Arrow that much myself although have been a passenger and mentored in it for quite a few hours. This is a T-Tail Arrow IV which flies very much like the Arrow I’d spent many enjoyable hours in, but the critical factor is not to get too low and slow on final approach or you can lose elevator authority. The Turbo side of things is relatively straightforward – just don’t overboost on take-off.

I took my time refamiliarising myself, making a thorough pre-flight and especially noting the flight speeds. Making full use of the runway in case of problems, I took off on 05 and headed downwind. In retrospect it would have been better to head south, clearing the Birmingham airspace and Wellesbourne but instead I flew east which meant I had to keep fairly low. Coventry Radar suggested I should call Wellesbourne so I changed frequencies early.

Cruise Flight at 2000 feet above the cloud

Shortly I was able to climb up through the cloud layer and enjoy the sunshine in glorious VMC on top at 2000 feet. The flight was going OK, my cruise checks reported everything was in order and I couldn’t see a problem.

But this confidence was misplaced. With cloud tops of 1200 feet and a cloud base of 600, I thought I could expedite my return with a self-positioned ILS into Gloucester. There isn’t a full radar service at the airport, so ATC vectoring isn’t available. With no other traffic around, my request was immediately granted and I was instructed to report localiser established. The Arrow has a digital EHSI on box 1 as well as a more standard VOR/ILS on box 2 and I chose to use the latter with its more familiar format. While the aircraft does have an autopilot, I had planned to fly entirely by hand.

My vectoring to self-position just wasn’t good enough, leaving too short a distance to make a good intercept at the correct height. I should have realised that from the outset. Instead, I confirmed the localiser established and started my descent with gear and flaps down. As I entered the cloud at 1200 feet or so, I encountered some quite strong convection which had the VSI indicating 2000 feet going down. Focussing on maintaining altitude, I let the heading get out of limits so at about 800 feet I went around. ATC told me to climb straight ahead and return to the beacon (the GST NDB) at 3000 feet.

John had followed me from Coventry after watching me depart successfully and had asked for the RNAV. I was wishing I’d done that. He then had to stooge around waiting for me to fly the full ILS procedure which I did in a much more orderly manner. There was still that slight turbulence and convective cloud sink at around 1000 feet but I was ready for it this time.

I think this may have been the first time I’ve gone around on an instrument approach other than in a training scenario. It seemed quite a surprise but clearly a sensible decision. Better to be safe than sorry.

Every flight is a learning experience. Flying an unfamiliar aircraft (or unfamiliar avionics) adds an extra layer of risk and complexity to be taken into account. And complacency because I’ve flown regularly back into Gloucester is another factor I should always be aware of. 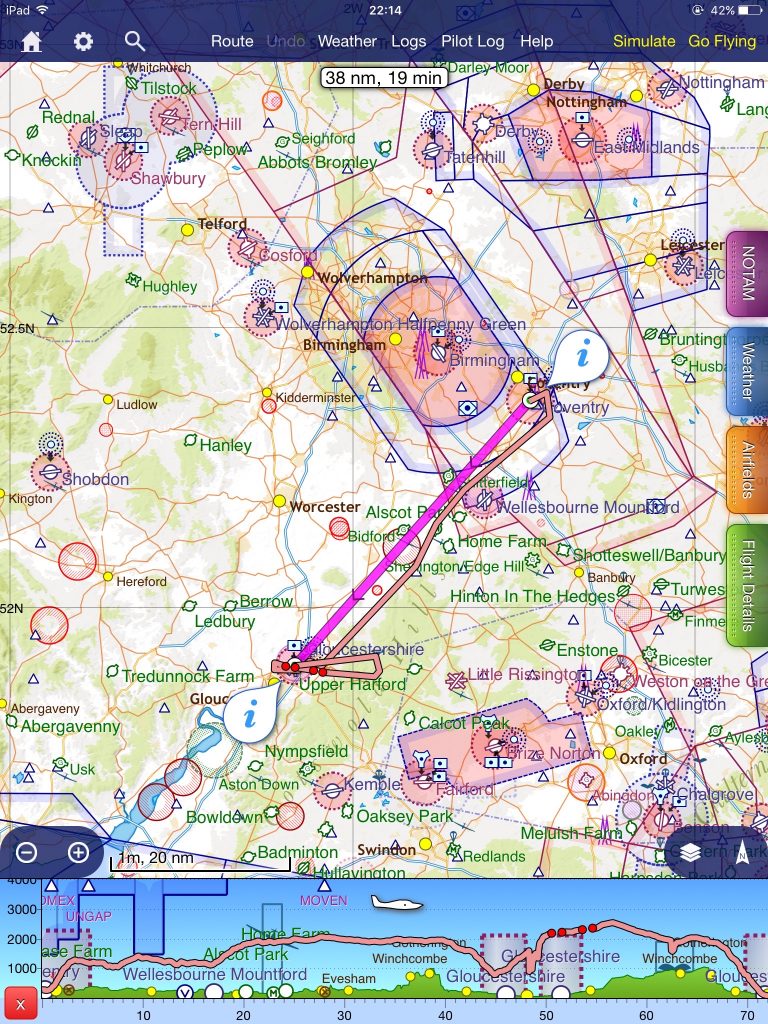