I visited my brother for a couple of days. Last time we landed at Newcastle airport and had the full swish handling service with a plush executive lounge. This time I opted for Eshott, an unlicensed airfield about 15 miles north, just off the A1. My brother lives about half way between the two, so it made little difference from his perspective. The landing and parking fees were slightly less than half the price.

I was conscious of the short runways which are 610 and 550 metres respectively. 500 metres hard runway is my lowest personal limit on the TB20, and only at lower weight to reduce runway required. With just my wife and myself travelling, little luggage and about half tanks, I played with our landing/take-off spreadsheet which indicated we would be comfortably within limits.

The other factor in my advance planning was the flight routing. Autorouter came up with an almost direct route to Newcastle but wanted to fly over the Isle of Man when I put in Eshott. I turned off the “preferred routes” option and added a fly-over waypoint of Durham which resulted in a sensible solution.

Weather did look challenging with a very strong northerly headwind with both the departure and arrival potentially in rain showers.

Departure was straightforward from the main 27 runway with a minimal crosswind in slight drizzle. Clearance prior departure was to climb to FL90 on track STAFA, reporting passing FL50. We were quite quickly heading towards some dark clouds but there was little turbulence. After joining controlled airspace under the watchful eye of Western Radar, I was handed over to Scottish Control, given my airways squawk code and routed towards TELBA and later given headings. We climbed to FL110 for a short part of the transit above Manchester, during which I requested a 30 degree right turn for weather avoidance which lasted less than 10 minutes. Once clear of the Manchester airways and leaving controlled airspace, we were passed onto to Durham (with a traffic service) and quite quickly to Newcastle Radar.

Now back in controlled airspace approaching Newcastle, we commenced a gentle descent at around 500 fpm with stepped clearances to lower levels and then an IFR transit to the west of Newcastle airport at 4000 feet, then 3000 at my request. Having heard the ATIS which promised scattered clouds at 2700 and winds from the north at 18 gusting 28 knots,  I was hoping that a level of around 3000 feet would provide some reasonable visibility.

Newcastle tower relayed that a shower was passing through and advised to route slightly to the west which I did. I think we still got the worst of it with some convective downdraft kicking off the autopilot and the VSI briefly showing a 2000fpm descent. This was following by stark audio warnings of high sink rate from the GPS in addition to the autopilot alarm. Fortunately my passenger left me to it.

It was reassuring the see the ground well below us. We had quite good visibility to our right, all the way out to sea but less so ahead. With a few miles to go and no other traffic around, I switched to Eshott Radio, got no reply and self-announced my arrival. While it was tempting to make a straight in approach, I thought it was more sensible to fly an extended pattern (circuit height is 800 feet), keeping to the noise abatement guide.

This allowed me to setup nicely for a final approach in the now horizontal sleet with an estimated 20 knot headwind. Groundspeed was down to about 50 as I crossed the threshold ensuring a very short rollout. We parked up, paid our landing fee and left without fuss. Needless to say, it had brightened up again by then.

Sights to see around Newcastle

Our trip around Newcastle included visits to two National Trust sites – Souter Lighthouse, the first in the world to be electrically powered with a design by Michael Faraday, built in 1871 and the remarkable Cragside, home of Lord Armstrong who was a pioneering engineer of the 19th century.

The coalmines and shipyards of the North East have been transformed, with many new housing developments appearing throughout the area. The street below no longer exists.

I had pondered whether to fly back airways or low-level. The GRAMET forecast on Thursday morning showed high potential for an icing layer around FL80 which the subsequent forecast was more optimistic about.

I have never departed on an IFR flight plan from a non-towered airport before, so I wasn’t entirely sure if Newcastle Radar would be able to activate my flight plan. I knew Scottish Information could do that but they can’t provide a radar or traffic service. In the end, I self announced my departure, quickly called Scottish to activate the flight plan, then switched to Newcastle for a traffic service and transit. This kind of arrangement is a lot more joined up in other countries, but the UK does provide a lot more flexibility to fly from any strip and even allows entering IMC (in Class G) prior to the IFR clearance.

As you can see from the tracker graph below, the positive IFR control really only applied when I changed squawk and was transferred from Durham to Scottish Control at FL100. I was promptly given a clearance to enter controlled airspace ontrack MCT (Manchester Airport) at FL100 (so not what I’d filed). This kept us above the cloud layer and we were VMC for the entire time in the airways. 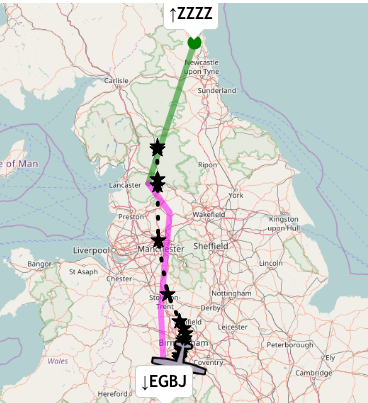 Once overhead MCT, we were transferred to another sector and given headings towards Birmingham. With about 50 miles left to go, we were vectored back towards Gloucester. I requested and was given an initial descent to FL80, then service was terminated as we exited controlled airspace. I was handed over to London Information, and switched from them to Gloucester after only 2 or 3 minutes.

We had quite a lot of altitude to lose – Groundspeed was 180 knots, so at 3 miles a minute and a cruise descent rate of 500fpm it could easily take 60 miles to lose 10,000 feet. Instead I was dropping at 1000fpm with the intention of reaching 3000 feet by LAPKU at the start of the RNAV instrument approach. I was just about down to 2500 as we turned onto the final approach track and did intercept at the final approach fix at 2000 feet as shown on the plate.

We must have just missed a rain shower because the runway was wet, but little traffic around meant an early landing clearance. The longer runway made for an easy arrival. After packing up, we enjoyed a meal at the Aviator prior to driving home.