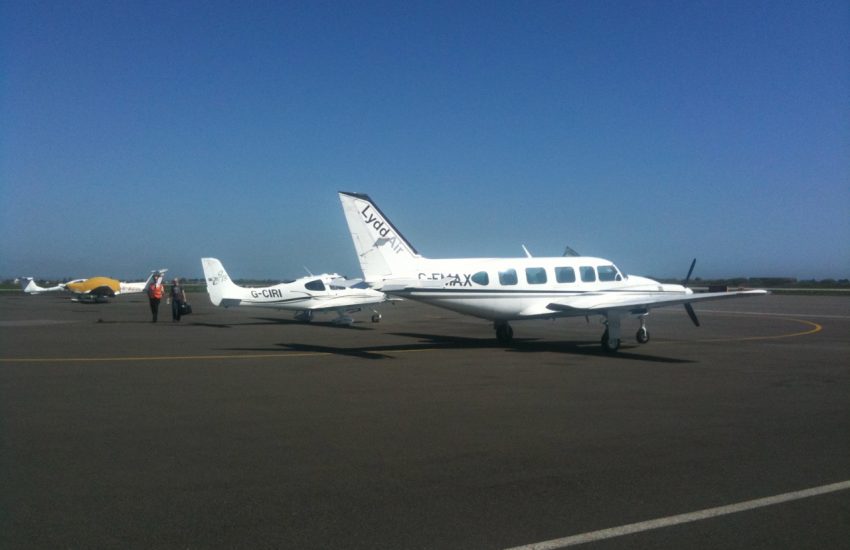 Wanting to “stretch our legs”, Andy and I arranged to share a flight from Lyneham to Lydd. I flew there and he flew back, with both legs averaging about 2 hours.

The longer flight time on the outbound leg was due to three reasons:

Andy wrote the flight up in his usual thorough detail, so I won’t duplicate that here.

For me, the flight re-inforced my cross country navigation knowledge. It included crossing a MATZ, transiting several airfields and using a number of VORs and NDBs to confirm our track. There was plenty of radio handling – we agreed beforehand that the “passenger” (can’t really use the term co-pilot here) would select the radio and navaids with the pilot doing the actual talking.

As Andy points out, it is important to have thought through the route during the planning phase and not just rely 100% on SkyDemon.

The turbulence on approach at Lydd was quite strong and I’ll know to fly faster in these sorts of conditions next time in order to punch through the gusts. A bit less flap and a higher speed worked much better and wasn’t an issue for a long tarmac runway.

Lydd is no scenic destination although the beaches nearby look OK, but the airport itself is well equipped with ILS, and the building inside is modern and with good service – we didn’t have time for the pilot shop unfortunately.

It’s also only a short hop from Lydd across to Le Touquet in France and the reason the airfield was built in the first place. Originally inaugurated as Ferryfield, the route was pioneered by Silver City Airways in the glory days of the air car ferry which lasted from 1954 until competition from improved cross channel sea ferries won out.

Hopefully we can extend our range by a few minutes to Le Touquet on another future trip – something to aim for in the summer perhaps.