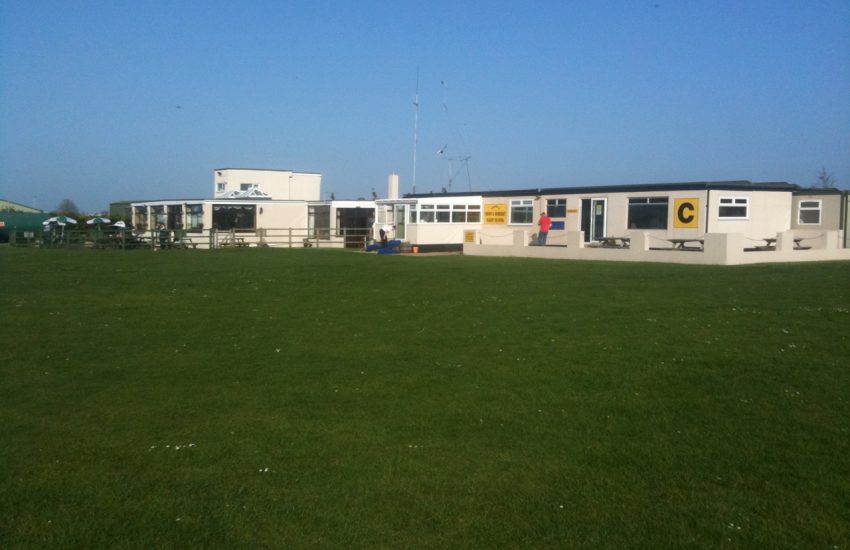 Where to go for a Sunday afternoon?

Unable to take off until 3pm on Sunday (due to family commitments), but with no hard stop on my return (apart from sunset at 8), I thought Dunkeswell would be a good choice. Although the airfield website quoted 5pm closing time, I rang to see what time I could arrive and depart.

They are open for arrivals until 5pm, but you can leave anytime before sunset on an unlicenced basis. The restaurant/cafe/bar is open till 10pm

Parachuting was also in progress , but that only meant no overhead joins. Winds wre calm and visibility good but with some haze. Despite being such a nice day, all three PA28’s were sitting in a row when I arrived. The two acrobatic club aircraft were in use though.

With no instructors around, getting authorisation for the flight involved ringing round. I was lucky to reach Tony, who I had had met the previous day. He discussed my route, confirmed that I knew who I would be talking to and helpfully pointed out there were a few airfields close by that can easily be confused with Dunkeswell. You can see this on GoogleMaps. My planned route took me over Frome, Glastonbury and Taunton so would be fairly easy to do visually.

Although I’ve had a number of flights with other pilots, it’s been a while since I flew a solo land away, so would be good confidence builder.

Nothing too dramatic on the departure which was from the intersection on 06.

Climbing up to 3000 feet when I left Lyneham Zone, I requested a change to Bristol radar for Basic service. I had the wrong frequency – there are separate ones for Bristol radar and LARS. Helpful as always, Lyneham ATC corrected me and gave me the right one before changing. Bristol then gave a good service with relatively little other traffic around.

The towns came up more or less as expected from my plot, but I found myself further south than planned – probably due to a stronger north wind than expected. Frome, Glastonbury were quite easy to spot. Wells with its large cathedral could be seen not far to the north. Soon the M5 motorway and the much larger city of Taunton loomed up ahead.

Turning south, the plog gave me only a few minutes to get there. I changed to  Dunkeswell radio, announced my intentions and asked for airfield information. An airfield came into view, but didn’t seem to match the layout I was expecting. That earlier advice about it being easily confused with nearby disused and gliding fields was very helpful. I took my time to fly around, giving everything a wide berth and orienting myself. I could see a couple of gliders and heard several aircraft movements at the field itself. I can see why doing overhead joins is so helpful when arriving at new places – you can check you are at the right airfield, see what other traffic is around and visualise the track you need to take. However with parachuting at the same site, overhead joins are  understandably not permitted.

Came in for a base leg join and landed. The calm wind and good visibility made this fairly straightforward. The circuit was busy and with another aircraft was on finals I turned off at the intersection to get out of the way. I asked on the radio for a bit of help on where to taxi and park – it seems I could have just continued down the runway and turned off onto the grass parking near the end – but instead taxied along the taxiways around the parachute dropzone and parked up as directed.

Landing fee £10 and cup of tea for 90p. Very friendly staff. One of the other pilots saw my SkyDemon GPS and we had a chat about it. I must have shared my enthusiasm for it.

Sat outside in the cafe veranda and watched various aircraft come and go while the parachutists dropped into the field just the other side of the runway. It did surprise me that aircraft continued to take-off/land and taxi around the dropzone, but this seems to be pretty standard operation there.

Since it was getting towards the end of the working day there, and activity seemed to be dying down, I thought it might be a good time to leave. I signed out and got a departure briefing from the desk. It seemed everyone then had the same idea, and suddenly there was a procession of aircraft following me towards the intersection as well as a stream of incoming traffic.

Meanwhile, the start of a parachute drop was announced. After my power checks, parachutists started floating down into the drop zone. A warning came over the radio that a student parachutist was over the field – I looked up ready to turn off the engine if he came my way. After waiting a few minutes for a gap in the traffic, I wanted to backtrack and ensure I had more than enough runway for departure. Others weren’t so concerned and nipped in for an intersection departure, including one while I was backtracking – not a problem for me and made best use of the time. With an inbound aircraft turning finals, I announced immediate take-off on the radio (some people don’t like using the term “rolling” found at military airfields) and powered up. I would have been OK with an intersection departure, but was much happier to be lifting off with some runway ahead – there is a pretty solid dyke and road at the far end which I wouldn’t want an argument with.

The route back was pretty much a repeat of the way out. A murky layer of cloud at around 2500 feet reduced the visibility somewhat. When Bristol indicated some conflicting traffic heading towards me, I climbed up to 3000 feet partly to ensure I kept well clear but mostly to see if the visibility would be better. Bristol ATC had co-ordinated with Lyneham in advance and gave me a Lyneham squawk to use as I passed south of Bath.

Changing to Lyneham approach, I got clearance and descended quickly back down to 1600 feet QFE as I entered the zone. With “wind calm” as the surface wind and no other traffic around, I had a really nice long straight in approach to 06. Deliberately landing long to avoid a lengthy taxi back to parking, this was a relaxing close to a good trip.

With nobody else left at the club at 7pm on a Sunday evening, I refuelled the aircraft from the bowser, parked it  and put it away. After a short bit of paperwork, I left feeling like I’d really achieved something.