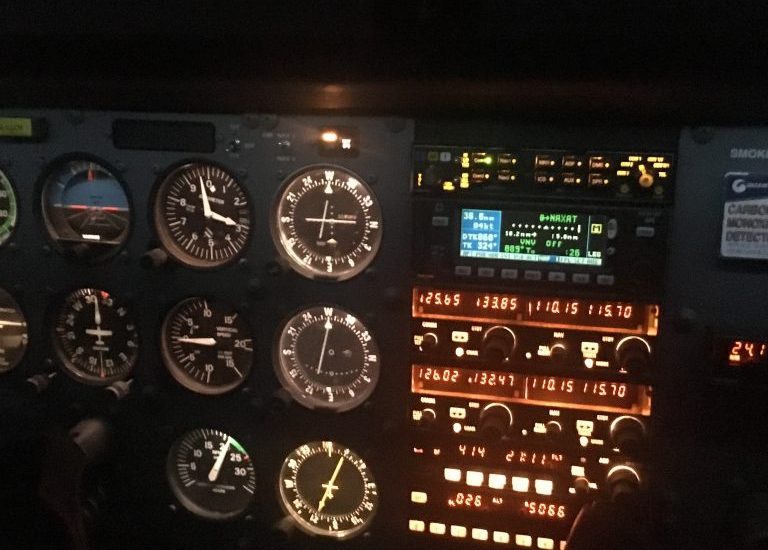 I had completed my Night Qualification in January at Gloucester, but not used it since then. It is possible to fly from Lyneham after sunset, but first you need to be checked out by an instructor. Familiarisation with the local procedures and visual references is extremely useful for any night destination, and it also helped remind me of the differences.

It’s also required to have approval for each trip from both Operations and Air Traffic Control – this is after all a full military airport and pleasure flights rightly don’t take precedence.

Equipment wise, I had brought two torches – one large one and a headband that I’ve had for many years. Roger suggested that one with a red light might be best, and these can be bought for a small sum on eBay and elsewhere. He kindly lent me his spare for the flight.

The flight briefing included explaining what the runway would look like on final approach – I could expect to see a “string of pearls”. If they are too bunched up, then we’d be too low; too strung out, then too high. We also marked up the chart with blakc ink circling all the major towns and other features we would be likely to see. Distances from Lyneham were also written on the chart, so we could compare this with the instruments.

After pre-flighting the aircraft in the last of the daylight, we setup all the nav instruments. Lyneham has an NDB and DME, but don’t have a receiver for the TACAN (a military version of the VOR).

Taking off, the string crosswind required a lot of aileron. We climbed to 3000 feet and headed southwest down to Melksham. In such a clear night, we could easily identify Chippenham, Swindon, the Membury mast and even both Severn bridges.

After about half an hour bimbling around, spotting the landmarks, looking at the navigation instruments and especially checking we could see the runway, we returned for a left base join for 24, with the strong crosswind right on limits. The instructor asked for the surface wind several times and as we were approaching at about 200 feet decided we should go around. A first landing at night in strong blustery crosswind wasn’t perhaps such a good idea. My approach line wasn’t perfect either, so instead we asked to circle round to land on 36 where the crosswind would be more favourable.

After a much better approach and good crosswind landing, we taxied back to base.

A learning point for me here was to estimate the heading to compensate for the crosswind (calculating it in your head) and setting it on the heading bug before the turn so you have something to aim for.

For next time, I am now allowed to go solo at night from Lyneham and am now also current again to take passengers at night for the next 90 days. It might come in handy for a late return from a distant trip. Roger recounted the tale of another club member who had been delayed due to a technical fault – by the time he was ready to take off again, he would not have been able to make it back before night. Without the night qualification, he had no choice but to stay over and return the next day.

I think next time a night solo to the Severn Bridges and back might be a good next step to build my confidence.