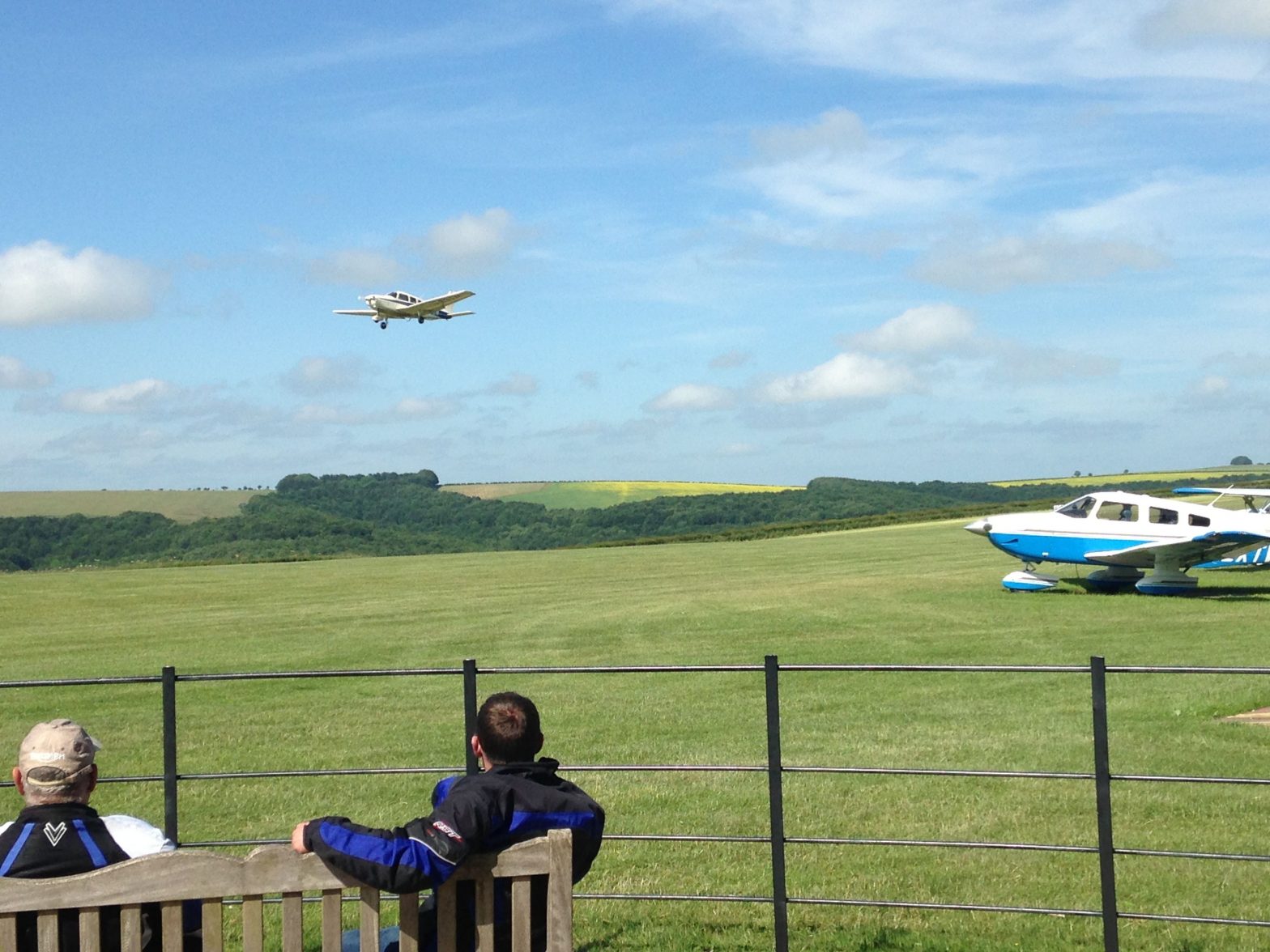 After a few weeks without a flight, I was keen to find an opportunity to share a trip somewhere. Sadly, a planning day out with Andy wasn’t possible mainly due to a combination of both our work and social commitments. Instead, Dave offered me the chance to join him flying from Kemble into Pooley’s Open Day at Compton Abbas. He’d booked one of the club Warriors (G-ELUE) which looked great with it’s brand new paint job.

Dave arranged for prior permission (essential for the open day) and I called up to check they were operating OK earlier in the day. I had tried to contact one grass strip airfield on the way for PPR, but wasn’t able to get through.

This would be an afternoon’s trip – aiming to depart around 3pm and land back sometime “after hours” between 5pm and 6pm.

It was 22 knots but not gusty and pretty much straight down the runway – if it had more of a southerly component, it wouldn’t have been safe at Compton due to rotor effects. I flew the first leg, departing down to the M4 Junction 18, throught the “Bath gap” between Colerne and Bristol airspace, then veering left towards Trowbridge. I put in two or three steep turns well above Dave’s house, then we navigated east of The Park glider site and on down to Compton.

The cloudbase was between 2,000 and 2,500 feet, meaning we occasionally dipped down to stay VFR. With the strong wind, it was slightly turbulent and might have upset a slightly nervous passenger, but there was no loss of control. We were visibly crabbing with a strong crosstrack effect due to our cruising speed of around 100 knots and wind (at that height) of perhaps 25-30 knots.

As we approached Compton and switched to their frequency, we heard and saw a few departures. With the low cloudbase, it wasn’t really feasible to make an overhead join (Compton is 800 feet above sea level), so we announced our plans and joined downwind. It’s quite a wide circuit pattern there and we did our best to keep clear of the noise sensitive areas. Late downwind, we saw a couple of aircraft climbing above us having turned west after departure. I deliberately made a slightly higher approach, the initial touchdown was OK but there was a slight bounce – whether that’s down to the slightly bumpy runway or my slightly high touchdown speed remains a matter of debate. We vacated as quickly as reasonable and taxied back to park in the visitors area.

We registered at the Pooley’s stand, where we received a “goody bag” including a 2013 VFR guide, and book and catalogue. I enquired about what charts are best for European trips and was recommended the Jeppesen VFR ones which cost around £12 for unlaminated versions. Booking in again at the office, we didn’t have to pay a landing fee but they were pushing sales of their latest “Compton Girls” calendar quite hard. It was a far easier sale at in the restaurant where we both couldn’t resist a home made cake with our mugs of tea.

Sitting outside, we met up with a friend and his wife who had flown in from a private strip in Bristol. The whole venue was still abuzz with visitors both inside and out, watching the spectacle of many aircraft movements. Arriving late in the day, we’d (thankfully) missed the busiest period, but there was still quite a lot going on.

Dave flew us back uneventfully. He’s acquired an iPad mini and a secondhand Lightspeed ANR headset, both of which he was very pleased with. Slightly surprised, we found Kemble tower was still operating at about 1715 and were able to provide an AFIS service. They normally close at 1700 but sometimes stay open when it’s busy or something’s on. We refuelled from the bowser and parked up, contented after a good day out. It had been great to get back up in the air again – I was already feeling a bit rusty with some of the usually straightforward things like the radio calls, so hopefully I had brushed some of this off.