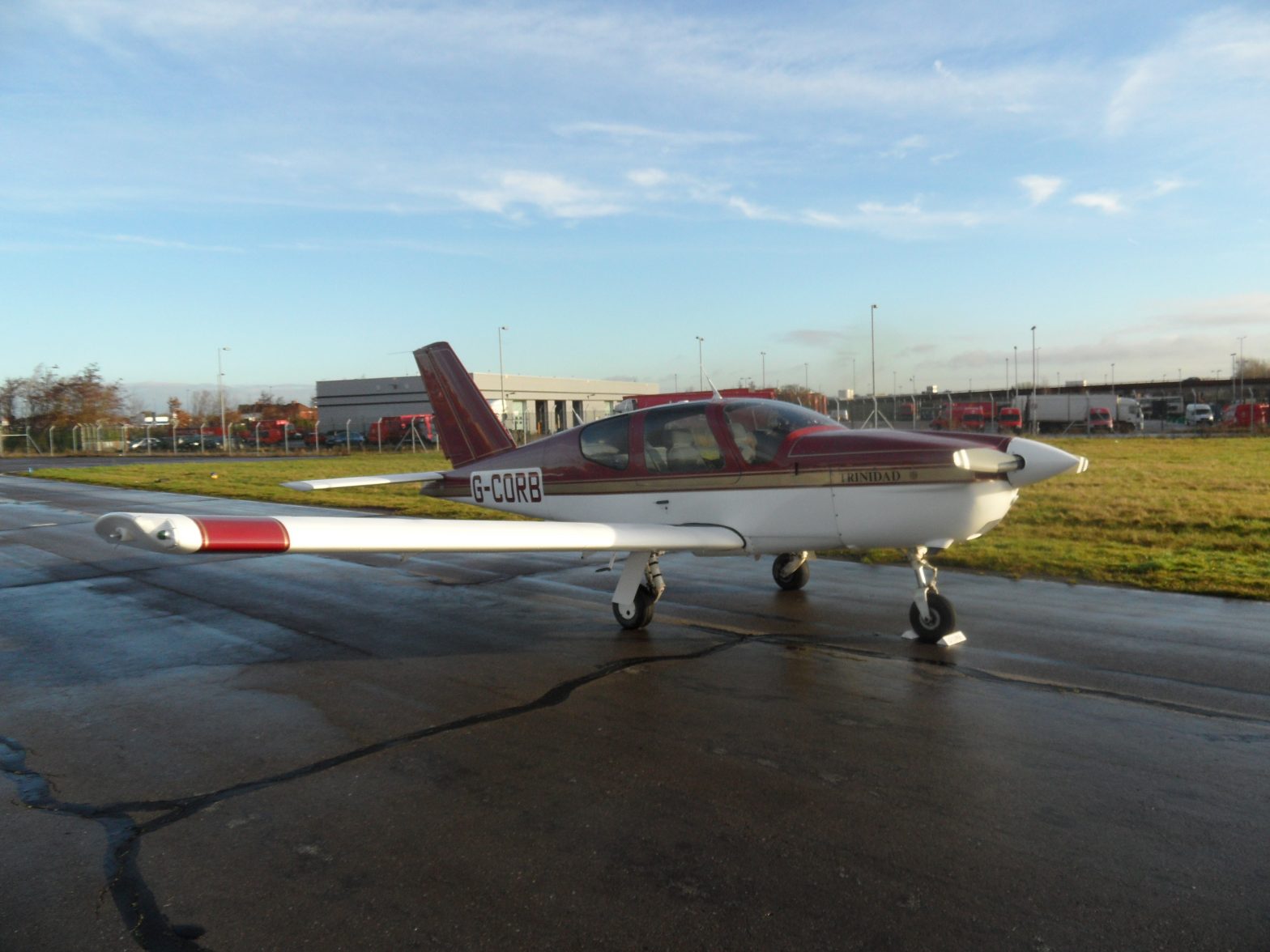 Having just bought into a share of a Socata Trinidad TB20, the next step was to complete 5 hours of dual instruction. This is a requirement of the insurance policy before any of the pilot owners is allowed to fly solo – even for those with >1000 hours and full Instrument Rating. But it’s also a very sensible approach – this is quite a powerful and capable machine with plenty of new avionics to get acquainted with.

I booked this up, taking two full days during the week with one flight in each of the mornings and afternoons. This was with Phil, the CFI of the Cotswold Aero Club, an extremely experienced instructor and with whom I had completed my Night Qualification a couple of years earlier. His style is fairly relaxed overall, but includes quite clear feedback about what you are doing (or not doing), especially if there are any safety issues.

These flights included some general handling (stalls, steep turns etc.), PFLs, landings (including flapless), autopilot, coupled RNAV GPS LNAV+V approach (which locked onto the glidepath too), NDB holds, landaway at a grass strip (850m) and a bit of fun stuff where Phil demonstrated just what the aircraft is capable of. Oh, and plenty of checklists to follow, airfield passes to be issued, learning local procedures at Gloucester (booking out etc.). The initial poor quality of my PFLs and landings improved during the training flights.

We also managed a landaway to Garston Farm, which unbelievably, Phil had not been to before. We enjoyed a cuppa with the owner, who made us very welcome.

There are a few differences from the Warriors/Arrow which I usually fly:

– It’s hangared. There’s also plenty of space in the hangar for various bits and pieces to be locked away in cupboards – everything from cleaning materials, spare oil, battery (for running on ground power), lifejackets etc. A bit like a mini-clubhouse, although we can also use the adjacent Cotswold Aero Clubhouse to sit and chat/drink coffee etc. Even so, the cover is put on during the winter to keep the avionics dry and de-humidifiers are used throughout the year.

– It’s quite heavy and not feasible to manually pull out of the hangar single-handled. The group own a petrol engined tug, really a lawnmower with a single big tyre, which makes it easy to move around. There is a knack to starting this up (and keeping it going) whcih I’ve just about mastered.

– There’s more space inside. It’s really quite comfortable. Gull wing doors also make it easier to get in and out, although they could clonk you on the head if not careful or it’s windy. The baggage compartment is pretty roomy too. I think passengers (especially first time flyers) would find this more attractive, plus it’s well setup for touring.

– The “full and free” movement is about half that of a Warrior. Instead of almost 360 rotation of the yolk from full left aileron  to full right aileron, its more like 90 or 120 degrees. Plenty of elevator movement, and the rudder is huge so the demonstrated crosswind figure in the handbook is 25 knots.

– Take-off is with one stage of flap. The acceleration from the 250hp engine is quite noticeable, a bit like driving a more powerful car than a regular family one. As with the Arrow, you really notice the acceleration when you raise the gear.

– Setting the mixture is critical. There is a JPI fuel meter and digital temperature guage showing both cylinder head temperatures (CHT) and exhaust temperatures (EGT). Lower fuel rates achieve optimal performance (pilots pay for the fuel used rather than an all inclusive wet-rate), while high temperatures could reduce engine life (any CHTs over 400 degrees can melt the aluminium and is to be avoided). These figures are recorded and then downloaded, so any transgressions can be spotted – there is no escape for not keeping these under control.

– Fuel balance is very important. The tanks hold double that of a Warrior – up to 320 litres – spread throughout the wings and the maximum imbalance should be 75 litres or less. So remembering to change tanks every 30 minutes is key. Otherwise flight characteristics can change and landings in particular could be much more tricky.

– The GTN650 avionics are really easy to use, with nice touch-screen menus that make most things only 2 or 3 button pushes away. The common tasks (e.g. changing frequency, dialling up new frequencies, entering a flight plan etc.) are pretty straightforward. Some of the more unusual things (e.g. calculating wind drift) are slightly more tricky.

– You don’t ever need to touch the transponder. It automatically turns on (ALT mode) when you take off, and turn off (standby) when you land. Squawk codes can be entered via the GTN650.

– The autopilot makes life really easy. This one has both altitude and heading tracking, and can also intercept and capture an approach track. There’s an extra button to push if you just want to temporarily override it (eg when we had to avoid a glider nearby), plus a quick release/disengage button on the yoke too. However you do still have to turn the OBS knob at waypoints, which the GTN prompts you to do – it would need a further upgrade to automate that as well. Sometimes it didn’t want to intercept tracks when wildly out and needed a bit of help by turning the heading bug. I also need to understand what scale it’s working to – the max deflection shown varies depending in the mode in use (en-route, approach etc.)

– Turns are effortless. Even a 60 degree turn at 140 knots at cruise power resulted in no height loss. At these faster speeds, standard Rate One turns require a higher bank angle.

– Dropping the gear and using the second stage of flaps puts it into a really steep descent. This is very noticeable during the PFLs and it would be easy to overcook an approach (i.e. deploy gear too early, which I did at least once).

– No need to keep a trickle of power on during the round out when landing as needed for the Arrow – you can chop the power as you cross over the hedge. Beware that any excess approach speed quickly results in a much longer landing roll. It wants to keep flying and stalls gently, like a Jodel or Robin.

Next step will be to make some short solo flights, and then extend those to places further afield. This is very much a “going places” aircraft. It’s a great group to have joined and I look forward to some excellent flights in the near future.