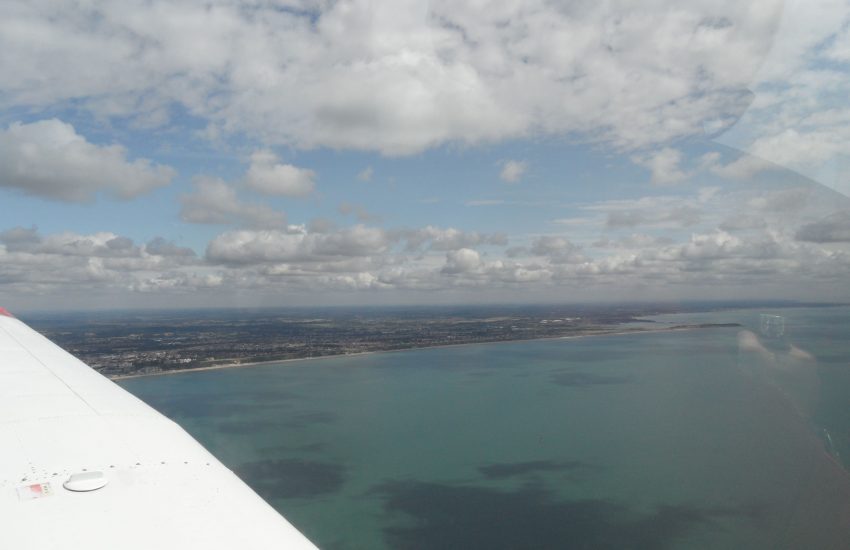 Probably because my confidence had been boosted the previous day, I decided that the weather forecast was good enough to fly to Dinard in France for a daytrip today. This had been promised to my daughter for some time, and she had brought along a couple of her friends who were also looking forward to the flight.

The usual preparation prior to a cross channel flight

I filed flightplans using SkyDemon and sent off the GAR forms to the Border Agency (and Gloucester airport). There’s no need to PPR with Dinard beforehand. While my daughter drove us to the airport, I left them in the departure lounge while I preflighted and topped up the tanks to full. I had recalculated the W&B the previous day to confirm that full fuel and 4 people were still well within limits.

We all wore lifejackets, and took the liferaft and PLB.

The forecast had shown some rain clouds to the south towards Bristol, but indicated clearer skies by the time we reached the coast. The METARs and TAFs looked OK to me, but in retrospect I must have misread them. We’d need to be able to fly VFR throughout, especially through the Jersey Zone, where Special VFR rules apply and you can’t fly above the clouds out of sight of the surface.

After departure, rather than climb to our proposed cruising height of FL50, I kept under the clouds initially at about 2500 feet to remain VFR – I didn’t want to get caught up inside the towering CBs in the area, although these should only be visible for the first 30 miles or so. Bristol Radar were very welcoming on first contact and passed us on to Boscombe, who I’ve never spoken to before (they only operate during the week). Bournemouth confirmed that Danger Area 31 was active up to 5,000 feet, and I wasn’t in a position to climb up through the dark CBs to reach that.

We were fine until we reached about Compton Abbas, when the cloudbase dropped down further. Bournemouth gave us a VFR transit to Poole and I thought I could see better weather ahead. But as we were coasting out it became pretty obvious this wasn’t the case – the cloudbase dropped to 1000 feet and so I circled around a couple of times looking to check this wasn’t just a temporary condition before heading back towards the coast. Bournemouth quickly noticed my change of flightpath and asked my intentions.

I initially asked for a transit north to retrace my steps, but once reaching Tarrant Ashton, I realised the weather wasn’t suitable for VFR and didn’t like the idea of climbing into cloud with embedded CBs, so asked to divert to Bournemouth.

The controller was very helpful, cleared me to enter VFR not above 2,000 feet and told me to expect a downwind join. With the airfield in sight, we were handed over to tower and a joined downwind to land on 26. I didn’t have the plate handy (not expecting to land here), and was given progressive taxi instructions to the GA handling area via Whiskey (quite a long way away) where handling were expecting me. I also confirmed they had closed my flightplan.

Having stopped outside a big “C” I was looking around to see where to go when a marshaller with the mandatory yellow jacket ran out and directed me to parking. Bournemouth Helicopters are the appointed GA handling agents for the airport. I’m sure they take a bit of stick for the relatively high fees (which were somewhat more than Liverpool, it has to be said), but did provide good service and answered our questions. The Strasser scheme, whereby GA pilots who genuinely divert because of bad/unexpected weather or mechanical problems, doesn’t apply here – I’m told that there had been an incident in the past where someone abused the system – so we had to pay the full fee. However, this was less that the flight would have cost to our original destination and I was grateful to be able to land there.

We then took a taxi into town which made the landing fee seem quite reasonable by comparison. It seemed quite a warm, sunny and generally pleasant day so we strolled around the park and beach before stopping at Harry Ramsden’s for fish and chips. There were plenty of foreign school tour parties sampling the national dish.

We walked up and down the beach, where there were some brave souls swimming in the sea, great displays of kite surfing and generally many people enjoying their holiday break.

A taxi took us back to the airport – the GA facility is at the other end from the commercial passenger terminal, in the middle of quite a large industrial park. Our driver wasn’t familiar and had to ask directions and still made a wrong turning before dropping us off.

We had to pay a further parking fee because we’d overstayed the initial 4 hour limit. I was then shown the briefing room where you book out by filling a form in on the computer – which staff quickly did for me – then we were walked out to the aircraft and ready to depart. The cafe and toilets were in quite good order.

Expecting to have to dodge one or two CB’s on the return flight, I climbed up to FL70 and was able to steer around them. This was a much more comfortable and enjoyable experience for the passengers, who could see mostly innocuous white fluffy clouds rather than the threatening black ones. Bristol gave me a Basic Service and a transit clearance at FL70, despite my slightly meandering path (wanting to stay VFR so I could see where the nasty stuff was). They couldn’t help much with identifying where the storm cells were, explaining that their radar wasn’t really designed for that purpose. Bristol also negotiated my approach back into Gloucester.

I had asked for an RNAV approach partly to ensure there would be no issues if the VFR conditions deteriorated and partly to continue familiarisation with the procedure. Gloucester already had one Cirrus commencing the RNAV from the north, so warned me to expect clearance about 8-10 minutes later. I was offered to take up the hold (which would be in IMC) or just hold off outside the area. They also pointed out I’d not reset the squawk to 7000 VFR, which I’d overlooked when changing over from Bristol.

Rather than switch to a VFR approach, I decided to accept the delay and we had some fun making plenty of steep turns to enjoy the views around Kemble. Keeping a careful eye on the GPS to avoid encroaching airspace, I requested a decent twice to avoid a lowering cloudbase. Gloucester didn’t have working radar, so had to check with the other aircraft what their altitude was before being able to clear me to 1,000 feet above that.

The RNAV procedure itself is becoming more familiar, and works well even without the autopilot. With around a 10-12 knot crosswind, I was offered a straight-in on 29 or break-off for 22, and chose the latter, resulting in a gentle touchdown and shorter taxi back to parking.

This was one of the very few times I’ve had to divert, and was certainly the right decision. Although a very capable aircraft, the TB20 needs a longer landing (and take-off) roll than the PA28’s I’m used to, which reduces the options of airfields you can divert to. It was also a bit of a wake-up call about how well I’ve interpreted the weather forecasts, or how much they can change. While there was pressure on me to complete the flight as planned, we still had a good day out and enjoyed some time at the seaside. Most of all, we were safe.