After our first week on Ile de Re, we flew direct La Rochelle to Quiberon – about an hour’s VFR flight (compared with 3h30 by car or 5h19 by train). Direct flights to/from the UK to Quiberon aren’t permitted – you must land at an immigration “Port of Entry” first, both inbound and outbound – but there are no such formalities for flights from any French (or even Schengen) airfields. I didn’t bother filing a flight plan, even though this would be over water, but we did wear life jackets.

Getting back in through the private pilot’s gate using a security code wasn’t a problem. After loading up with luggage, I refuelled using the self-service BP pump (we have a group BP fuel card). It was fairly straightforward but there were a few minor niggles – I put the card in the wrong way round at first; the screen contrast made it difficult to read; once approved the pump didn’t start and I needed a pompier to show me how to reset the mechanical counter before it switched on. You can also pay by normal credit card here, but the self-service is not limited to only when staff are available.

The airport was busy with arrivals from Ryanair and Jet2. Easyjet and FlyBe also serve this growing destination. It was unusual to see parachuting in progress alongside commercial jet operations – there’s also an aeroclub offering flight lessons and “Baptisms of the Air”. Overall, it’s not that busy an airport but plenty of variety and seems well run. There was no “booking out” procedure – I just called for start and explained it was a VFR departure to Quiberon. We were allocated a dedicated squawk. We backtracked runway 27 and took off to the north west, allowing us to fly just to the north of the main road bridge and offshore from our holiday flat in La Flotte.

A thin cloud layer at about 1200 feet made me decide to keep fairly low and I flew at about 1000 feet manually all the way (you’ll see from the log the height varied a lot more widely than when using the autopilot). We stayed on the tower frequency until at the edge of the La Rochelle approach zone and were then told to freecall Nantes Info. One new term for me on the radio was being asked for my “Provenance”, which means departure airport. On requesting a Flight Information Service, I was also asked for persons on board and endurance.

There were great views of the coast, plenty of pleasure craft on the water, and several interesting islands to look out for. About 10 miles out from Quiberon, I requested and switched to their tower who spoke English to me and confirmed runway 29 in use, little wind, one aircraft in the circuit. After initially announcing my intention to join downwind, I changed my mind and announced for a straight-in approach. The tower co-ordinated communications with the other (French speaking) aircraft, and ensured we had it in sight. We spotted the other aircraft on base when about 4-5 miles out, and he completed a touch-and-go when we still had about 2 miles to go. Picking out the airfield itself wasn’t immediately obvious, but I spotted a gap in the treeline that looked to be about the right place. Sure enough, the runway itself became visible as did the peripheral road with traffic just before. I don’t think my passengers recognised the runway until we were almost on it. 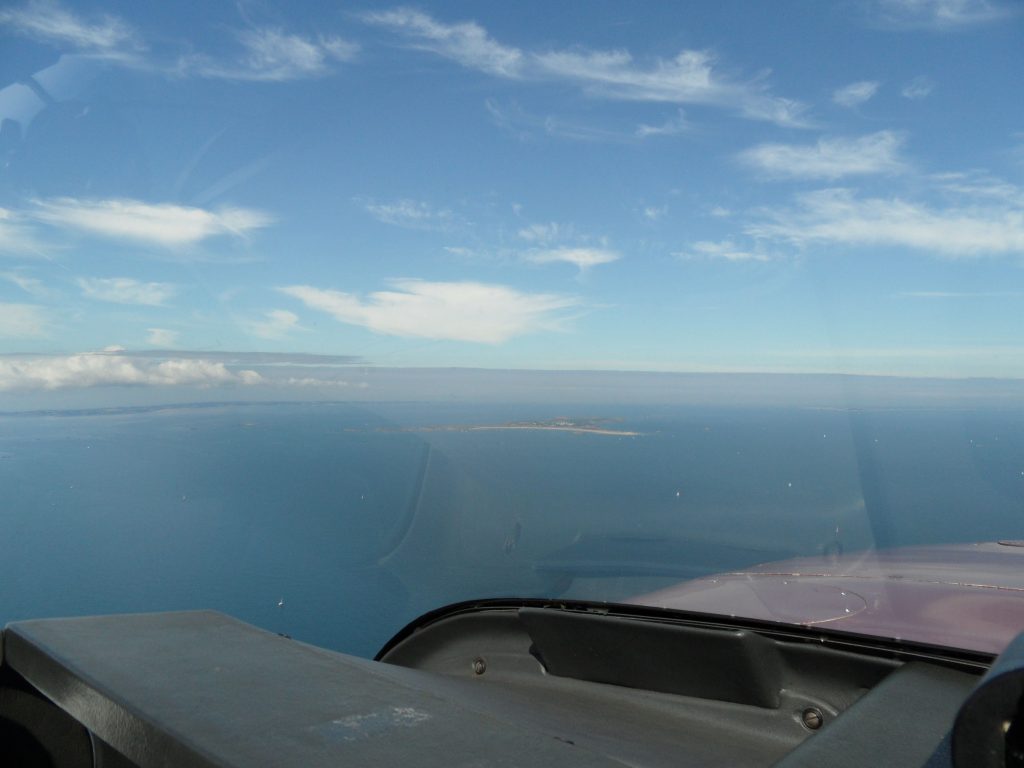 I did get a parking spot on the hard apron. There is also a lot of grass parking available here – you don’t need PPR – and although quiet today, I was told it might get busy from the following week when the main French school holidays start. The tower staff were extremely friendly, were aware of my early enquiring email from the previous week, happy to speak English and told me I can come and go whenever I want. (Although it’s only English on the radio when the tower is manned). The fuel pump is TOTAL 24 hour self service but they also take credit cards in the tower. The aeroclub restaurant was lively, (the staff also speak English and made us welcome), and we enjoyed a simple lunch before walking into town to find our accommodation.

There’s a campsite across the road and an Ibis hotel (with a nice swimming pool) a few hundred yards away (or a Sofitel with Thelassia at twice the price). A town bus circulates around Quiberon every hour, passing the airfield at 42 minutes past the hour. A 1 Euro ticket lasts all day.

Probably the most surprising view throughout the day was that on the face of the check-in lady at our self-catering apartment. Turning up on foot with only backpacks she asked where our car was, and how we had arrived. (We initially left our luggage in the plane). When explaining we had arrived by our own private plane, she could not quite comprehend, and then seemed to decide that if that’s what we want to do, it doesn’t affect her. Whether she thought that flying in privately should mean we would expect to stay at the up-market Sofitel or not, I will never know.

Quiberon offers a huge range of tourist activities including (but not limited to): sailing (yachting, catameran, dingy), canoeing, walking, cycling, horse riding, quad biking, fishing, shopping, sandy beaches, swimming, rockpools, golfing, “go-ape style” rope course in the trees, crazy golf, fleamarket, ten pin bowling, billiards, wide range of restaurants and bars, cinema, boat trips to nearby Belle Ile, indoor swimming pool, tennis courts, casino…. and of course the aerodrome with its flying school and aeroclub. Accomodation is available throughout from 5 star hotels to apartments, caravans and camping (there is a camp site across the road from the aerodrome, and an Ibis hotel about 500 meters away).

We were there on July 14th, which is of course Bastile Day, and the celebrations included plenty of fireworks and an outdoor band. On the day of our departure, there was a “Festival of Sardines” – another excuse for a party, as well as a visiting circus. Sardine fishing (and canning) used to be the major industry here until tourism took over, and there is still a large canning factory in operation.