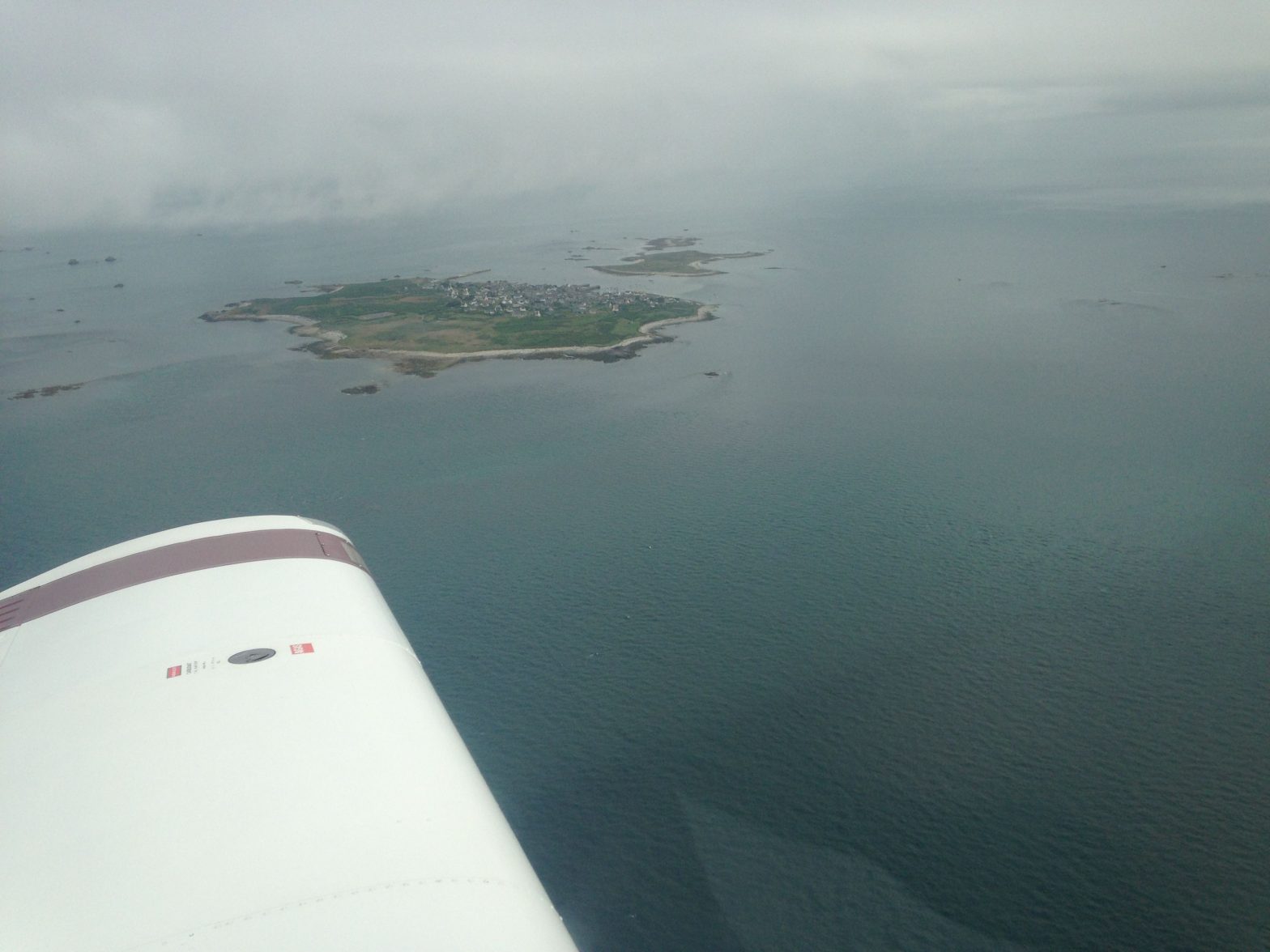 I confess to getting a bit restless on holiday – I’m not one for sitting on the beach, so we agreed that I would make a flight while the girls sunned themselves at the seaside. The forecast looked great – a high over eastern France – and I thought would be good for any direction. After discounting Belle Isle (only 9 minutes away, and the airport far from anything else), I decided on Ouessant (LFEC), an island off the north west tip of France. It is towered, so would speak English during opening hours.

I checked with Quiberon tower about which frequency to speak to for a transit through L’Orient airspace and that all Danger Areas were inactive (apparently they had all been NOTAM’d closed for the summer). Taking off in the sunshine, I got some great views of the “almost island” of Quiberon as well as Belle Isle. My contact with L’Orient approach used a different frequency than expected. I was flying at around 2500 feet, and the chart shows different frequencies above or below but I was using a third. Some clouds appeared and I had to vary my altitude to maintain VFR. The radio conversation isn’t quite as formal as in the UK – no specific “cleared to transit controlled airspace”, but I was asked to provide number of persons onboard and endurance, then given a squawk.

The autopilot which had been playing up on recent flights decided not to work at all today. I tried to reset it without success so everything was handflown (as can be determined from the wobbly lines on the flight log). [After returning to the UK, it was diagnosed as a sticking servo which wouldn’t engage properly]

My routing was up the coast to Concarneau, then towards Point de Raz, where I saw the Ile de Seine and one of the strongest tidal channels in the area. By this time, the cloudbase was starting to become a problem and I had to descend below 2000 feet and dodge around a few. I hoped this was a temporary problem but the clouds were becoming thicker and lower.

The controller instructed me to change frequency – contact, not freecall – but I couldn’t raise anyone. On reverting back, I was informed that the new frequency wasn’t manned that day and remained as before. That’s never happened to me before.

Just offshore Brest I could make out one or two other islands quite clearly – I didn’t know those existed – and thought I could see Ouessant itself under a cloud and reported the island in sight.

Iroise Info (pronounced Ear-Wazz) advised me that they had been in touch with the island tower. Weather conditions on Ouessant were reported as 200 feet cloudbase and less than 1000m RVR, and ATC asked me what my intentions were. Obviously this wasn’t feasible even with IFR (the NDB approach there has a minima of 770 feet QNH), so I immediately announced I was aborting and returning to Quiberon.

In between the patches of clear views, the clouds were becoming more difficult. The controller asked my flight conditions, which were still (marginal) VFR and this prompted me to ask for an IFR clearance direct back to Quiberon. I negotiated 4000 feet rather than the 3000 feet first offered and climbed up through the layer clearing the cloud tops at around 3000 feet. I was given a couple of headings to steer, then “own navigation”. It was a much easier flight from then on, with the clouds thinning out around L’Orient to give glorious views of Ile De Groix. I returned back VFR into Quiberon.

Advising my return, Quiberon AFIS asked me for my “provenance”. It’s an unusual term in English, meaning my departure airport, which in this case was the same. They weren’t to know I hadn’t landed anywhere else during my flight.

Of course it had been a glorious sunny day there, completely CAVOK all day. I had a pleasant lunch at the clubhouse again, soaking up the atmosphere and watching the occasional flight movements.

On arrival, refuelled using our new group TOTAL card for the first time. This allows 24/7 self service fuel at many airfields in France, and could well come in handy for quick fuel stops in future. These cards have only just been authorised for account holders who don’t have a French bank account.

Today’s learning point (apart from more thoroughly interpreting the weather forecast) is that the different radio procedures in France, especially IFR outside airways, aren’t entirely clear to me and I can see I’ll need to try to clarify and/or research those further.