A daytrip to Jersey in TB20 G-CORB, outbound airways FL90 returning VFR at between 1000 feet and 6000 feet on a more direct route.

The weather had been poor for flying all through December, with low cloud and strong winds. The forecast was excellent for today, just a couple of days before Christmas, and I was able to share a flight with Ben who lives nearby. I’d been promising him a flight for some weeks, and had to cancel on previous occasions. He’s retired and has already started PPL training, but making little progress due to lack of suitable flying conditions at this time of year.

Adam also joined us, and was very keen to experience his first airways flight. He had one scheduled the following day, flying with an Aeros instructor in a warrior from Gloucester to Cardiff, but I doubted the weather would be suitable (actually the weather was just good enough to make it). So although the most direct route is VFR, I planned an IFR airways outbound and VFR return.

NOTAMs showed that most of the military danger areas were cold throughout the holiday period, and even Plymouth Military radio was offline. A quick call to Jersey Aeroclub confirmed they were open (actually PPR isn’t required) but that the kitchen was closed for hot food. I tried to download and submit the Jersey specific GAR form in advance. However it’s a fairly unfriendly PDF form which didn’t work on my computer. I filled this in on arrival in Jersey. As required, I filed GAR forms for the UK for both outbound and inbound legs, in addition to flight plans, and submitted those more than 12 hours in advance.

Outbound IFR routing from Autorouter was

Adam has written up an excellent and extensive account of both flights on his blog. My only comments would be that the long wait at the hold for our IFR departure clearance (almost 15 minutes) was a surprise – usually this comes through almost immediately. The reason we were given was that there was another flight inbound to Brize – it seems strange that the entire clearance system can be held up for so long by a single other transaction. Hopefully this was just an abberation and won’t be a regular occurrence.

The handover to London Control was at FL60 which meant I had to make a climbing orbit before joining controlled airspace. The initial clearance is usually to join MALBY level at FL80 (unachievable when flown direct due to climb performance) but once in contact with London Control they are usually happy for you to join in the climb.

The outbound flight was pretty straightforward apart from that. I had to prompt ATC en-route a couple of times for onward clearance. Even at this time of year, the airwaves were pretty busy around London with many commercial airliners routing through – you have to keep sharp and listen carefully, responding quickly when prompted. That requires some multi-tasking when also trying to pickup the ATIS or chatting to passengers.

Approach into Jersey was via the standard Jersey 1 arrival and vectors for the ILS. I was pleased to be able to use the GTN 650 and autopilot correctly throughout the sequence, with the system switching from GPS to VLOC modes prior to intercepting the ILS.

The grass parking at Jersey was slightly muddy and so the refuelling truck couldn’t drive close enough to our aircraft. I had to come out and move it a few yards forward. The low duty-free prices are very attractive, with a further discount for AOPA members. Read more detail and view more photos of the airport from my previous visit in the summer.

Flightradar24 logged our outbound flight until we descended out of its range. Autorouter flight tracker plotted our airways route and reported waypoints. I also recorded a cockpit video shown below speeded up 8x.

The VFR return leg was quite a contrast, more turbulent at times.

Prior to departure, a large passenger jet landed and this time I appreciated the full 2 minute delay imposed by ATC to avoid wake turbulence.

The routing using Skydemon was pretty much direct. I had originally planned this at 3000 feet but actually flew at 5000 feet so made a slight left kink to remain outside airway Q41 which descends down to FL35. When I requested a climb to 6000 feet to remain VMC above cloud, Jersey granted me clearance “not above 8000 feet” which provided maximum flexibility.

I also planned remained clear of Bournemouth and Bristol airspace, and had to descend to about 1000 feet AGL below a threatening rain cloud just north of Bournemouth, after which it became almost CAVOK again. We circled around Ben’s house near Bath with a nice steep turn, keeping just outside Colerne’s ATZ. 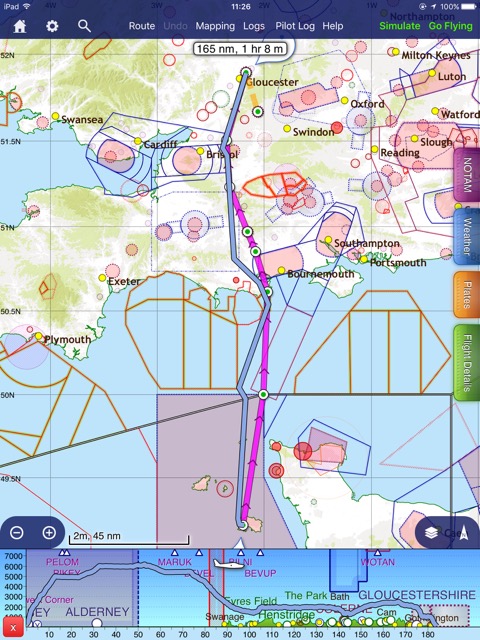 It was great to hear that both passenger’s enjoyed the flight. I think Adam is enthused enough to proceed with the theory aspect of the Instrument Rating in 2016. Ben was also quite keen to restart his PPL training and will be doing so as soon as weather permits.