A strange mix of destinations you might think. Time for me to fly CORB again, our TB20 share-o-plane at Gloucester. I’d promised Adam that we’d fly the IR Skill test route to Cardiff (he’s actively working through the IR theory exams at the moment). Having not actually flown that since my original test, I thought it might be good practice as well as a measure of whether I’m still up to standard.

In addition, for something new to me, we arranged to land at Birmingham Airport, which Adam had previously visited. Their 3000 metre (10,000 feet) runway is long enough for A380s, but it’s renowned for strong crosswinds.  A short final stop at Tatenhill, a much smaller GA airfield, would complete the day out. Elizabeth, a budding PPL student who soloed earlier this year, came along too and both took turns to sit up front.

Perhaps I was a bit too casual about flight preparation – it wasn’t a proper test – so despite confirming that we didn’t need PPR at Cardiff, I left it a bit late to file the IFR flight plan and did this just before leaving home in the morning. I struggled to get Autorouter to agree with my simple route (Gloucester – BADIM – ERNOK – Cardiff at FL80) although it probably would have validated it if I’d spent a little more time on it. So instead I reverted to EuroFPL which I had used on the test. My haste became apparent prior to departure when Gloucester ATC had no record of my flight plan. Probably because it was a quiet Sunday morning with little other traffic, they were able to be extremely helpful and managed to sort that out for me over the radio but told me not to expect an airways clearance. Full marks for top service from one of Britain’s best GA airports.

The reason for the slightly quiet day was probably the wind – a strong wind warning in the forecast and up to about 20 knots. Microlights risk taking off while taxiing in these gusty conditions.

The flight certainly wasn’t nearly as stressful as when on test. As per test profile, I turned south towards BADIM, intercepting the NDB and tracking 222 degrees, remembering to listen and identify that the beacon was active. I didn’t put a hood on but did focus on the instruments as we climbed through broken cloud. Bristol did give me a traffic service and a clearance to enter controlled airspace in the climb up to FL80 on-track BADIM. In the airway, I switched on the autopilot and listened ahead to Cardiff’s ATIS. A minor mistake was omitting to state the we had the ATIS by giving its information letter on first contact with Cardiff, but that was quickly resolved. At least I didn’t say “we have the ATIS” which I heard another aircraft report.

As per the usual test route, I was cleared by Cardiff Radar to CDF (the on-airport NDB) via ERNOK. I didn’t readback the “via ERNOK” correctly which the controller spotted. We were indeed fortunate that they weren’t busy and could accommodate our request for vectors to the ILS. Again, perhaps that strong wind had put some pilots off.

There are two plates for Cardiff, with different glideslope intercept distances and altitudes – helpfully named Y and Z for Category C/D and A/B respectively – we’re Cat A or B – which have different intercept altitudes and distance from the threshold. We briefed the plate, including confirming the glidepath intercept, missed approach procedure and minima. We were cleared for the ILS when at 2200 feet and I believe technically could have used either plate since neither Y or Z was explicitly mentioned. I was slightly distracted during the intercept and overshot the ILS centreline but quickly corrected and established for a good approach. Winds were quite gusty by then (I think 15 knots gusting 25 about 30 degrees off), so I landed with just one stage of flap. I’d like to think I flew this to a good test standard.

Cardiff is due to launch RNAV approaches (down to 250 feet using LPV) mid-October, so it might get a bit more popular with those wanting to fly this type of approach and/or for training. It’s significantly cheaper and more available to GA than Bristol nearby. I was disappointed to read that ADF is mandatory to fly the new RNAV. It’s an issue with strong views on both sides. Fortunately, we do have this fitted so could make use of it.

Aeros Flight School collect the landing fees. Upstairs there is a good cafe which is very popular for Sunday lunch – we only just got a table on the outside verandah. Choice of carvery which was excellent.

Back in the air, the next leg was to Birmingham. There are two highly visible TV masts north of Cardiff – St Hilary and Wenvoe and – both VRPs/exit routes. I had initially booked out to the north but was able to change this to Wenvoe prior to take-off. It can seem daunting to visit a large regional airport like Cardiff or Birmingham but in some ways its easier – you just have to do exactly what you’re told. If you don’t understand or are unsure of anything, just ask for clarification rather than hoping for the best. I’d called ahead to book in with the handler at Birmingham – there are several, but we used Signature – so ATC were expecting us when we first called up. I passed my message as inbound and requested vectors for the ILS. We were sequenced behind two other airliners, vectored downwind and almost to the south east edge of their airspace before being turned in. You can see that vectoring didn’t really start until we were inside controlled airspace with a full Radar Control Service, probably because that was convenient for sequencing behind the other two inbound airliners.

Coventry airport was easily visible ahead on base leg – you only now realise how close it is to the main airport approach track.You can see why they don’t want VFR traffic routing via the Honiley VOR which is so close by. Again quite strong crosswinds  – Birmingham is famous for that – but pretty gusty, reported at 7 gusting 17, so higher at altitude (maybe 35-40 knots). The two windsocks we saw on the ground later showed quite different wind directions and strengths.

It was an easy turn off to the left from where we saw our marshaller who directed us into spot 503. The executive lounge was well stocked with complementary drinks and snacks, with plenty of space to relax while waiting.

A quick phone call to the tower to book out, similar to Gloucester, and we were ready to start. When ready to move, you call for clearance first – VFR departure via Tamworth not above 2000 feet, as we had requested by phone – then taxi to the edge of the GA apron for checks. We had to wait at the hold for several aircraft (maybe 10 minutes) before it was our turn to make an intersection departure and early right turn. With a runway of 3000 metres, almost any intersection would do.

The short flight into Tatenhill was unremarkable. The standard overhead join helped to assess the wind strength and direction. There are some groundworks in progress there which made it a little less obvious where to taxi and park, but when finished should make things much easier. Being a hot day, ice creams were much appreciated. 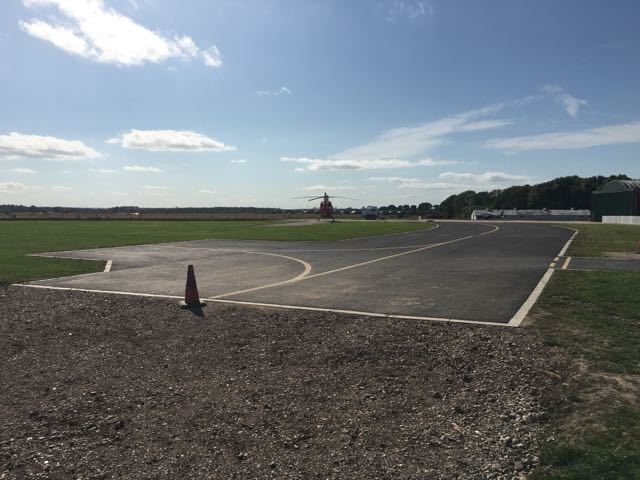 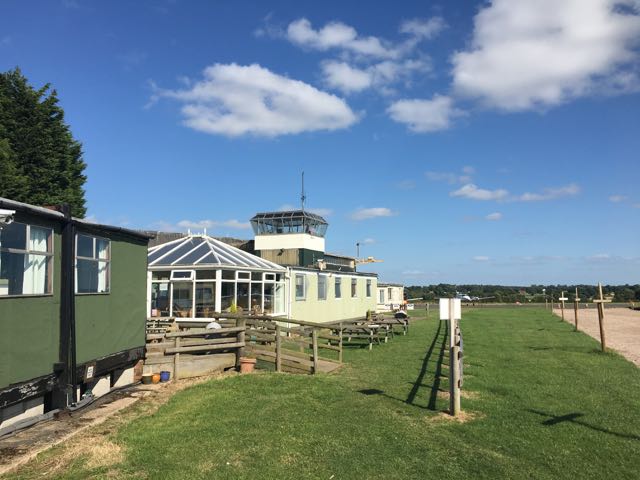 Our last leg was a simple VFR flight back, skirting around Birmingham airspace and flying over Great Malvern to see if we could spot Elizabeth’s new home. A direct VFR right base join for runway 27 was no problem with little traffic around at this time of day.

I’m sure that if the wind had been less strong, we would have seen much more activity at all the GA airfields we visited. The 25 knot demonstrated crosswind limit on the TB20 (which the pilot manual states is achievable by any “average pilot”) certainly increases the scope of weather that remains flyable. I’ve certainly never found I’m running out of rudder authority on final.

All in all, a very enjoyable day out. A bit of a reminder how hard the IR skill test is and a visit to a large regional airport, with the contrast of a small GA field. And with great company.