Several Bristol Aero Club members planned a tour of north west France in August but the dates didn’t work out for everybody. David (another member of the club) booked a PA28 from Kemble and asked me if I’d join him for a couple of days. We planned to decide where to go based on the weather forecast a few days before, and might have headed to Scotland or Ireland had that been better. Fortunately the weather was good for the English Channel and Northern France, so we sketched out an ambitious plan involving four flights a day with two overnight stops. This took in two British Channel Islands, two French Ports of Entry, two French islands and three other French mainland airfields.

The route is shown below, and was pretty much what we flew. The one minor change was to use Cherbourg instead of Caen for our return Port of Entry from France. Cherbourg doesn’t have any PPR/notice while Caen requires notification by 1600 local time on the previous Friday for weekends. Dinard was our outbound Port of Entry, again not requiring notice, and this made tactical changes to the route for weather etc. much easier.

David flew our first leg, keen to practice his IR(R) skills. We departed and climbed above the clouds to FL50 and routed to the west of Bournemouth while aware of the active Danger Areas with military activity offshore. We were unable to contact Plymouth Military to confirm our route was cold. Instead London Information were able to warn us that area EGD026 was active but also arrange and relay a crossing clearance for us. Jersey Zone was ready for us and gave us an early entry clearance into the zone. We requested vectors for the ILS but were told it would be offline due to maintainance (at least the DME part of it). So instead we requested an RNAV which was granted. We had the RNAV on the GNS430 driving the top HSI indicator, with the ILS/DME on box 2 displayed below. As far as I could make out, the ILS/DME was working fine and gave David a glideslope to follow – Jersey’s RNAV doesn’t have any vertical guidance and is LNAV only.

The cafe at Jersey Aeroclub was open and I learnt what a Portuguese bacon roll was.

My short 20 minute flight to Dinard was uneventful, joining right downwind for runway 35. We walked into the (very clearly marked) Douanes office for the immigration formalities, then had to exit landside and return through the special door for pilots, where we were scanned and escorted airside (outside the “restricted area”). The pompiers administer landing fees which are only 7 Euro for a transit stop. They seem to have a difficult and cumbersome computer system to generate the receipts but got there in the end.

No flight plan or booking out procedure for our next leg, a 20 minute VFR flight to St Brieuc. We didn’t talk to anyone on the radio apart from the two towers involved. We saw inside the hangar of the aeroclub there – the pilots only spoke French – who then directed us to the pompier for payment of our “tax” (Landing Fee). Despite being a quiet airport, their NDB instrument approach has been superseded with an RNAV LPV which lit up our Garmin 430W box.

Last leg of the first day was mine, and we flew VFR south and offshore to Belle Ile. It was nice to see Quiberon again, and we had glorious views throughout. I positioned for a very long final, hoping there would be little other traffic around. The AFIS at Belle Ile provided clear airfield information, but reported there was one other aircraft also on final which she initially thought was ahead of me. We clearly reported our distance to the field which is easily read off SkyDemon and the Garmin 430, and this seemed to be very similar. I repositioned for a right downwind join and quickly became visual with the other aircraft, which had been some distance behind me. I’m cautious about the accuracy of distance reports estimated by VFR pilots so always think best to play safe.

Belle Ile Aeroclub was quite busy – they also operate parachute jumping there – but the staff were helpful to telephone several taxi companies to find one for us. We had booked a couple of low cost rooms in town through Booking.com which were ideal for our purposes – very basic but clean and straightforward. My hotel wasn’t quite as computerised as David’s, so they had no record of my booking but gave me a room anyway.

Our hotels were on the main town quay, where the car ferry docks, and so was a hive of activity. There was plenty of choice of restaurants and bars, and I enjoyed some excellent French seafood cuisine in a very pleasant tourist atmosphere.

David’s hotel sorted out a taxi back to the airfield, where we filled up with fuel (they accepted credit card payment). David flew slightly offshore up the coast. Flight Information was very keen to ensure we didn’t plan to fly through Danger Area 112, a sensitive nuclear zone. Our host at Belle Ile Aeroclub had warned us that infringing that zone wouldn’t just be expensive – you could seriously expect to lose your licence.

Unlike my last attempt, Ouessant was clearly visible and we made a straightforward downwind circuit and landing. The tower wasn’t manned, and there was only one other aircraft on frequency which arrived some minutes later. We didn’t hear or see any other traffic during our visit that day.

The other aircraft crew clearly knew the best way around and had arranged for rental bikes to be dropped off a few minutes earlier, so they could cycle around the island. We walked down to the main ferry port (about 20 mins) and enjoyed excellent crepes for lunch. There were plenty of bicycles for hire but little else going on in this small and remote island. 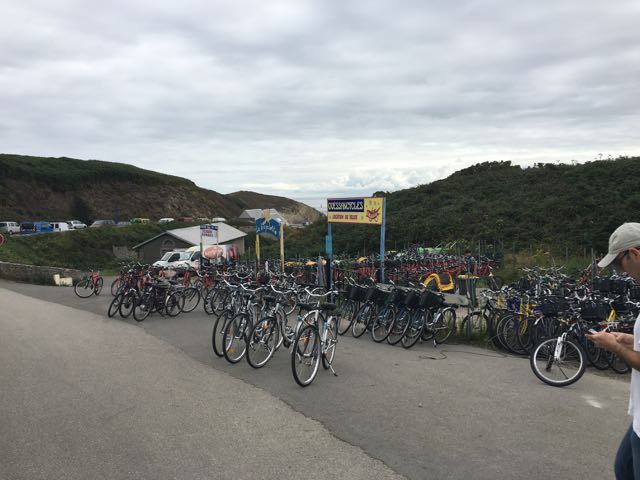 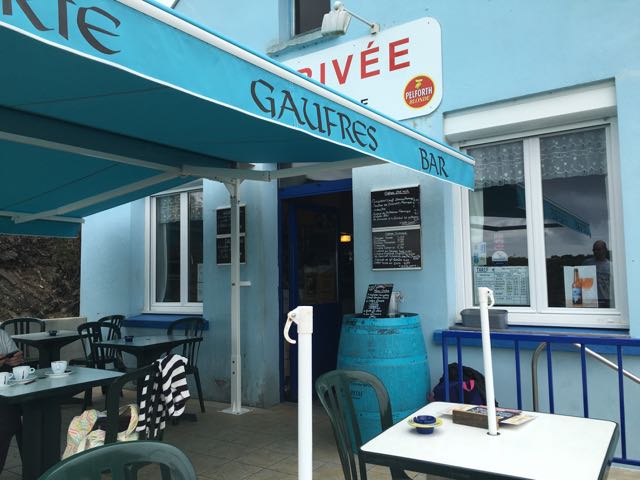 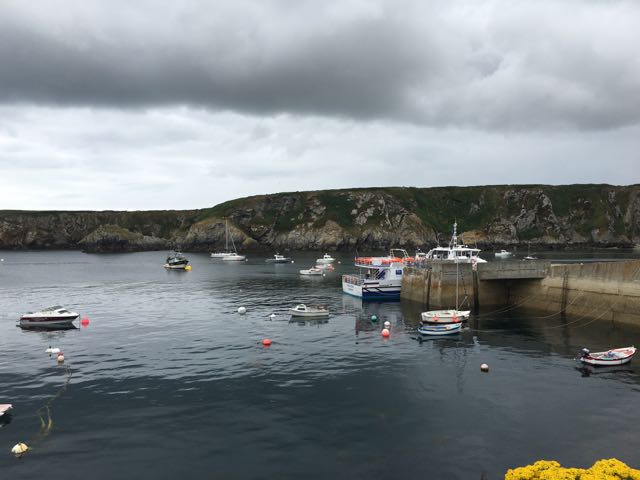 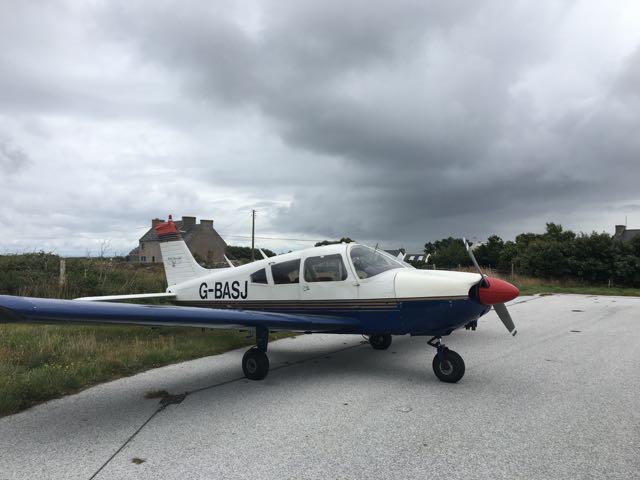 My turn next and we departed back to the mainland around the northern coastline into Morlaix. The photos don’t do the scenery justice – there were glorious views all around. This is a bigger town and coastal resort. The tower wasn’t manned but we found another Aeroclub with someone waiting for their flight. We were made welcome and offered coffee etc. while planning our next leg.

We then turned south and flew another short hop down to Pontivy. Very well maintained airfield, nice hard runway and again with an aeroclub but little else. We heard many gunshots and tried to find the source without success – there must be a shooting range or similar nearby. An Aeroclub member was friendly and welcoming, and confirmed there would be no landing fee.

Last leg of the day was a longer one to Flers. Another hard runway, Aeroclub and large hangar. There’s definitely a theme here. Our hotel choice here was a budget Ibis, on the far side of town. Taxis weren’t available, so this meant quite a long walk through town. Let’s just say it’s not as scenic as some of the coastal tourist towns we’d visited. It was strange to hear that the local Cockpit Bistro Restaurant was closed because it was the holiday season. We did find a chain restaurant and used the hotel Wi-Fi to plan our final day’s travels and file flight plans.

During the short flight to Granville in the morning, we wondered if the cloud base would be too low, but we were OK at 2,000 feet most of the way. We heard parachute dropping commencing just as we approached, so held off and flew large orbits around the city to the south and landed a few minutes later.

What a delightful airfield! Sadly, not directly accessible from the UK because you need to route via a Port of Entry into/out of France. It was fairly busy, partly with tandem parachuting (using a Cessna 172 or similar), partly with visiting aircraft (lots of Jodels and Robins) and partly due to the airfield cafe.

We walked to the beach nearby, almost deserted, and giving a good view of the city to the south. It’s not easy walking distance to Granville itself (about 7km).

Afterwards, we flew north into Cherbourg which is now manned by AFIS rather than ATC. Nonetheless, the information passed was clear and helpful in easily understood English. Only one other French aircraft was approaching at a similar time, and landed after us. The apron was fairly busy and there was a steady flow of traffic, with many Brits using this as their Port of Entry. On landing, AFIS volunteered that our departure flight plan to Guernsey was in place. Sundays meant the cafe was closed, but we were just looking to complete the formalities quickly. We were on the ground for no more than 20 minutes overall.

On departure we were handed over from Cherbourg to area control, then to Jersey control, Guernsey Approach and Guernsey Tower. Our routing took us just north of Sark and we were instructed to fly to the VRP north east Guernsey to keep us clear of the instrument approach track. There were 3 or 4 aircraft inbound at a similar time, both VFR and IFR, which were all sequenced without fuss. We were given a right base join and told to report final, then taxied into ASG who handle small aircraft flights.

After refuelling, we walked around to the main terminal building which I’d not been to before. Upstairs, the cafe has a good view of the airport and offers free Wi-Fi.

With our flight plan filed for 3:30 and a flight time of around 1:30, David was quite keen we left a little early so we could get back to Kemble before closing time. It’s not essential – we have filled in indemnity forms to allow us to land back anytime until sunset – but avoids the need to close flightplans and any out of hours paperwork. VFR flight plans are good for at least 30 minutes either side of the filed time, sometimes more at the discretion of ATC. They can easily be delayed (either online via SkyDemon website or call ATC directly) but not brought forward – you’d have to cancel and refile.

We took off at 3:20 with a departure clearance of VFR not above 2000 feet to the northern zone boundary. North of Alderney, I requested a climb to 5000 feet which was granted by the Jersey Zone controller (according to the SERA rules, I should have asked for 5500 feet, since I was VFR and tracking slightly east, so I climbed to that when out of controlled airspace). We took a Basic Service from Bournemouth when inside their radar range, then a listening squawk from Bristol before returning into Kemble at 4:50pm.

After packing up and completing what seemed like quite extensive paperwork, we were both very satisfied with what we’d accomplished over the past three days. Almost identical block times of around six hours each.

Another milestone passed is that I have met the final remaining criteria for an AOPA Platinum Wings award, having reached 400 hours PIC. You also need:

I’m sure there used to be a fee for issuing a Wings Award certificate, but note these are now free to AOPA members. One direct benefit is free landings at Jersey until at least end 2016 and 50% discount at Guernsey during certain months of the year.