Several club members at Bristol Aeroclub had expressed an interest in sharing a flight to brush up on their IR(R) skills. We’d fly G-BASJ, a PA28 based at Kemble, and on the day agreed a round robin trip to Cardiff, Southampton and Gloucester, making an approach at each.

John flew the first leg and we were fortunate to get a vectored ILS on request into Cardiff which he flew quite safely – he doesn’t seem to have forgotten much from his recent training earlier this year. I sat up front and acted as safety pilot but didn’t really need to do or say much. He had been taught well.

For my leg, I’d suggested flying into Southampton – a new airport for me. It’s had a poor reputation in past years, with commercial aviation taking precedence and the resident flight school closing down about 10 years ago. My research found that GA parking is the key limitation – landings and short stops during daytime are OK, but overnight parking is very expensive. The airfield operations team handle visiting small aircraft directly, but for overnight stays or larger/commercial aircraft then Signature handling must be used. A quick phone call earlier in the day to Operations confirmed PPR and we were good to go.

I flew at FL50 above the clouds en-route and requested a vectored ILS into runway 20. This was granted, sequenced #3 in traffic. We were kept on-track towards the airfield until inside controlled airspace, then vectored north east in a downwind right hand pattern, descending and then intercepting the localiser. It all went pretty well until about 600 feet when I had let the localiser drift sideways to about half scale deflection. Paul, acting as safety pilot, suggested I lookup, and indeed we could see the runway off to the left hand side. This gave me plenty of time to reposition and reconfigure the aircraft for a good landing. My excuse for the poor performance would be that I’m used to flying the TB20 which is easier and more stable in an approach. We often hear that currency is key in IFR flying and I’d agree that’s true not just for pilot but for the aircraft type.

On the ground at Southampton

We were directed to the north west end of the airfield, past the tower and Signature Handling, and marshalled into a spot alongside another small GA plane. There isn’t much free apron space at that part of the airport although there seems plenty allocated but unused in front of other hangars. Our marshaller then drove us a short way to the main vehicle gate, where we could walk 400 metres to the main terminal. The airport is well served by a train station, so this could be a good place to pickup/drop off passengers. Much of the local GA activity has moved to Lee-on-Solent which is thriving, and Goodwood isn’t too far away either, but these won’t be as convenient or accessible for some.

Departure involved phoning Ops, who drove to the gate to pick us up and deliver us to our aircraft. There was no need to go through a security scanner check, since we were escorted throughout. I was pleasantly surprised to find we could pay our landing fee by card in the Ops vehicle, who also booked us out with ATC and then waited to marshall us across the airside roadway when taxiing out. Great service and no more expensive  than some other south coast airfields I could think of, with free parking up to 2 hours. The big bonus is that they do have instrument approaches if required. They only have an ILS at one end and in my view would benefit from a precision approach on 02 – there is published planned date for LPV at both ends by December 2016, so we can only hope these will be approved in the not too distant future.

Paul had hoped to fly an instrument approach into Gloucester, but we were running short of time and couldn’t land. He did phone up to enquire if he could be fitted in, but this would be treated as a training flight and so wasn’t possible due to other bookings.

At least he got Southampton in his log book.

There isn’t a full length taxiway for runway 20, so we had to enter midpoint (where we exited after landing) and backtrack as required. We were given an early right turn on track after take-off on Runway 20, giving us great views of Southampton and the surrounding area. Paul said he still found the day useful, and both John and Paul have arranged another weekday to share an IR(R) practice flight in the near future. 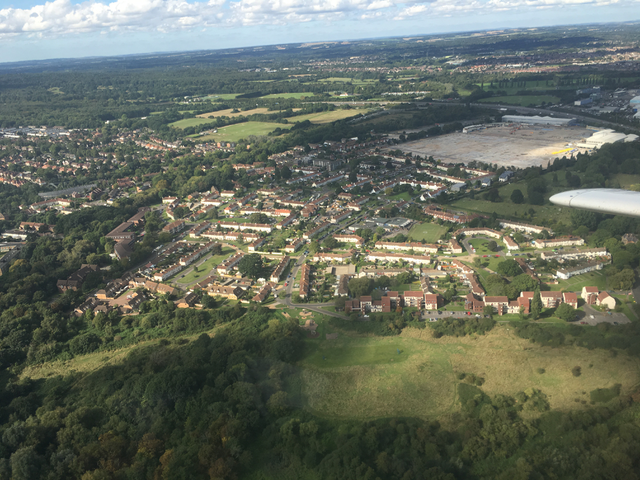