I’d been trying to fly some friends to the Scillies for a weekend this year, but had two failed attempts due to really bad weather. This third attempt looked very promising, but again there were 50 knot winds forecast for the Sunday. At the last minute, we were able to reschedule and fly out on Friday afternoon, returning Saturday. Our two friends who were keen to join us had arranged accommodation which fortunately could be changed (there is a scarcity of hotel rooms on the island). I drove up earlier to refuel and prepare the aircraft, so we were ready for a quick getaway when they arrived around 3:30. The latest movements at Scillies are 6pm, and an airborne flight time of 1:30 didn’t leave a huge amount of leeway. We took off from Gloucester at 4pm and landed at 5:30.

My planned route was VFR and took in the east side of the Bristol Channel to allow passengers a good view of Bristol and Avonmouth. Easterly winds meant a departure on runway 04, and I flew just below cloud level at around 3000 feet, dropping back down to 1400 feet for the good views and the simplicity of keeping outside controlled airspace.

The flight was uneventful and in a straight line. The co-ordination of the traffic corridor between Land’s End and Scillies is still managed on a procedural basis, with pilots reporting their positions and altitudes. We were joined by a commercial Twin Otter from Newquay below us, who advised he would overtake us – my calculation was that we’d arrive about 1 minute behind him, so I slowed down to ensure good traffic spacing. Scillies were on runway 14 for the Eastern Wind (from approx 110), which as a notable hump and downslope, so I wanted to ensure we were at the right speed and landed as early as possible. In the event it was pretty straightforward and there was plenty of runway left.

We walked the mile or so into town and our hotel, very pleasant and relaxed – we had packed light to remain within weight limits – and then enjoyed a good dinner. Unfortunately one of my passengers suffered from food poisoning overnight and didn’t appear the next morning. My wife and I spent the day visiting Tresco, a 20 minute ferry ride away, and on our return mid afternoon our friend was fit enough to walk back to the airport and join us for the flight home. 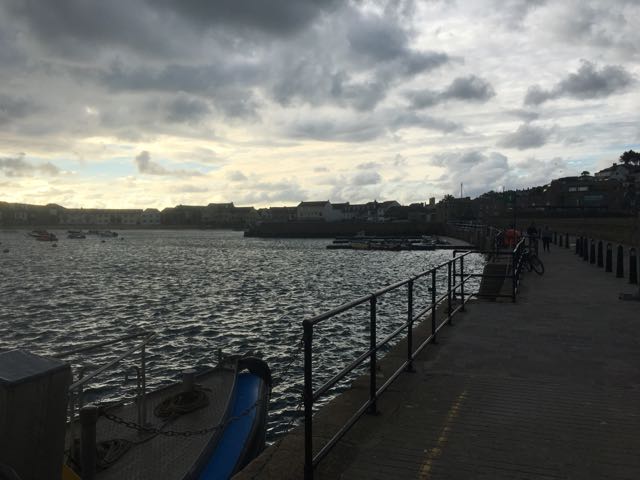 I got a pleasant surprise when paying the landing fees in the tower – the prices have gone down since my last visit and are calculated based on aircraft weight, and are similar to Gloucester. Parking on the grass is free after the first week! GPS Instrument approaches going through the approval process and should be available next year (currently there is a timed NDB only).

We had a choice of take-off runways (09 or 14), with wind 110/17. I opted for 14 since it’s longer and downsloping, and we were indeed airborne in no time. The direct routing home was again no problem. I struggled to work out what the cloudbase was doing as we approached Minehead, and thought I’d duck down low again have a low-level view of Avonmouth. Cardiff indicated I would likely be granted a transit, so I asked for “not above 3000 or 4000 VFR” and was given not above 4000 VFR on-track Clevedon. Given that this would be directly across the inbound routing for Bristol 09, I was pleasantly surprised to be given that. My readback failed miserably because a passenger distracted me but the controller reconfirmed it. After handover to Bristol, I was then cleared with the same generous height constraints ontrack Gloucester.

It can be difficult to estimate what the cloud levels are doing and what to ask for (because you still have to remain clear of them with a VFR transit clearance), but the flexibility of a not-above 4000 is about as good as you can get.

With darkness approaching (about 20 minutes later), there were very few other aircraft around. Gloucester cleared us for a right base join into 09 but instead joined about 4 or 5 miles out, allowing me to give the bird sanctuary a wide berth and also simplifying the final approach. The controller asked if I’d like the lights turned down a bit (to avoid dazzle) and this did make a difference.

After putting the aircraft away, including updating the GTN navigation database and downloading engine management data, we enjoyed a well cooked dinner in Aviator before making our way home.

This trip could have been made with a PPL (or LAPL) licence, since it was VFR. Scillies Airport is now all tarmac runways, is open to GA, has reduced landing/parking fees and isn’t quite as scary as it looks. Just remember it has no fuel, requires PPR and is only open Monday to Saturday (plus on Sunday afternoons for un-manned departures with prior permission). Accommodation is difficult to arrange at short notice during the peak season and is quite pricey, so a day trip may be a better idea. ATC are kept quite busy in this active commercial airport, but were able to provide plenty of friendly advice by phone when I called for PPR.