The Bristol Aero Club regularly schedules a long weekend August flyout to Northern France. This year they again chose to base themselves in Quiberon for two nights, where I’d spent a week’s summer holiday before. There would be seven pilots in four aircraft, comprising 2 club Warriors, my TB20 and one member who had built his own tail wheel SONEX.

We met up in the pub beforehand to plan out the route, refresh memories on filing flight plans and GAR forms etc. We decided to route both outbound and return via Jersey and Dinard, but left planning for the one day local flight from Quiberon to be decided when we got there. Deb, one of the club instructors, joined me in the TB20.

Since I hadn’t done an airways flight for a little while, I filed IFR and took the slightly longer routing at FL90. This was pretty straightforward having done it before, but you do need to keep a very careful ear out on the radio, responding crisply and efficiently.

My clearance on the ground was to join controlled airspace level at FL90 via WOTAN, so I flew north and returned overhead at 4000 feet to give me enough distance to reach that in time. Handed over the London at FL50, I was quickly recleared to join ontrack MALBY in the climb. Often this is expedited, but sometimes not and you can’t rely on it – it will depend on traffic conditions at the time.

We were fairly quickly put onto headings and vectored via a short cut towards Southampton. I’d estimate about 50% of the flight in southern England controlled airspace uses headings, especially when anywhere near London. It allows ATC to reduce separation and fit more traffic in. We heard but didn’t see anyone close by.

London passed us to Southampton Radar for a period, then back to London Control and on to Jersey Control. We were given vectors for the ILS without asking which was useful with a broken cloud layer and some clouds directly as we turned final. I let the autopilot take most of the strain down to about 300 feet, then manually landed and parked up at the Aero Club ready to refuel at their attractive low prices below £1/litre. (Even lower with AOPA member discount).

It was fairly busy there. They’ve revamped the upstairs office area adjacent to the cafe which is now more self contained. Sandwiches for lunch while we waited for the other aircraft to join us. It was particularly welcoming to see the SONEX arrive after its maiden voyage over the channel. Some German pilots sitting at the next table spotted it as it landed, saying they’d seen a similar model at OshKosh the previous week. The owner John likes to avoid flying through rain showers though – apparently getting the wooden prop wet doesn’t do it any good for the long term.

We had a very quick VFR hop across to Dinard and I was lucky to get a straight in to Runway 17. The runway direction then changed and others had to hold and join downwind making for much longer flight for them.

We then considered the weather situation which wasn’t looking great for VFR. In the end, we delayed there for several hours, watching a Ryanair flight arrive and depart, before heading west departing fairly close together. John decided to join us in the TB20 rather than fly his SONEX. I guess he didn’t want it to get too wet.

This was perhaps marginal VFR but it was possible to keep the ground in view at all times. There were plenty of wind farms – where before they could be used as navigation points, nowadays there are so many they become indistinct.

We had emailed ahead to Quiberon in the afternoon to advise them of our late arrival after hours. So it was a surprise when I called up and got a reply when five minutes out. There was no other traffic around and we approached from the sea onto runway 29. The others weren’t too far behind. The FISO had stayed on purely for our benefit – what excellent service.

Our hotel was near the centre of town and arriving so late we ended up eating there – a good choice with an excellent range of food. Probably too much if I’m honest!

Another club pilot had flown into La Baule a few days earlier and recommended it. It’s only about 20 minutes or so flying time south, just across the bay. We all thought that a great idea, and set off. The airfield also has AFIS, so there was English speaking response on the radio where we joined directly downwind to land. Parking was a bit of a problem because there was an airshow/exhibition on. While we sat drinking coffee, we saw a Sea Fury flying a display overhead with smoke from both wingtips. After landing, we spoke to the pilots who explained that the large quantities of oil splashed down both sides was perfectly normal. One of our club members was alert enough to spot from the sound that it wasn’t the same Merlin engine that you’d normally find in a British version of the aircraft.

A long stroll down to the beach and back was rewarded by an ice cream. It’s quite a large beach resort with a huge expanse of sand.

Our return intended to land briefly at Belle Isle, which I’d also visited on a previous trip. I was first in and informed of quite strong winds – gusting 25 knots from the south west. As I turned final, that became gusting 27 knots from the north west. I continued but with a mindset that this was very unlikely to result in a landing. After a fairly bumpy approach and float along the runway, I did the sensible thing and went around.

The others heard my attempt on the radio and decided to head back to Quiberon. Like bees to the honeypot, there suddenly seemed to be about six aircraft all doing the same thing. The FISO asked for position information so we were all aware of each other, and it was good VFR conditions to do so. I ended up circling to the east of the circuit for a little while, joining downwind after the other two aircraft and landing last.

Definitely time for a beer at the clubhouse and watch the active parachuting on the field.

We retraced our steps for the return journey, via Dinard and Jersey. One of the PA28s was due for its Annual, so it seemed practical to drop this off at Henstridge for maintenance. I could then fly four-up back to Gloucester. We all put our bags into the other PA28 to help reduce weight for that final leg. 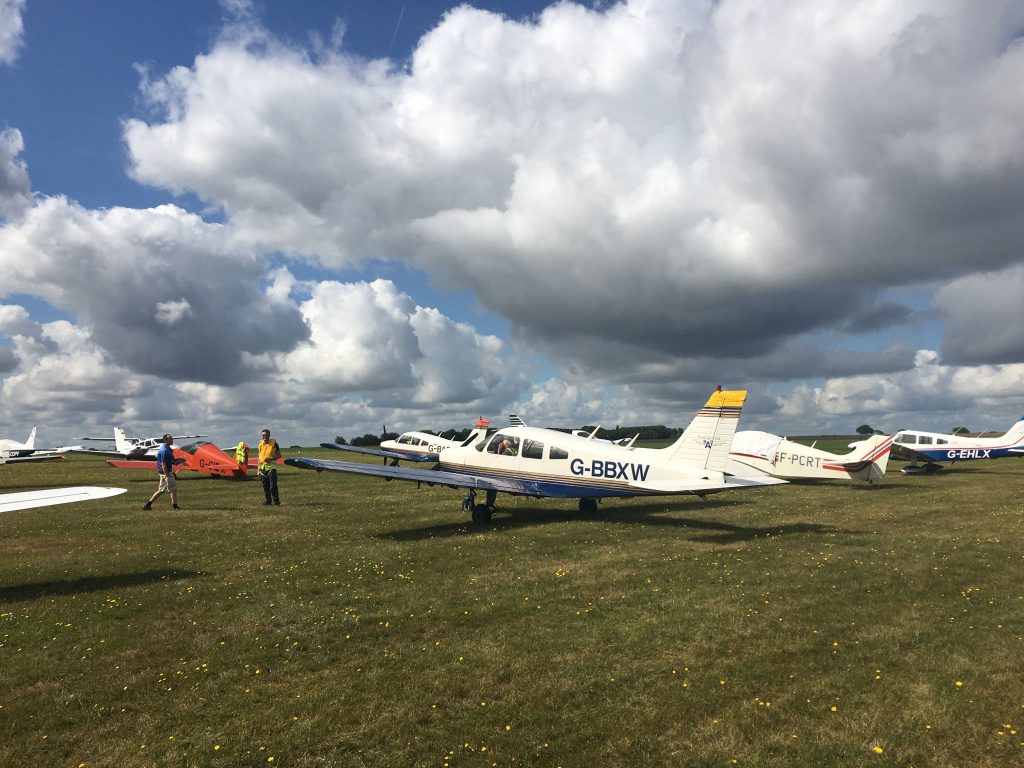 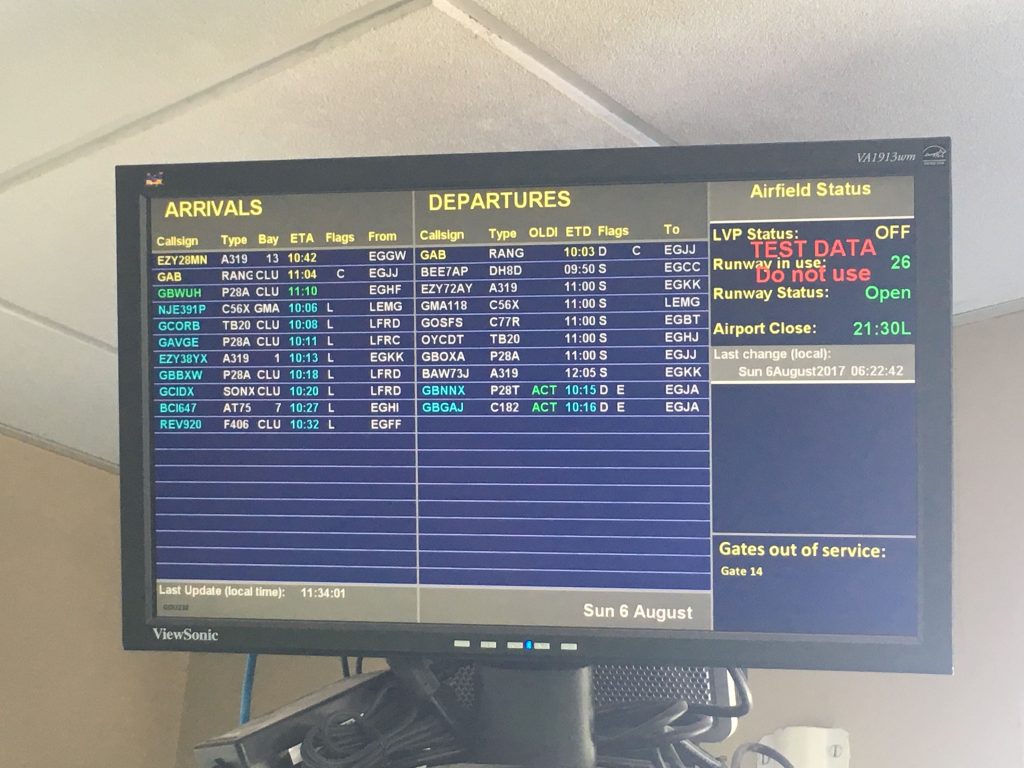 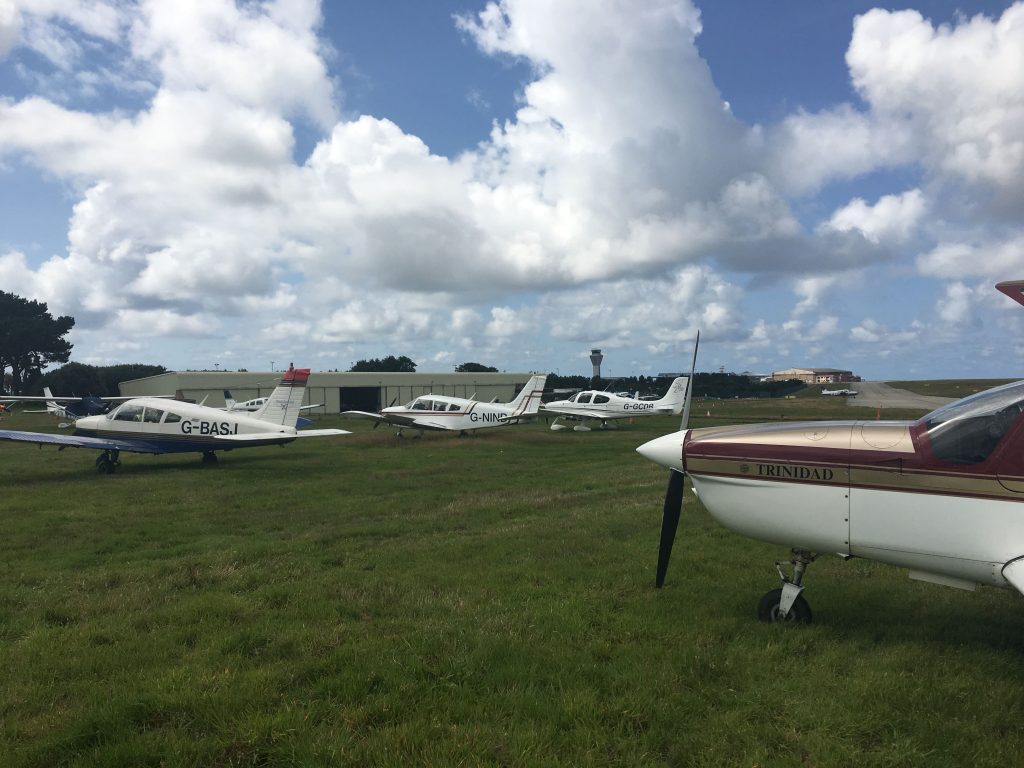 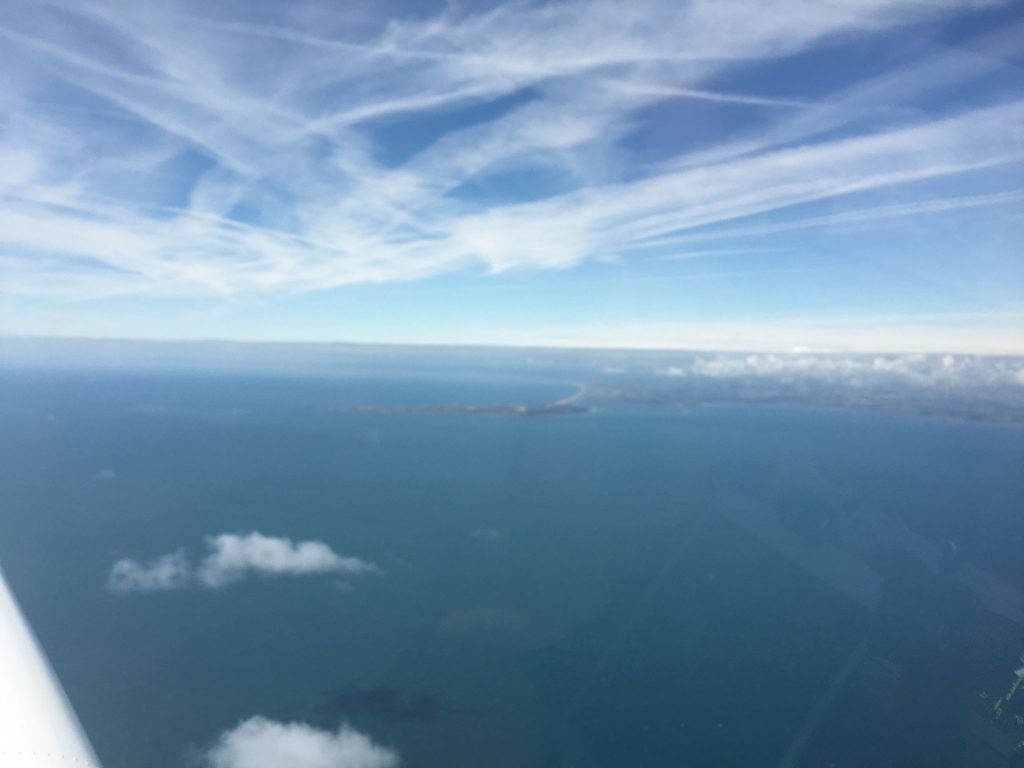 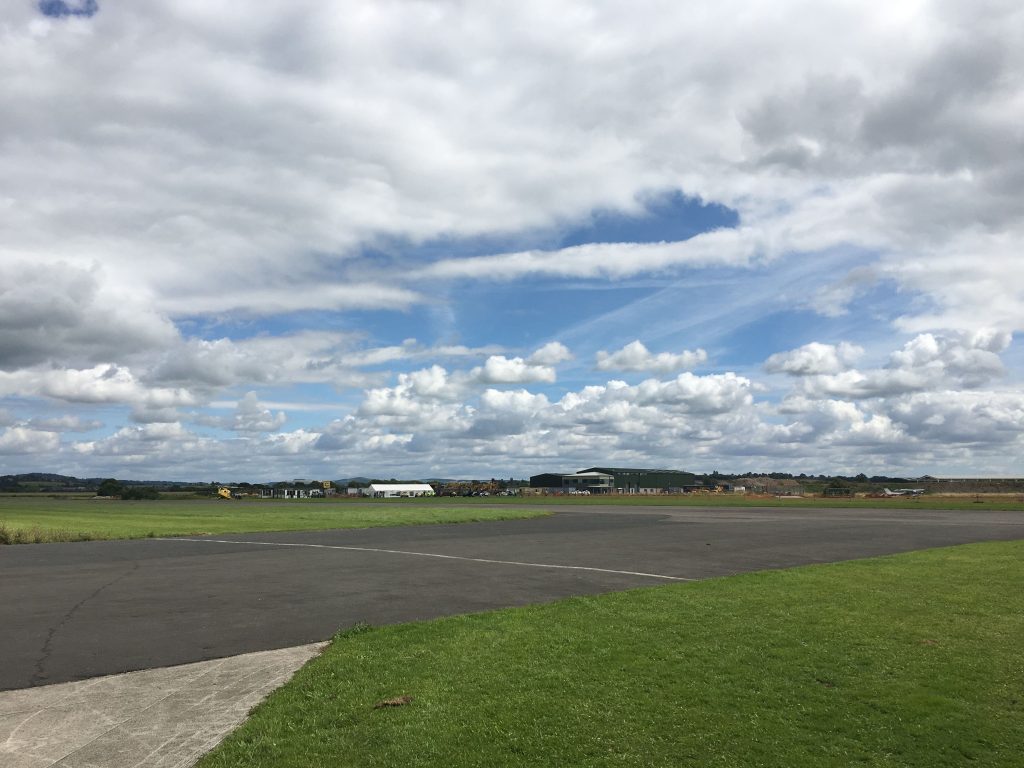 It’s been a while since I’ve visited Henstridge and they were very welcoming on the phone. Although we’d filed flight plans and GAR forms, they just needed brief details for their records when I called in advance. They had the Air Ambulance on display and plenty of visitors that day. A quick cup of tea and we were back on our way home.

Four up meant taking quite a lot of runway (775m) but we climbed away and flew back at around 150 knots groundspeed. We reported inbound to Gloucester at a similar time (and place) as a Cessna, so our eyes were on stalks to see if we could spot it. Just as we did, Gloucester asked us if we were 3 miles out – we were 5 miles and saw them ahead.

Some great flow control from Gloucester Tower directed the Cessna to make a standard overhead approach while giving us a crosswind join, allowing us to quickly complete our circuit and land well before them.

Everyone who went on the trip thoroughly enjoyed it. A combination of varied VFR flying, foreign destinations, sunshine and great company. It’s what getting a PPL is all about!