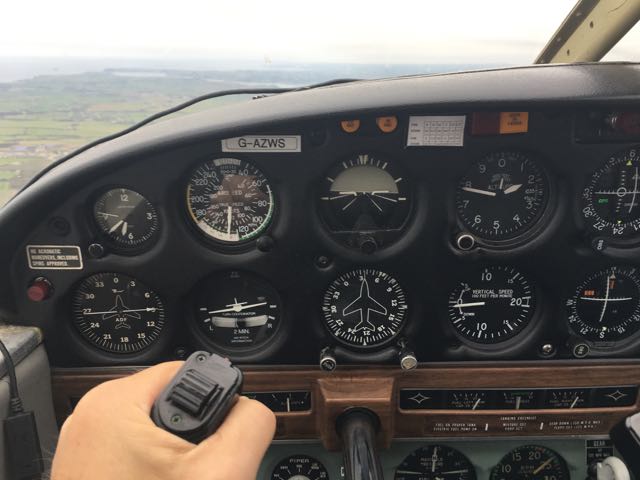 One step at a time

While what I’ve described below is the practical EASA flight instructor course, it is just one step towards my bigger goal – to become qualified to instruct for private instrument flying, which would include privileges for:

This would all be for Single Engine Piston (SEP) only.

Since I am already Instrument Rated with over 200 hours IFR logged, the requirements are:

a) Qualify as an IRI (Instrument Rating Instructor). This requires:

b) Qualify as an FI/IR (Flight Instructor with Instrument Rating privileges). This requires:

Since it would take me about 10 years (at huge cost) to achieve 800 hours IFR experience flying privately, it has to be option (b). The full FI qualification provides a more thorough foundation for any flight instructor and will also allow me to conduct ab-initio flight instruction including trial lessons. Since I already have a CRI (Class Rating Instructor), I could already instruct anyone who has or has ever had a pilot licence for VFR.

I chose On-Track for the FI Course. I had already used them to gain my CRI and felt their nurturing approach suited me well. Their FIC instructors are all extremely experienced and competent – they do this because they enjoy it rather than as a route to any future career or for a big salary. There are certainly other good schools with well known and highly respected instructors around the country to choose from, but few within easy commuting distance. While it did mean I’d need to stay away overnight during the training, that also encouraged me to focus on it.

Typically an instructor course would be conducted intensively, Monday to Friday and last around six to eight weeks. I chose to do this in chunks of two weeks on, two weeks off starting in November. This freed up time in between to catch up on business and be at home. The weather was somewhat worse than hoped for, and delayed progress somewhat, but let me complete in exactly 30 days/6 weeks including one day for the test over an elapsed period of 13 weeks. The quickest students have completed in five weeks, so it didn’t make a huge difference. It would have been better to have calmer weather for some of the training – practicing instruction for straight and level in a 30 knot turbulent wind was a bit tricky.

The first day involves a pre-course assessment to determine if you are good enough to start the course. Not everybody who applies will pass – your flying does have to be up to a certain standard – and although perfection isn’t required it may be worthwhile practicing beforehand. I had taken a refresher lesson on PFLs the week before so was quite well prepared for that, although I could have done better with my field selection on the day.

There’s quite a bit of ground school involved. As a CRI, I didn’t need to repeat the three days of Teaching and Learning. There have been quite a few changes to the regulations and I was drilled in the latest EASA mandates – it’s more about knowing where to lookup/find the rules rather than learning by rote. I’m fairly well up on current regulations which pleasantly surprised my instructors. But there are always quirks new to me. For example, did you know that an EASA PPL with EASA LAPL Medical isn’t a valid combination? To be legal you’d have to get the CAA to reissue/downgrade your licence to a LAPL or upgrade to a Class 2 medical.

There are also three “long briefs” to be given, presentations of about 30-40 minutes on a particular topic. These are intended to emphasise classroom teaching scenarios, spotting which students might be falling asleep/playing with their smartphones, and pouncing on them with direct questions. Clearly you have to know your subject, but for those who have less experience as a presenter it could be more daunting. My topics included Slow Flight and Pressure Instruments, which are fairly common. Having presented in my professional career, I didn’t find this bit too challenging but some worthwhile feedback helped improve my technique.

Most of the course involves working through the PPL course syllabus with focus on the early lessons. The FIC Instructor will “give” a lesson, including a full pre-flight briefing and the flight itself. The student then “gives back” the same lesson, including the briefing and flight. A good day would involve two flights, one give and one giveback. Repeat 20 times and you’ll be just about done. You are being taught how to teach rather than how to fly, although inevitably your basic flying skills will improve. There isn’t enough time to include all of the PPL syllabus. Navigation in particular was constrained to just one day, although I did have to demonstrate familiarity with the whiz-wheel and plot lines on the chart.

We went through the very early lessons in great detail and I confess I had forgotten (if I ever full appreciated) their contents. The effects of controls might seem pretty obvious to a more experienced pilot but even teaching clearly how each of the elevator, ailerons and rudder react at different speeds and power levels (including slipstream) takes some skill. We spent a lot of time on climbing, descending, stalls and PFLs. You start to see how all these exercises build up and prepare students for circuit work – if they aren’t understood thoroughly then progress at later stages will suffer.

Landing technique didn’t seem to take up too much time – I’m fairly confident about crosswind landings, and some of our lessons were conducted in quite challenging conditions. I now appreciate that trying to achieve a greaser on every landing isn’t what is looked for with new students. Positive landings are encouraged, touching down where you want rather than drifting off or taking up a lot of extra runway.

One thing missing from the official syllabus was almost any mention of GPS. I think most instructors would include a brief introduction to any GPS kit fitted to training aircraft. I’ve typically demonstrated how to setup a “Direct-To” on a Garmin 430 for example, and I expect many would give some guidance on tablet apps such as SkyDemon. Today’s PPL skill test specifically requires navigation by dead-reckoning using stopwatch, plog and visual references (but not feature crawling), so that’s what the PPL training course focusses on. I was referred to a document from the Guild of Air Pilots which describes good techniques for PPL navigation instruction, and that subsequently refers to another one from the RIN (Royal Institute of Navigation) regarding GPS for PPLs.

Bearing in mind that on average one UK instructor infringes controlled airspace every week, I do wonder whether it’s about time that the capabilities of GPS apps were emphasised more and training not just limited on the traditional methods. The PPL syllabus itself does now include some GPS content, but the section for it in EASA Part-FCL is minimal. Exercise 18(c) only includes selection of waypoints, to/from indication and error messages. Both methods have their benefits and limitations. Most  of the qualified pilots I know of make full use of a tablet App for cross country flights and I see that the SatNav has now become a staple element of the road driving test.

As you progress through the course, the completion spreadsheet fills up and each of the lessons is marked up with dates for the give and giveback. 30 hours flight instruction is mandatory and usually more than enough to cover the syllabus, leaving time for refresher flights and mock tests before the Assessment of Competence itself. Up to 5 hours can be mutual flying with another FI student. I only managed to fit one such flight in but did find it useful – making it more like a real lesson albeit with a very capable and competent student.

I also squeezed in an hour’s night flying which allows me to instruct for the night rating, again a pretty windy day so probably not realistic for a first time night instruction.

Overall, I took almost seven weeks spread between November and February, flying 30 hours on the course plus about 1.5 hours on each of the pre-course assessment and post-course Assessments of Competence. The test (Assessment of Competence) took pretty much a full day and included a short brief, training exercises in flight of 90 minutes, debrief, long briefing and a grilling on each topic of PPL theory, plus an overall debrief to me of the day. Once I had been told I’d passed (big relief), it then took about an hour to fill in all the paperwork. This included a certificate issued by the examiner allowing me to instruct immediately. I then have eight weeks to process the paperwork with the CAA and promptly sent off 44 pages plus logbook by Special Delivery.

The FI(A) rating is valid for 3 years and must be revalidated every other time by an Assessment of Competence involving a flight test. My first revalidation can be done by experience if I have instructed 50 hours and also attended an FI refresher seminar.

A huge thanks to the dedicated and enthusiastic instructors at OnTrack for their encouragement, adapting and working around the weather and logistics. I have no hesitation in thoroughly recommending them for any EASA instructor or examiner course.

I’ve separately posted about Spinning and will soon about the CPL theory exams which were studied for during the same period.

Another option would have been to go abroad to do this course. Prices are cheaper in Eastern Europe while Spain offers more reliable and consistent weather. Both provide the same EASA rating recognised throughout Europe. I can’t comment on the standard of instruction or suitability of any foreign ATO.

Some may believe that the FAA scheme is more accessible and appropriate level. I’d point out that you need to have both CPL and IR ratings before you can even start an FI course there. Duration can be similar – this FAA FI course takes as long (30 days) but makes more use of a simulator and requires as little as 10 hours dual flight instruction. If you self-study the groundschool in advance, this CFI  flight academy reckons you can do it in just 3 weeks. However the skill test itself is very challenging, done by an FAA staff examiner (albeit free of charge).

Once approved, you never need to see an examiner ever again – just participate in an online course (mainly about updated regulations) every couple of years. There is no restricted or supervised period and you don’t have to work through a flight school. You can even instruct for FI ratings once you’ve gained enough experience without needing to go through further training. Quite a different approach.