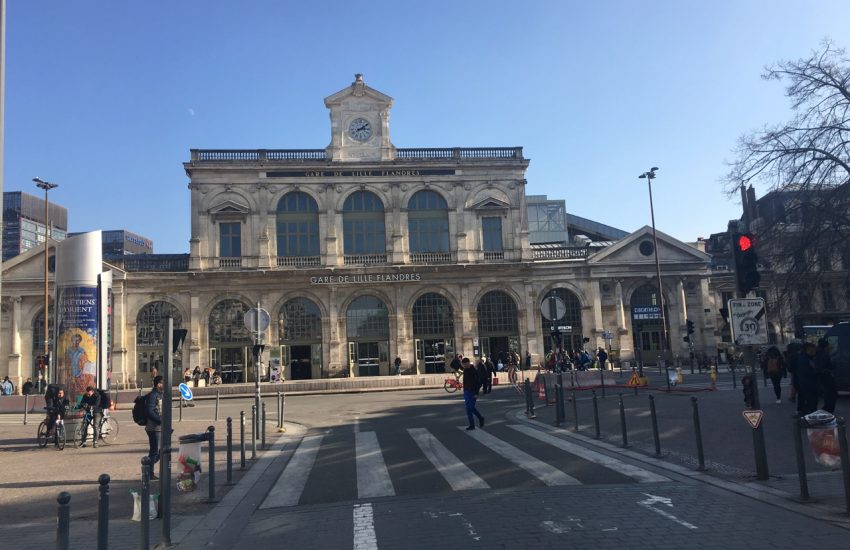 The idea of flying to France for lunch remains attractive, even if I have done this a few times now. Making this into an airways flight (almost) over London is even better. Adam (who recently passed his IR Skill Test) shared a flight with me in the TB20 from Gloucester to Lille – his first international airways flight – and enjoyed the experience. I was a bit rusty, having spent most of the past few months flying VFR low level as part of my Flight Instructor course. So it made a nice change.

Aircraft documents checked, passports packed, flight plans filed, destination airport arrangements checked, GAR form submitted to Border Force, lifejackets on and liferaft in the back seat. I have a checklist for foreign trips and there’s always something you could have overlooked.

Our flight plan was calculated using Autorouter, which came up with

Decoding this, it means after departing Gloucester (EGBJ) we would cruise at a nominal true airspeed of 151 knots at Flight Level 90 (approx 9000 feet) to airways waypoint MALBY (very close to Malmesbury) then at Flight Level 100 along airway L9 to DVR (Dover). This would route us directly over the London TMA which frankly at that altitude was very unlikely.

From Dover, we would be routed along airway L10 to waypoiint RINTI then to waypoint TRACA and fly the TRACA5A STAR (Standard Arrival Route). The actual route you end up flying is often quite different, especially over South East England, but today wasn’t too far off.

After entering controlled airspace at MALBY and being given a “direct to” CPT (Compton), we were then given radar heading to follow. This allows the controllers to pack more aircraft movements into the same 3D airspace around London. It means you have to stay alert for every instruction and quickly respond if it’s for you – such as a turn right 10 degrees, change frequency and report heading to the next sector on xxx.yyy or just keep going as before. Clearly the autopilot really helps by taking the strain for this type of journey.

After some time on headings, we were given a direct-to RINTI and ended up routing slightly north of Gatwick, so not nearly as far off track as I might have expected. No doubt the clear skies and better weather were a factor – reducing delays on the ground or for weather avoidance.

Belgian ATC were easy to understand and the easterly wind meant that our track easily intercepted the ILS and made for a simple straight-in landing.

Clearing immigration and into the town centre for lunch

Once parked up on the large GA apron with only a couple of other aircraft present, a minibus came out to ferry us to the main terminal, and we were escorted through passport control. We could pay our landing fees at the main terminal information desk and schedule our own departure time.

We just missed the bus service into town so took a taxi and soon found ourselves walking around the busy city centre. Lunch in a very pleasant brasserie was definitely a notch up on your typical UK airfield cafe.

Traffic back to the airport in the late afternoon was intense, and our taxi driver took quite a few shortcuts to save time. We ended up walking the last few hundred yards or so due to completely stationary traffic. A tip would be to avoid peak traffic hours if possible.

I’d filed a flight plan for our return and also submitted the GAR form, but I got a call from our local Border Force team who hadn’t received it. I was able to resend from my phone and save everybody the trouble of “a deployment” (i.e. where they drive out to meet you on arrival and check your paperwork). The online GAR systems generally work really well (I would dare to say better than the French system of email notifications) and Border Force do spot if GAR forms and flight plans don’t correlate.

The routing calculated for our flight plan back wasn’t the same as the outbound leg:

On calling for start, Ground immediately give you your departure clearance which if you aren’t ready with pen/pencil in hand can catch you out. We were asked if we were PBN equipped – our flight plan stated that we were but I suppose they do this to double check the pilot is familiar with PBN procedures too. When I confirmed, we were given the SID (Standard Instrument Departure) RWY 08 TRACA 6R and also cleared to start up. While the engine was warming up, I was able to study the SID which was fairly straight forward – turn right at 550 feet after take off and head for a waypoint then turn right again. I loaded this into the flightplan on the GTN650 – it automatically inserts that before the en-route waypoints and I even loaded my preferred RNAV approach back into Gloucester. 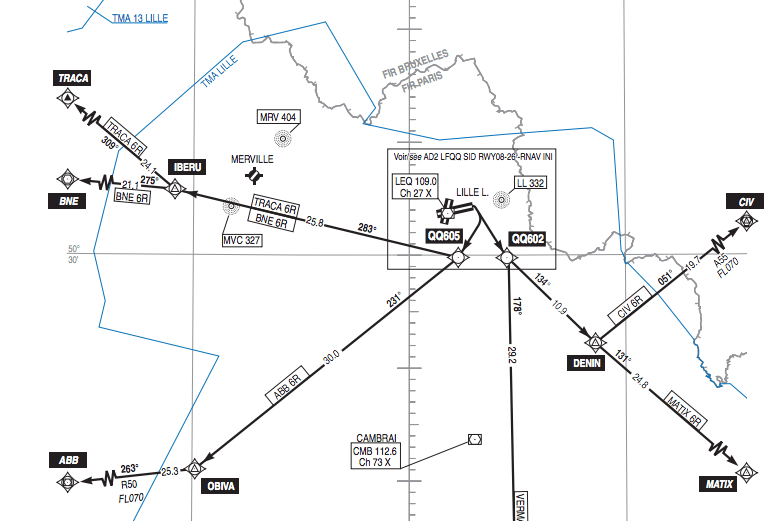 After take-off and making the right turn, I was quickly told to “remain on current heading” by approach, which I thought might just be to keep me out of the way of other incoming traffic. Shortly afterward though, Belgian ATC turned us west towards RATUK (near Le Touquet), considerably south of our planned course. It looked like London had decided to keep us well out of the way south of Gatwick. Once over the FIR boundary, this was confirmed and the controller told us to expect to be routed via Goodwood. We could hear that quite a few airliners were having to hold before landing which was keeping ATC very busy.

We were routed north from Goodwood up to Compton, and once heading west towards Gloucester I asked if we could route directly to the RNAV IAF (Initial Approach Fix) at SOSAB. Once I gave a little explanation of exactly where this was,  the sector controller approved it. That made it very easy on handover to Gloucester who cleared us for the RNAV approach. The circuit was quite active with students on their Night Rating training, but we were easily sequenced in and landed without fuss.

The sun had set during the latter stages of the flight and was quite dark on arrival. Fortunately one of the benefits of an EASA Instrument Rating is that you don’t have to have made a recent night takeoff and landing to be current for night flights with passengers.

A great day out and an enjoyable change from the intense flight instruction training I’ve had in recent months. It also knocked off a fair bit of rust and I hope it won’t be too long before I can schedule another airways flight or two.

Adam has also written a post about this flight on his blog.