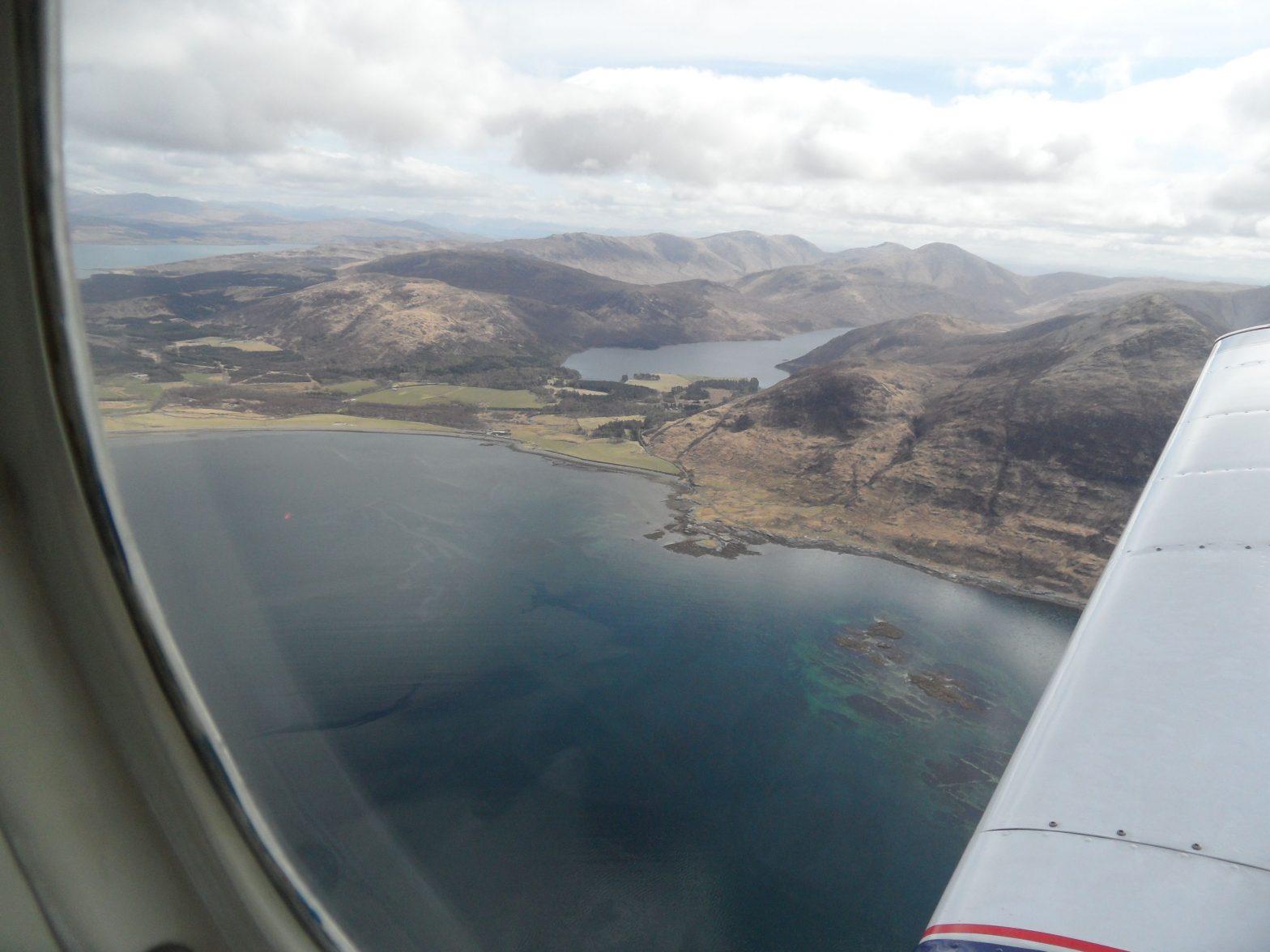 I’d booked our TB20 G-CORB for the long bank holiday weekend, blocking off Friday through Monday for a trip with my wife up to Aberdeen to see my relatives. We wanted to stop off somewhere for Friday night so I took the opportunity to visit somewhere that’s been on my bucket list for a while. 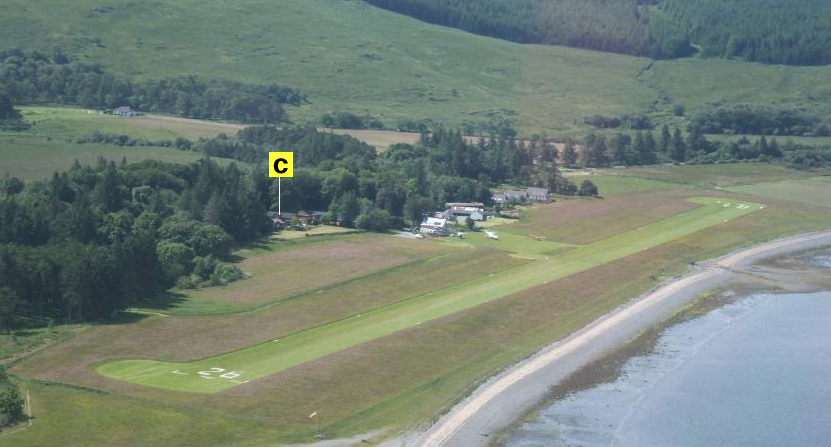 Glenforsa is a grass airstrip on the Scottish island of Mull with a hotel adjacent. In recent years, the hotel owners have taken over management of the airstrip (from the local council) and invested in several improvements. Brendan and Allison, the owners, are both aviation enthusiasts having managed airfields professionally at Perth and previously been based at North Weald.

Weather is the critical factor for any trip to north west Scotland, where it can change dramatically in the course of a day. There aren’t many convenient alternates, with Oban only a few minutes away so often suffering from similar weather conditions. Perth, Prestwick or Cumbernauld are the most likely mainland GA airfields in reach, but several island airports are also nearby. PPR and a lot of pre-planning is essential.

The hotel itself is popular with non-aviation tourists and being so remote has to have a fairly tight cancellation policy (no refunds after 7 days prior), so you have to take a bit of a gamble with the weather or availability. There are other hotels in the area should it be full, but few that are as convenient.

A phone call to Brendan beforehand clarified that the strip is now much less waterlogged than before (he has installed drainage over 300m of it, and narrowed it to 12m to avoid the squishy bits). Low cloudbase was more likely to be the limiting factor, but the weather forecast on the day looked promising.

This flight had everything in it from an airways element at FL100 to a cloudbreak in uncontrolled airspace. Although I thought I’d prepared fairly thoroughly, it had been a busy week and my first call to ATC identified the first problem. I’d flown another aircraft a few days earlier and had submitted today’s flightplan with the wrong aircraft registration. That’s not something that can easily be fixed by ATC. So a quick few taps on the laptop connected via mobile phone cancelled that one and submitted a new one. In my haste, I was too quick because I got the departure time wrong, but that was something that ATC could help me with.

The route filed routed via airways but this meant more time over the water, tracking out over the Isle of Man. Since Glenforsa airfield doesn’t have an ICAO airport code, ZZZZ is entered and a comment section specifies the final destination. BRUCE is a nearby waypoint just to the south east. It’s surprisingly little extra overhead on the distance – 341M instead of 324M. 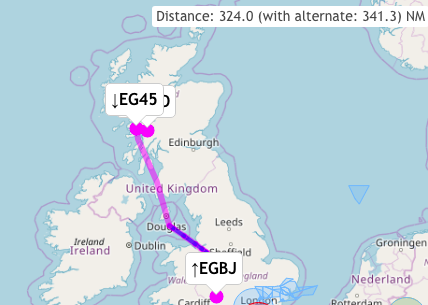 I didn’t really mind about flying in airways on this route – it’s primarily about punching through the mass of controlled airspace between Liverpool and Manchester without diverting hugely offtrack or diving down through the low level route. After departure, Western Radar provide the initial traffic service as you climb above FL70 and negotiate your entry into the airways system. I was flying initially ontrack STAFA and keeping just west of the Birmingham zone when we were given a clearance via MONTY, then WAL. Once into the system, Scottish Control asked me for my planned routing and final destination. Within a few minutes, they gave me a direct to my destination after WAL. Although this is primarily outside controlled airspace, it suited my needs.

After we crossed into Scotland, I requested the weather for Oban. It sounded very promising, wind 210 @ 12kts, – visibility greater than 10km, showers in vicinity, few clouds at 1600 feet, scattered 2200 feet, overcast at 3600. We continued along in the bright sunshine, well above the clouds. An airways crossing clearance for P600 was given well in advance without prompting. I continued directly on towards BRUCE, a waypoint directly at the entrance of the sound leading northwest towards Oban.

Commencing my descent, I signed off with Scottish who reported “nothing to affect” and spoke with Oban Information. They gave me an unofficial weather report that was much less favourable – 2000m visibility and low cloud. Quite a contrast and a surprise compared to just an hour previously. I still thought it worthwhile attempting a cloudbreak, on the basis that if we didn’t see the sea by 1000 feet then climb back up and divert elsewhere.

Flying on autopilot, we flew an OBS groundtrack north east from BRUCE using the onboard GPS and made a controlled descent into the clouds. You know there are hills around you and are relying on the certified GPS to position you above the water. SkyDemon on the iPad provides further reassurance. My wife looked directly down and called out when she could see the water, and a few seconds later I could see ahead. I lowered some flap and slowed down to proceed cautiously towards Glenforsa, signing off with Oban and making blind calls initially – later getting a response from the ground.

As we got closer, we suffered some clear air turbulence but before long were positioned for a long final with the runway clear ahead of us. It was a fairly straightforward approach – for once all the windsocks were pointing in the same direction down the runway – with just a tree to avoid to the left on short final. The ground felt a bit soft, and we had been asked to avoid hard braking to avoid churning up the surface but we slowed in about half the runway available. Brendan was already there, ready to marshall us into position, help pushback and even carry our bags into the hotel.

The white line in the photos below isn’t a lightning strike but just an overlay of our position in the overall journey track.

The hotel itself has been much improved over the 15 years that the current owners have lived there, with the latest addition being a large new bar area with outside decking – must be ideal in the sunny summer weather. A large lounge upstairs also shares the same glorious views across the Sound of Mull to the mainland. We sat there watching Brendan as he flew a few circuits in his bright yellow Stearman – apparently the first time he’d flown it for many weeks. You can see many pictures and videos of it on the airfield website.

Frankly there’s not much in the immediate vicinity of the hotel, but we did venture out for a walk along the shoreline, met a few Highland Cows and some of the locals. The bar is open all day (for both food and drink), with a restaurant from 6:30pm. The range of whisky behind the bar is comprehensive, including of course one from the nearby Tobermory distillery. 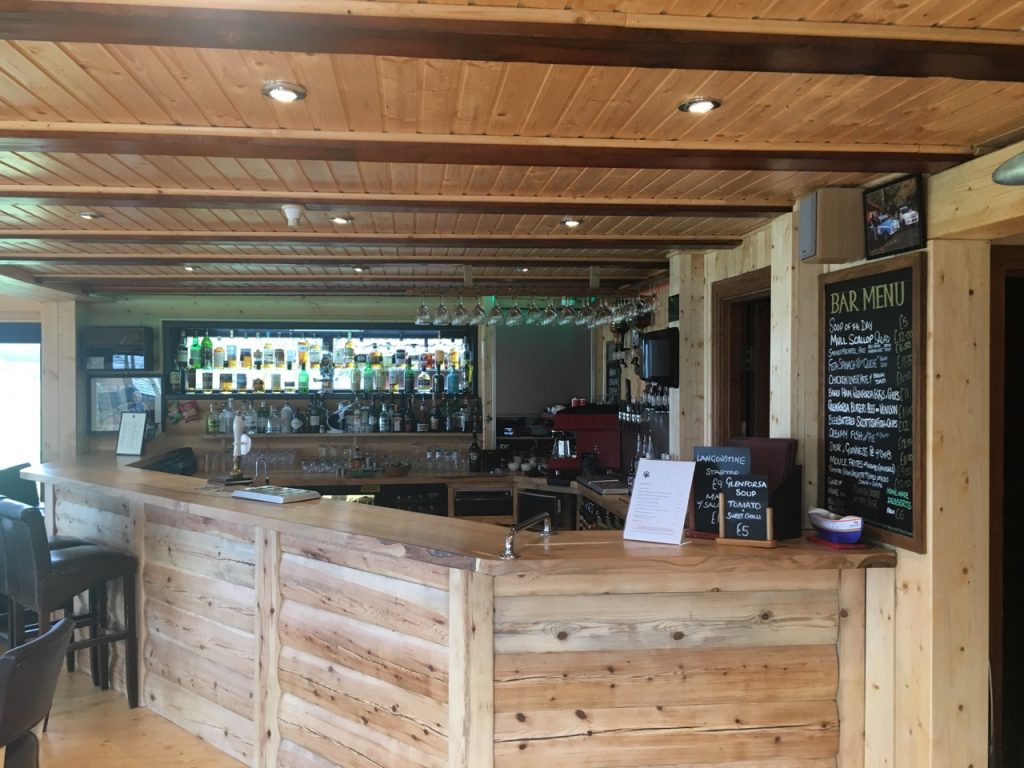 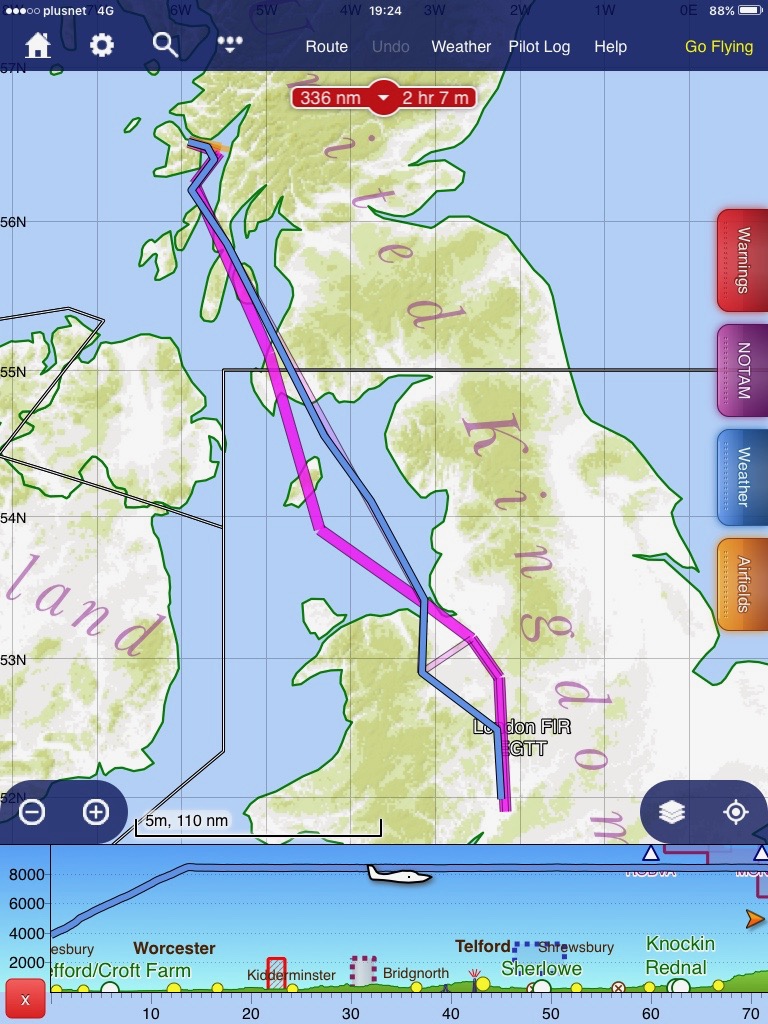 I even bought a souvenir mug to remember my visit by. 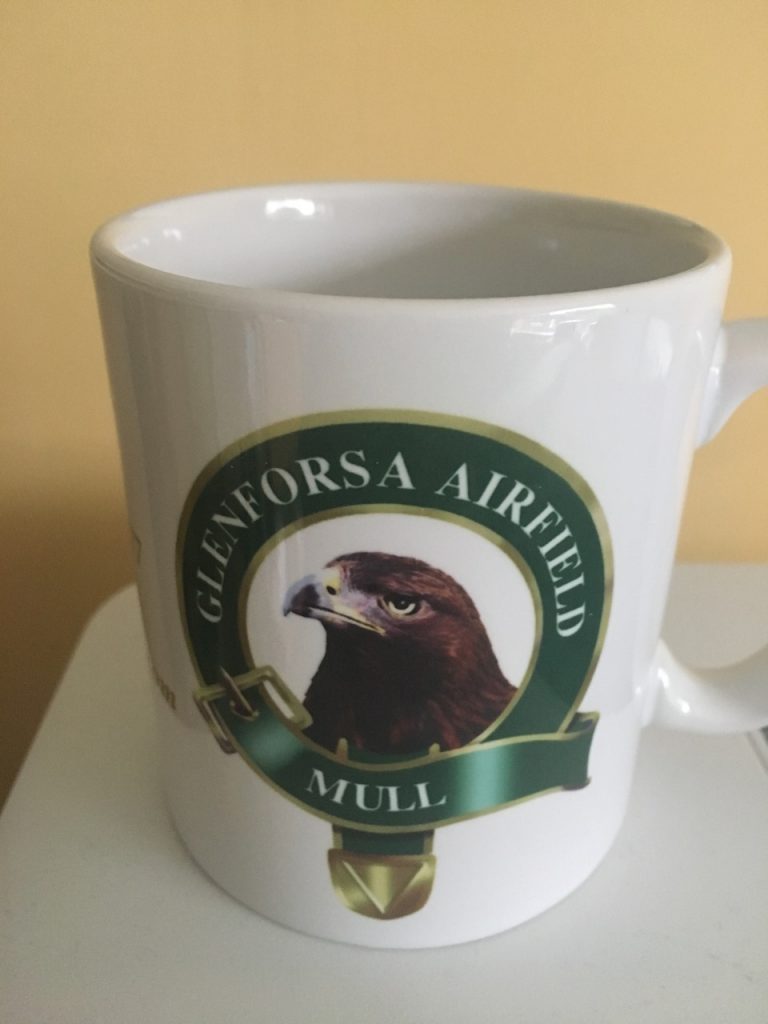 We stayed overnight, enjoyed a Full Scottish breakfast in the morning, and headed over to Oban for fuel the next day. Oban opens at 10am so it wasn’t a particularly early start. The flight was about 10 minutes if that. As before, although you want to be fairly light if the grass strip is damp, don’t limit your fuel supplies so you can make it elsewhere should you need to.

PPR is mandatory for Oban but easy to arrange. They do close promptly in the late afternoon. Fuel is supplied by a separate company (Total Logistic Concepts) run by Paul Keegan, so you end up paying your landing fee in the airport office then walking along to the fuel office to pay for fuel.