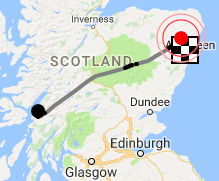 The main purpose of our Scottish weekend trip was to visit relatives in Aberdeen and I’d asked ahead about the cost of landing and handling there. I’d been put off in the past because quoted fees have totalled several hundred pounds and instead I’ve landed at Dundee. Nowadays Aberdeen airport (and the local economy) are much less busy and the handling fees can be negotiated down to a more reasonable amount. I figured that if I didn’t hire a car (as would be needed from Dundee) it would work out at a similar overall price.

I thought having “booked in” with Signature for handling would have been enough so didn’t file a flight plan. It was after all only about an hour’s flight time direct from Oban, outside controlled airspace. The same trip by car would take over 4 hours and by train nearer 8 hours.

On departure from runway 19 with a large hill ahead, I gently turned south west and climbed out over the sea to around 2,000 feet before turning south east and continuing to climb through the clouds. There are some relatively high mountains in this area, including plenty of “Munros” (pronounced Mun-Rows) over 3,000 feet high, so you want to ensure you will be well clear before turning. There was quite a strong tailwind and we cruised along at 5,000 feet, just above the cloud tops.

Scottish gave me a traffic service but it was so quiet that they didn’t have to report anyone to me that I can recall.

I recorded my fastest groundspeed to date – it briefly touched 210 knots but I did get a record of 202 below (and 207 via FlightRadar). Lulled into a false sense of security by the calm and settled cruise, I didn’t deliberately try to avoid the odd cloud top we flew through – bad mistake as we were bounced hard off the ceiling as we passed through an innocuous-looking one. The padding in the headsets proved remarkably useful. I climbed up to 7,000 feet to ensure we didn’t do that again. In retrospect I should have made that Flight Level 70, since it was above the 6,000ft transition altitude in that area.

Scottish transferred me over to Aberdeen approach about 25 miles out, who had few details about my flight. They seemed to think I was heading for Dundee for some reason. Apparently it would have helped if I’d filed a VFR flight plan, but they did accept me and my request for a vectored ILS to the southerly runway 16. I asked to remain above the clouds a little longer to avoid unnecessary turbulence, probably too long, so that the descent started a little late and with something like 13 track miles to run while still at 4,500 feet, I was asked if this was sufficient. ATC were on the ball.

To be positioned for the ILS glide slope intercept at about 2,500 in 6 miles would mean a descent rate of 1,000 fpm – possible but a bit uncomfortable and leaving little margin for error. Fortunately, when I asked for more time was told no problem – expect to be vectored through the localiser and to intercept from the other side. You can see on the video that I was descending at a high rate with the gear up alarm sounding for a couple of minutes.

This I did and was established in good time before the final approach fix when I was slightly surprised to receive an instruction to descend to 2000 feet (i.e. below the 2500 ft intercept on the plate). This was probably the controller ensuring separation from other traffic but possibly thoughtfully giving me more time to ensure I was fully established. I confess to a slight concern about buttonology here – would the KAP140 autopilot (now armed in Approach mode) still intercept the glideslope at this new altitude. I turned off alititude hold, pressed the descend button and reselected ALT HOLD when at 2,000 feet.

At this point, a pilot will be actively monitoring everything, having re-checked the altimeter setting, power settings and just before the glide slope intercept be ready to drop the gear and flaps. The strong westerly crosswind (confirmed by a wind check to be 15 knots on the ground, so likely 30 knots at 2000 feet) caused some turbulence but the autopilot managed to hold it. 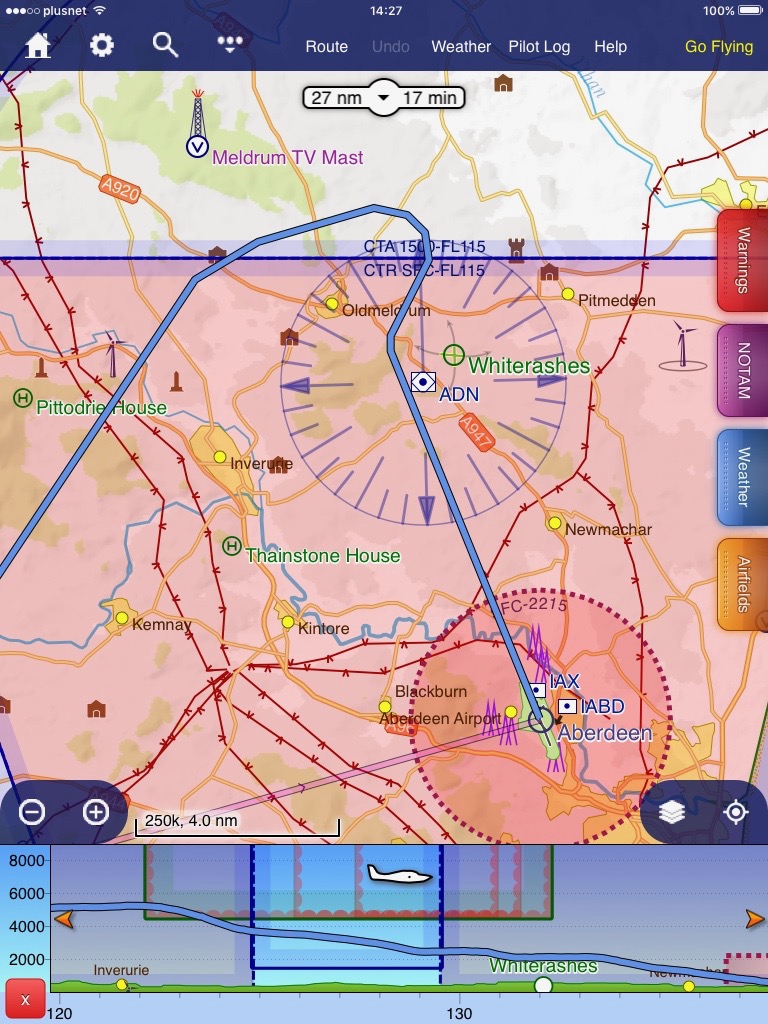 When established and 7 or 8 miles out, the controller asked me to confirm my speed and handed me across to tower. After an early landing clearance, I managed what I thought was a pretty reasonable crosswind landing in these gusty conditions and didn’t try too hard to land early or slow down quickly – I was expecting to taxi to the very end and turn off into the Signature parking area. Not so – a follow-me vehicle was waiting at Echo and quickly showed me my spot, then disappeared immediately I shut down. Signature appeared in a minibus shortly afterwards, driving us the short way to their lounge and helping with the bags etc.

Compressed 8 minute video with ATC radio calls below. If you want to see more of these, please do subscribe to my YouTube channel.

Next day, we spent a little time at the beach on what was quite a sunny Sunday afternoon, with locals enjoying the sunshine despite the breeze. The local economy has suffered a lot from the recent downturn in oil prices with fewer activities and jobs in the oil industry. Nobody seems to have told the construction industry who seem to be building many more new houses. Meanwhile the largest infrastructure project in Scotland will start in June (the Western Peripheral Route – a sort of mini-M25 around Aberdeen) but traffic during rush hour is already visibly reduced.

For the record, I limited myself to just one Buttery (a local lard-based pastry) for weight and balance purposes.