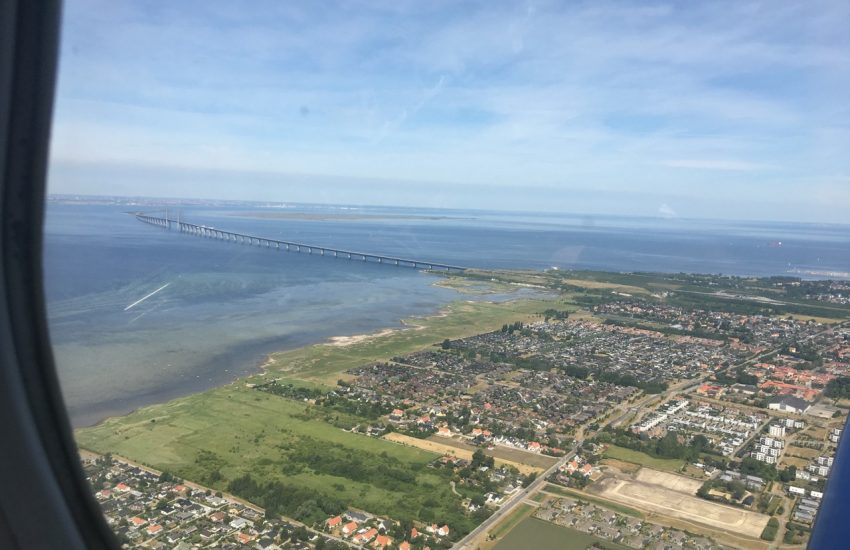 The weather had been good to us but was starting to look a little more unsettled, and we were aware that we had two long days of flying to get back home to Gloucester from Malmo in our club PA28.

Today’s legs would be Malmo – Flensburg – Bremen – Rotterdam.
VFR Flight plans required for first and last legs only because they crossed international boundaries.

We reckoned that this would balance out the overall flight times for each of us, working out just over 6 hours chargeable flight time each. Not bad considering how far we went.

We boarded the first feasible coach back to the airport at 9:30 (the 7:05 would have been a bit enthusiastic), paid our landing fee at the information desk, and were shown through a special security entrance. A security officer did the usual security check of our belongings, including walking through a scanner. I doubt if I would have been allowed a knife or water bottle, so just as well we didn’t have any. We waited outside for a while, and were then driven back to our aircraft and left to pre-flight while staff sat in their crew car.

John flew first to help balance up the flight times between us. He requested a westerly VFR departure from Malmo so we could fly close to the bridge between Sweden and Denmark. In fact the crossing is part bridge and part tunnel, with the roadway/railway descending into a tunnel about half way across in what I believe is a man-made island. The structure is quite impressive and means you can drive directly from Southern Europe all the way up to the North Cape. Frequent trains run between the centres of Copenhagen and Malmo.

As we came close to the Danish half of the seaway, we turned south to keep well clear of controlled airspace, and spoke to Danish ATC. This first flight was fairly uneventful, with a mix of Danish islands and sea crossings. There were a few airports to spot, but otherwise the ground is pretty flat in this part of the world.

Flensburg wasn’t busy and we joined downwind to land on the Easterly runway. This ferry port is tucked into the bottom left hand corner of the Baltic, giving access into this region from Germany. The airfield was pretty quiet, the staff were friendly but we made this a quick crew change and pressed on.

Russ flew this next leg into Bremen, quite a large regional airport. It was quite surreal to be able to view both the North Sea and the Baltic coast at the same time. The Kiel Canal runs through here too, as well as the main waterway south towards Hamburg.

On the ground, we were quickly refuelled at our parking area, then ferried to the GA terminal so we could make a quick toilet stop. We paid the landing fees and fuel at the aircraft, so wouldn’t have needed to go inside if we didn’t want to. It was sweltering on the tarmac outside, over 30C, so we didn’t want to hang around.

The tower controller was quite busy and I think working on a reduced staffing arrangement, which did cause a slight delay. I taxied behind a couple of commercial aircraft before taking off to the East, then turning back on myself south of the field to head west. There were a couple of gliding sites to keep clear of, but otherwise the tower was keen to switch me across to Bremen Information who provided a FIS service.

Climbing up to around 5,500 feet, we flew through clean air with no other traffic at this level. Crossing into the Netherlands, the visibility reduced in the haze. I was aware of the much more constrained airspace available and worked a routing that allowed me to stay reasonably high. Dutch Mil did talk to me, but I sensed there was very little service provided. The frequency was so quiet (for quite a nice day) that it seemed to me that Dutch pilots general don’t bother talking to them. I probably flew a slightly longer route and went further south than I needed to, approaching Rottterdam from the west rather than north west.

I had studied the arrival routes and details at length the night before. Rotterdam Flying Club who now handle private small GA visitors had provided a detailed guidebook, nonetheless it was helpful to have two other pilots onboard watching out and prompting me through each step. There were a couple of other aircraft departing as we arrived, and ATC were helpful to point those out. We flew north (ie to the right hand side) of the motorway which ensured separation, and tracked carefully west then south along the defined inbound arrival. Turning base for 06, the runway was clearly in sight and made for an easy landing. Having been there before, I didn’t require a follow-me vehicle. Someone from the club walked out to meet us, direct us where to park and remind us to wear hi-viz.

A shortened 6 minute video of the VFR arrival procedure with ATC below:

By coincidence, it was the club’s open day today and so quite busy throughout. Nonetheless, we managed to grab a beer from the bar while we finished off the paperwork. The club has some 600 members and several aircraft. Hourly hire rates are somewhat higher than the UK, and I noted that although an IR course is offered, a CB-IR isn’t.

We took an Uber into town where John had rebooked our hotel for a another in the Witte de Withstraat. This is probably the most lively street in the city, with bars spilling out onto the street, and a party atmosphere throughout.  Unfortunately John hadn’t read the small print, and we found ourselves in a Pod hotel, where each room has a double bed either above or below next door’s, with shared showers and toilets. A bit like a modern take on a youth hostel.

So we soaked up the atmosphere, enjoyed a few beers and pretended to be a bit younger.

Then went to bed really early.