Guess the next country?

If you fly north east from the top right hand corner of Germany, which country do you think you’d reach first? Finland, Russia, maybe Sweden? Well you’d be wrong. The fifth largest Danish island of Bornholm awaits you. It’s in the Baltic rather than much of Denmark in the North Sea, and combines a lot of tourism with a busy fishing industry. Transport is either by air (to Copenhagen, Aarborg or Billund) in Denmark, or by ferry to Denmark, Sweden, Poland or Germany with the shortest voyage of 1h20.

Our flight directly from Peenemunde would take only 40 mins airborne time.

Since this would be another trip crossing an international boundary, Russ had filed a VFR flight plan. Peenemunde is not a towered airport (just air/ground), so we were advised to open the flight plan via Bremen Information once airborne. The VFR departure involved a right hand 180 degree turnout around the circuit pattern from the southerly facing runway which gave us great views of the airport and the main museum. There’s a bird sanctuary designated up to 2000 feet, requiring a rapid climb while keeping clear of danger areas en-route.

Russ quickly changed to Bremen Information in order to activate his flight plan and clarify if the Danger Areas were active or not. Instead, we heard a recorded message telling us to use a different frequency depending on whether we were north or south of a specific latitude (I recall it was 52N but it might have been something else). It’s surprising how easily something as simple as this can cause mild consternation. Without being able to open our flight plan, we shouldn’t really be crossing the FIR boundary. There are of course many ways to figure out your latitude quickly (including looking at the edge of the chart), but a simple poke on the tablet popped up that we were north of 54 degrees, so the frequency was quickly selected.

Bremen quickly confirmed that our flight plan would be opened and that the Danger Areas were inactive. That took the pressure off, and it was a fairly straightforward sea crossing with the island coming in to view from afar. Russ had chosen to route us west of Polish airspace, so it was a direct handover from Bremen to Bornholm. Although we had a flight plan filed, we did seem to have to provide the full details over the radio.

We crossed into Danish airspace in Class E, above the TMA and were cleared to expect a right base join which materialised in good time. There were a few other light aircraft and one other commercial flight on frequency, but otherwise not very busy.

After landing, we backtracked and taxied to the GA parking area. Still being within Schengen, there were no passport/immigration formalities. The airport has a dedicated room (lounge) for GA, with a computer terminal for briefing and a phone. You call the tower, they print out your invoice on the printer remotely, and you pay via the credit card machine next to it. All very efficient. We met another GA pilot who had visited from Germany for a few days.

We’d missed the bus, so took a taxi into Ronne town centre to have a look around. It’s a fairly attractive tourist city given that it is also a major ferry port. We found a pleasant cafe by the yacht marina for lunch and soaked up the sun. 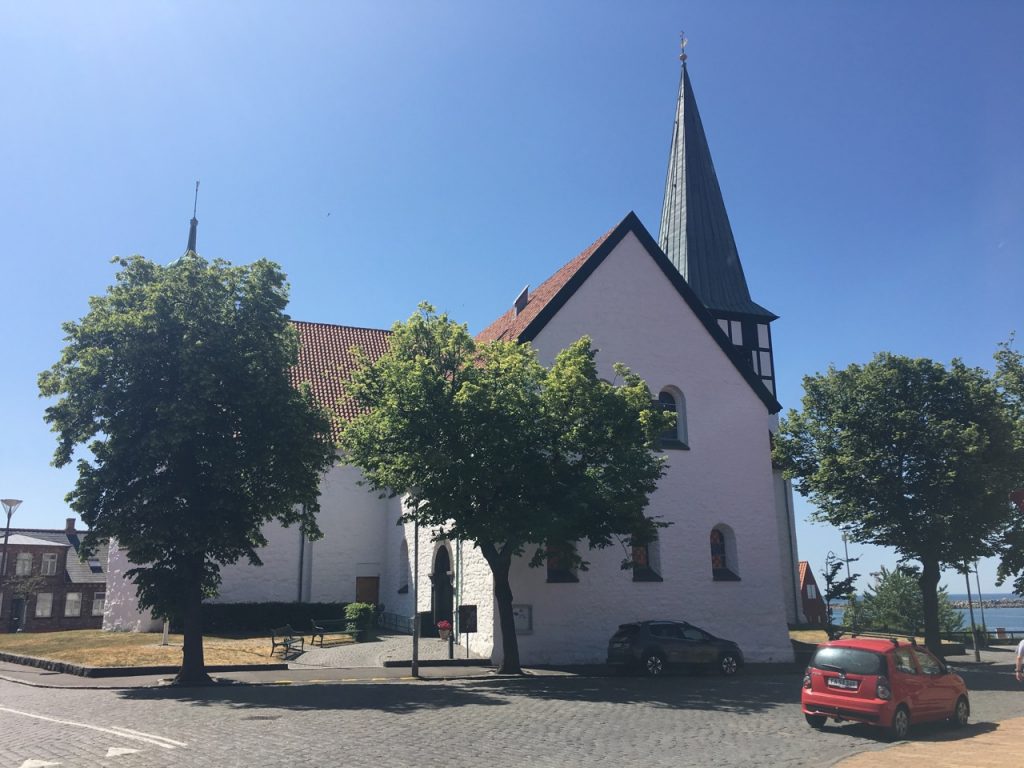 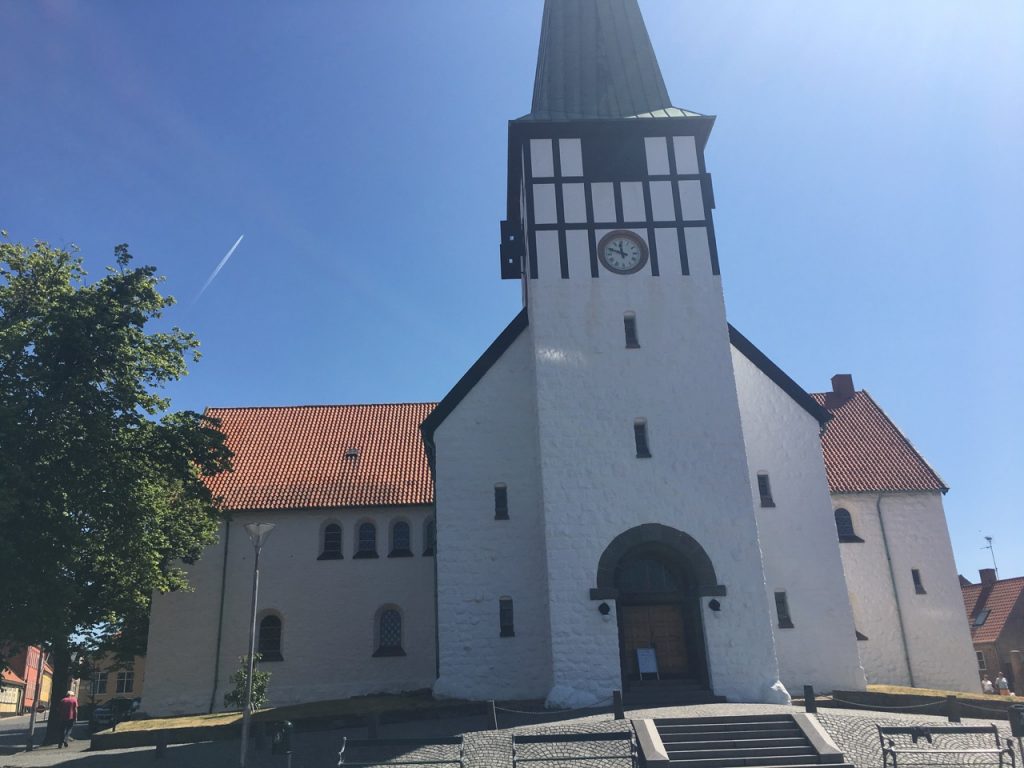 On our return, with another VFR flight plan filed, we just had to get back out through the GA security gate to our aircraft. Normally this is done remotely from the tower, where you present you pilot licence via video camera and they buzz you in. Maybe they were busy, but with no response for some minutes, we were helped out by airport staff who opened it for us.

I flew the next leg, departing initially north west to cross the coast before turning north towards Sweden. It was a remarkably short flight and we were soon in Swedish Airspace, talking to Sweden Control on what seemed like a pretty quiet frequency. It being a weekday, Kristianstad Tower was manned (it’s not at weekends) and we made a straightforward downwind join to land on the long runway.

I had been in contact with the aeroclub, who kindly hosted us, and that meant no landing fee. It was a fairly brief stop, and the furthest on our tour. Two members explained that the club is similar size to ours, about 100 members sharing 2 1/2 aircraft, mostly VFR. They have the airport to themselves at weekends when there are no commercial operations. I hope we can reciprocate their hospitality in the future. 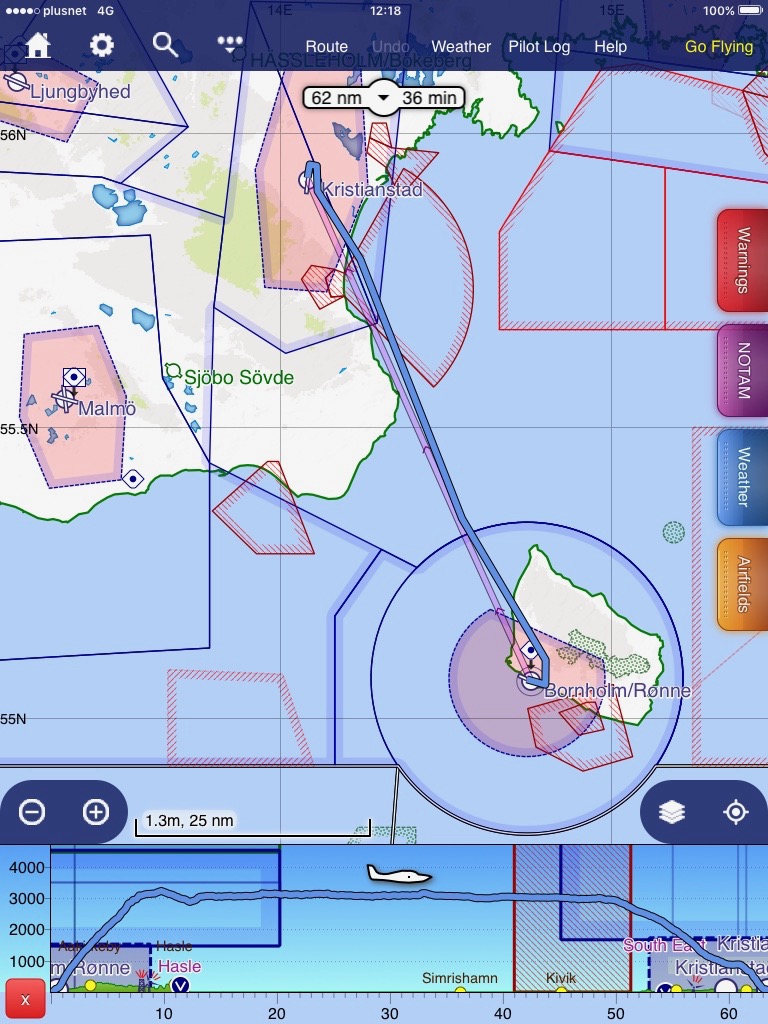 A short hop to finish the day, this time into quite a large regional airport. I spoke to the tower controller at Kristianstad to clarify whether any PPR or flight plan would be required – none at all.

So “booking out on the radio”, we were cleared to depart and handed over briefly to Sweden Control, then quickly on to Malmo approach. They cleared us into their zone at quite a low level, with the heat making for some turbulence. It became a straightforward left base join for a long final. After landing, a follow me car was ready waiting for us and directed us to the GA parking stands. A 737 delayed their pushback by 10-20 seconds while we passed behind.

We admired a couple of YAKs parked nearby, and watched one or two smaller GA movements. The parking area is quite large so could accommodate a fair number of planes.

We had requested fuel on arrival on first contact, and sure enough the fuel truck appeared almost at the same time – very efficient. We were driven in a crew vehicle the short way to the terminal and dropped off at an unmarked door which opened out into the main terminal itself. 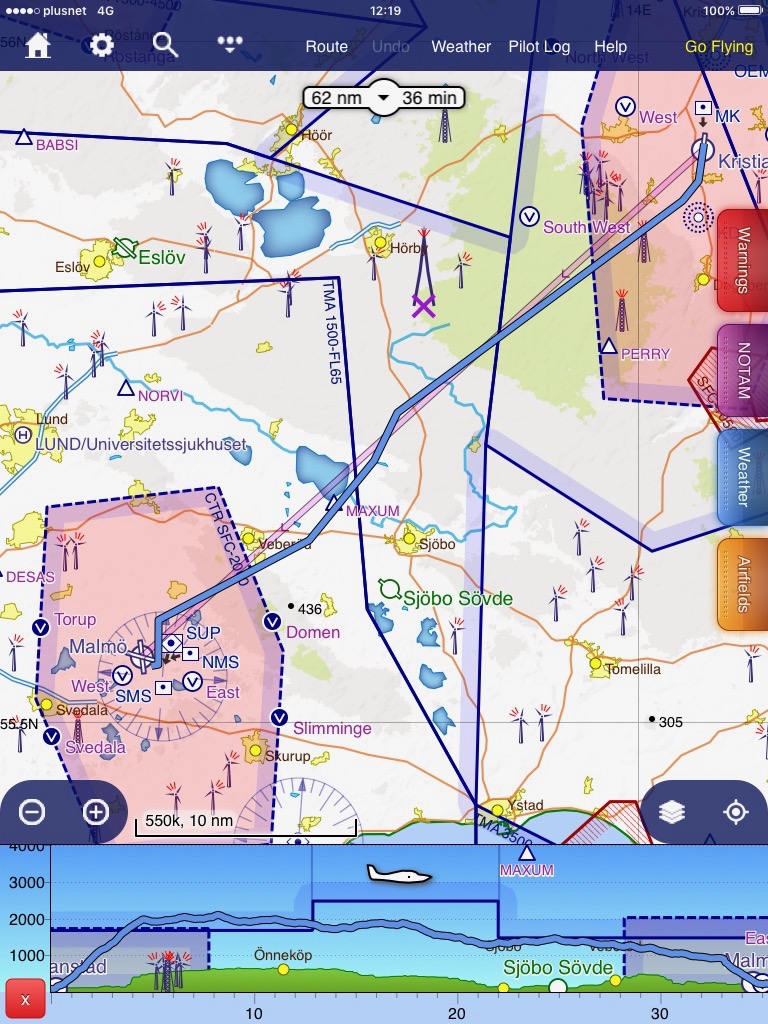 We took the bus directly into the centre of town – a fairly long trip of 40-50 minutes – slightly delayed by some party celebrations going on. We later found out this was the local senior school students celebrating graduation in everything from trucks with decorative floats to individual cars.

Although I had reserved a hotel some time ago with the option to cancel at short notice, this was quite basic and wasn’t that close in to the centre of town. John managed to find a late deal on a much more convenient (and more upmarket) hotel, so we switched to that. A quick exploration of downtown Malmo found plenty of bars and excitement boosted by the good weather.

We’d packed a lot in today – Germany, Denmark for lunch and two Swedish airports – but relatively little airborne time. The next couple of days would be harder with longer trips to get us back home in time.