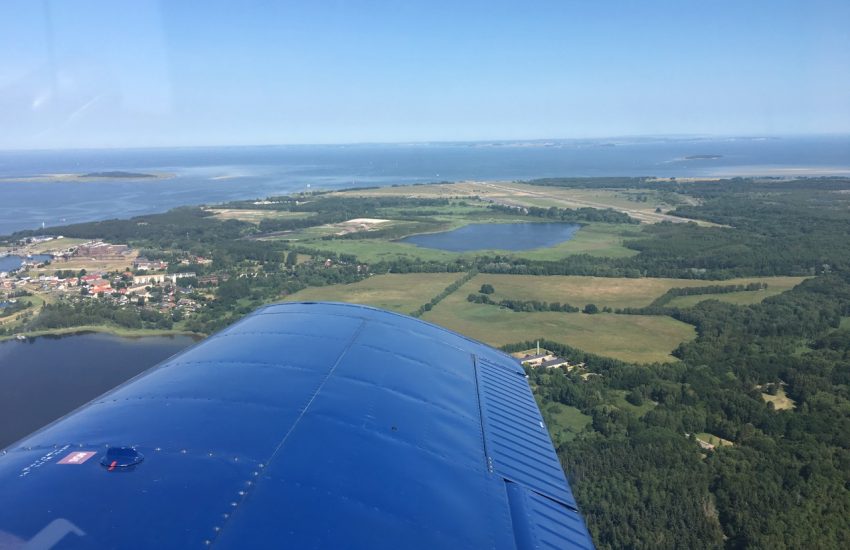 Day 2 of our 5 day trip with Russ and John in the club PA28 also involved three legs, and we flew in the same order as the previous day. There was less time pressure, so after a fairly leisurely start we stopped for a quick coffee in the airport terrace. It took a few minutes to gain access to the GA office – I think they must have been busy elsewhere – but the formalities of paying landing fees were quickly completed. Our flight plan had already been filed via SkyDemon so we were ready to go after pre-flighting and refuelling.

Our three legs today would take us from Groningen in the Netherlands, via Wilhelmshaven and Lubeck to Peenemunde is the furthest top right hand corner of mainland Germany, almost on the border with Poland. My flight would be the third leg, marked in blue. Notice how the green Class E vertical airspace depiction at the bottom is aligned with the surface rather than fixed at an arbitrary altitude. 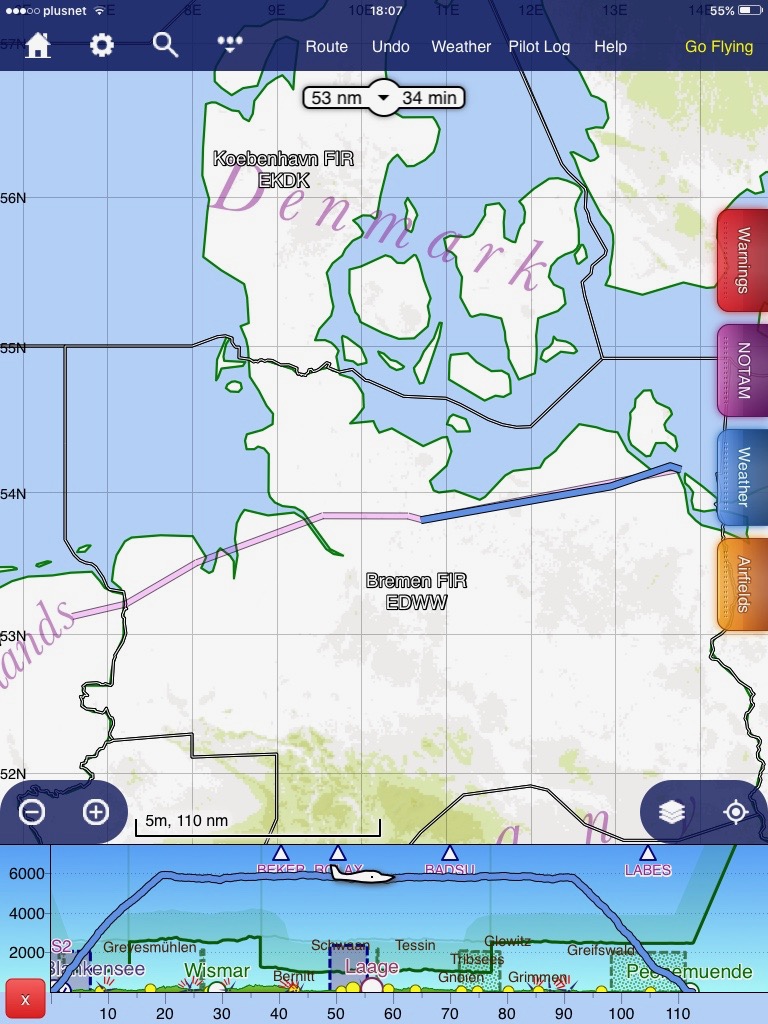 AVGAS is comparatively more expensive in the Netherlands than elsewhere due to higher taxes, so we limited ourselves to enough to get to our first stop in Germany. A ferry pilot was refuelling a Cirrus while we waited, and seemed to be taking a long time. I discovered his credit card limited him to about 50 litres at a time, so he had to repeat the (tedious) payment process several times to top off.

Departure was straightforward and we quickly switched across to the German FIS at the border. I find the service in Germany is generally very good with easily understood English. The flight was relatively uneventful with just one excitement of traffic called out at our 12 o’clock similar level – with eyes on stalks we saw him pass to our right and slightly below.

The call to Wilhelmshaven tower resulted in a crosswind join and normal circuit pattern to land. We quickly refuelled – this time paying in full for both in the tower. Our next leg would be within Germany and so the first flight on this trip without a mandatory flight plan.

John’s turn to take us to Lubeck, another relatively short hop. He flew us at three thousand feet which made for a comfortable flight. Our route took us just to the north of the Hamburg CTR and although we could have requested a zone transit, FIS suggested this might be unlikely so kept north and remained on the same frequency.

We later discovered that Lubeck was expecting a gaggle of aircraft inbound from the UK at about the same time, so they were a little surprised to hear us announce inbound but without a flight plan. Once everyone realised we were not part of that group, we were cleared for a left base join. Some turbulence and variable wind made the approach a little more challenging, but John made it look straightforward.

We taxied straight to the pumps and it took us a little while to locate the refueller, who was then very attentive, supervised our refuelling and ferried us to and from the terminal building to pay our fees. We knew there was no fuel at Peenemunde so wanted to take every opportunity to refuel where we could.

The reception area in Lubeck was welcoming and the facilities good. 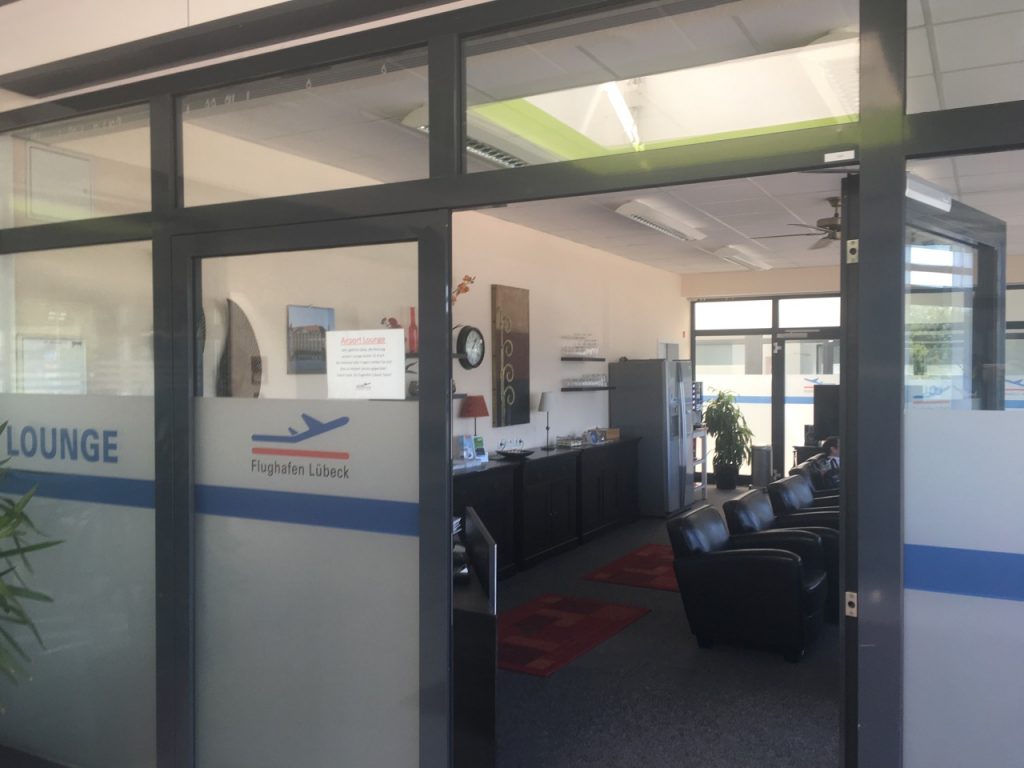 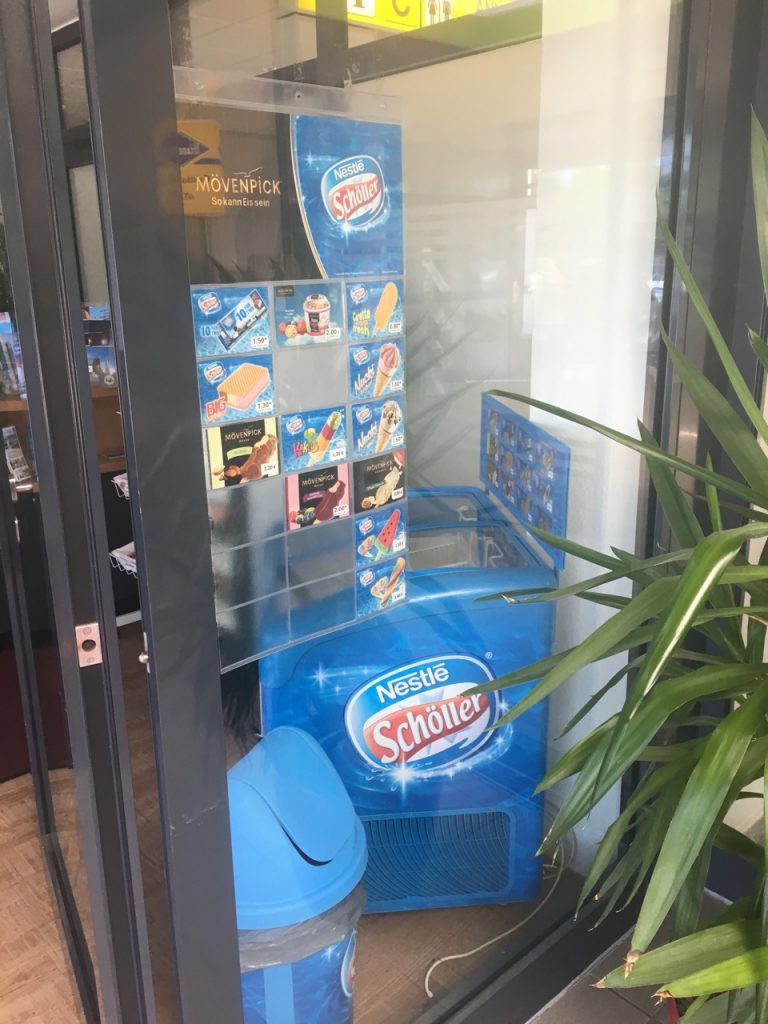 Once again, no flight plan required for our next leg which was my turn.

I planned to climb up to 5,500 feet to keep well clear of any airspace as well as keep cool and avoid the turbulence. It was a hot day, about 30C on the ground. FIS on the radio was again straightforward to use and helpfully noted that I should fly at FL55 rather than 5,500. I checked later that the transition altitude throughout all of Germany is a fixed 5,000 feet. How sensible (compared to the many transitions altitudes found in the UK).

It was 20C even at FL55, so adjusting the ASI to show our calibrated airspeed confirmed we weren’t going too slowly. The IAS of 87 knots translated to a CAS of 112.

The topology around here is very flat, with some more interesting areas to look at around the coast. As we approached Peenemunde, we could pick out the shape of the coastline and the peninsula it lies on. Our first call to the local A/G went unanswered, but we did make contact closer in. I had planned a gentle cruise descent from about 20 miles out (allowing 4 miles per 1,000 feet at 500fpm/120 knots), which worked out well. 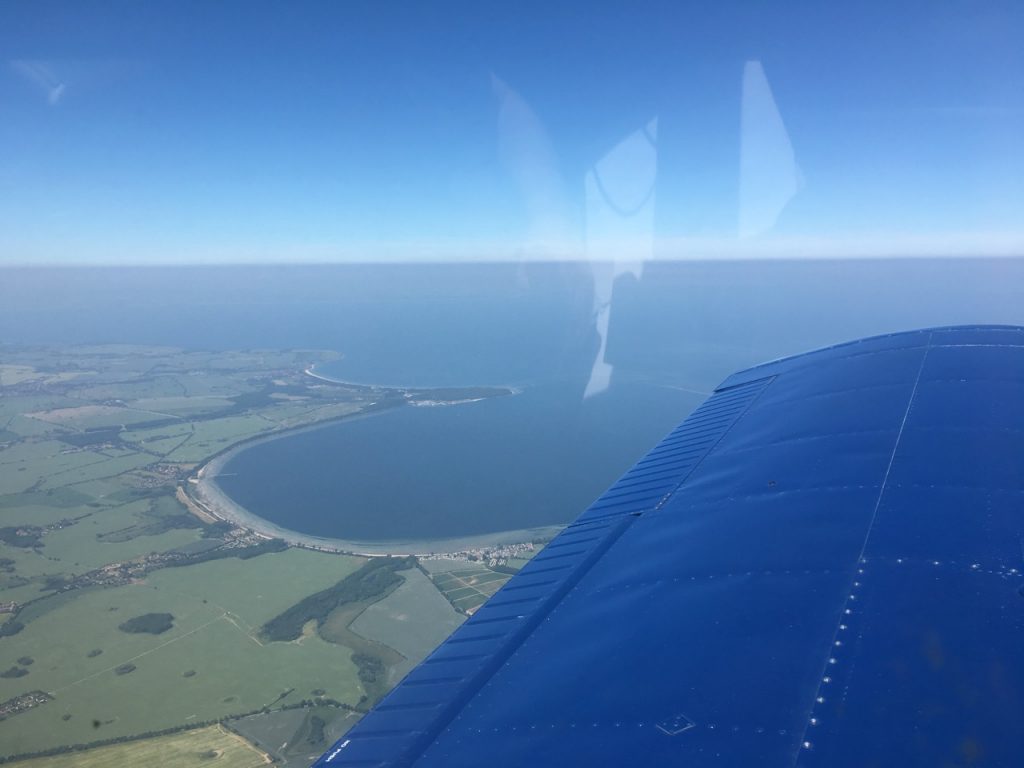 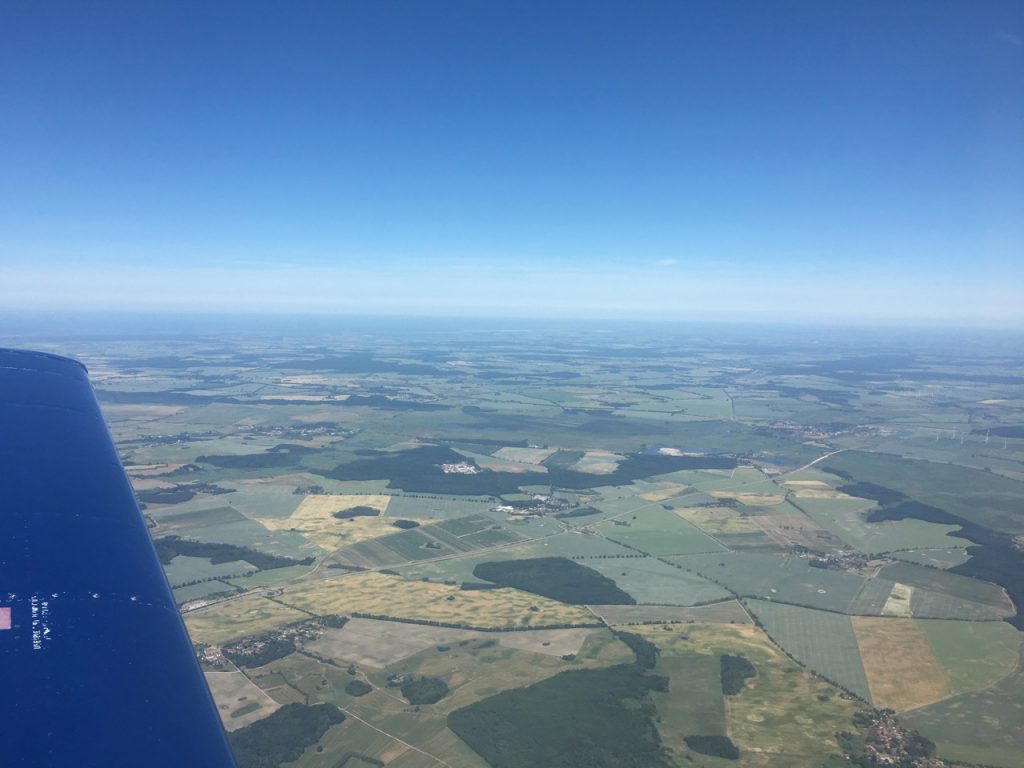 With no other traffic around, I self-announced a right base join and was asked to land long to avoid a lengthy taxi to the far end. It is indeed an impressive and long runway in a relatively remote area. The parking areas looked a bit run down but seemed fairly clear of stones or other debris.

6 minutes summary video of the flight with subtitled ATC below

Arriving just before 2pm, we had hoped to view the main museum and any other sightseeing that day then depart promptly in the morning. We hadn’t realised there are no taxis in this area. The wife of the airport manager runs a separate business renting out equipment and acting as a tour guide. Bicycles can be hired but weren’t really suitable for luggage, and there weren’t enough of them, Fortunately a small hire car was available for the day and we took that. I’d advise anyone else coming here to book ahead and agree terms in advance. Another option would have been to ask our hotel to send a car to pick us up.

We first drove directly to the main Peenemunde  Technical Museum a few miles away and spent a good few hours looking round. There’s quite a lot to see and read. The site was the main R&D centre for V1 and V2 “cruise missiles” during WW2 and features a large power station to service the entire complex of 12,000 people. Replicas of the machines, stories from the staff and prisoners, even an old train carriage are all there to see. 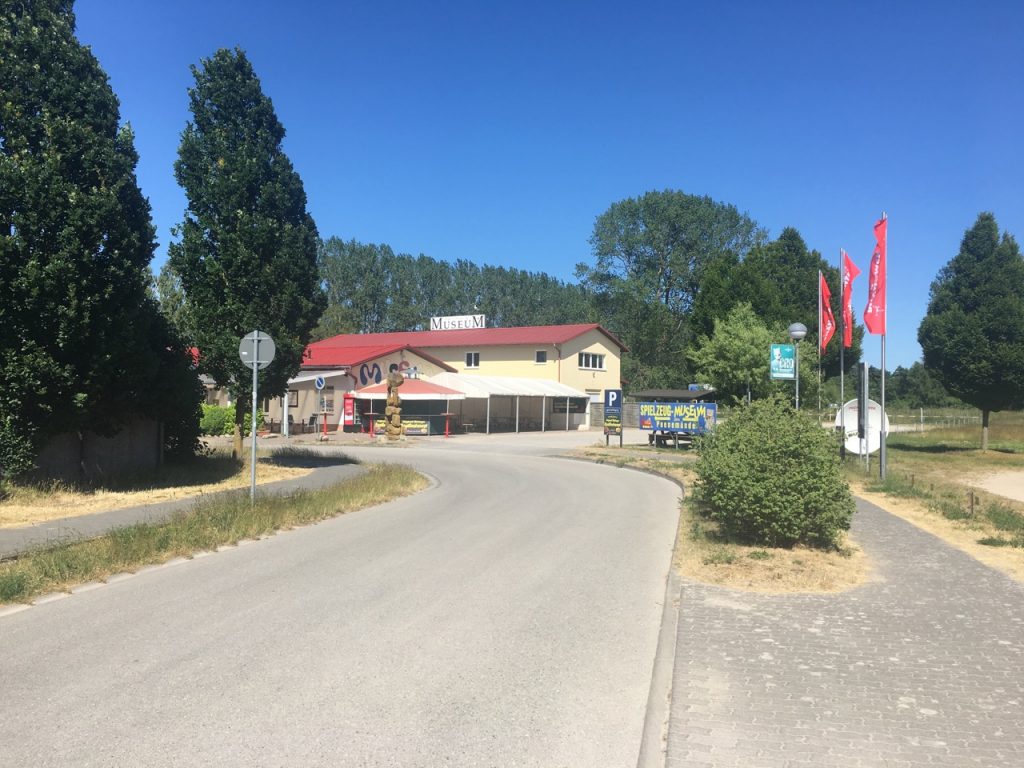 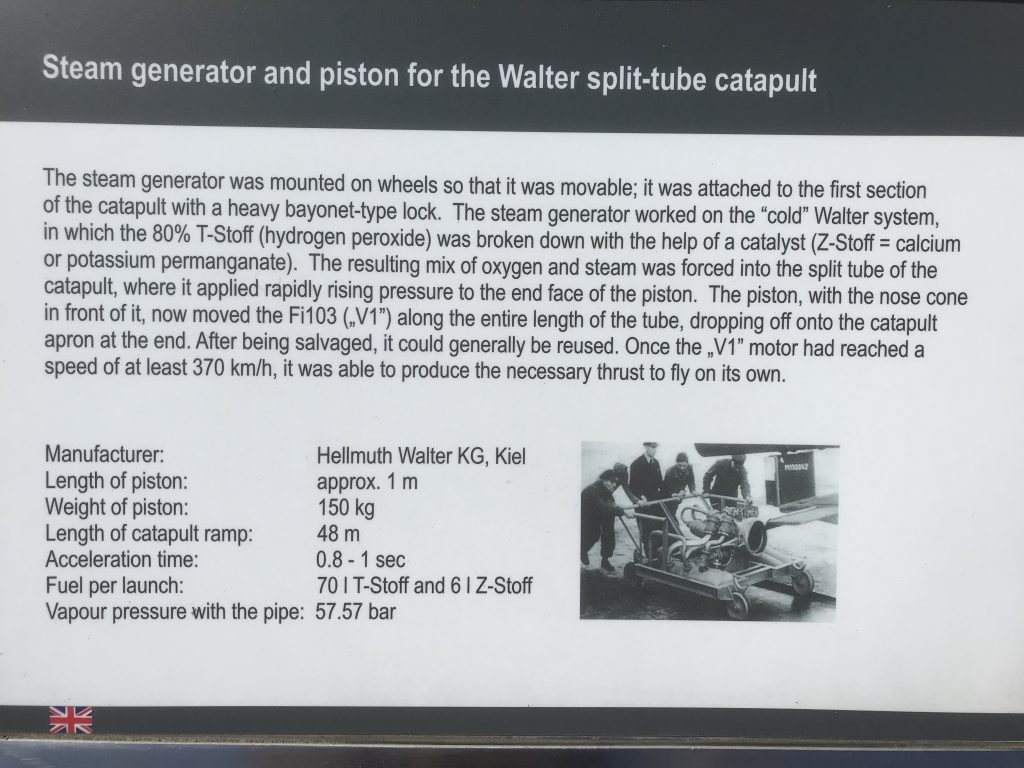 Many of the scientists who worked here originally had better objectives for their research than the war effort. After the war ended, quite a few moved on to develop rockets for other purposes, including the space programs and satellite launchers for other major countries.

Peenemunde is also a major tourist resort with some of the nicest sandy beaches in Germany. it can get a bit windy, so they’ve provided comfortable seats with windbreaks on the beach. A local tax of a few Euros applies to all visitors, and we had to carry a receipt from our hotel to show that we’d paid it.

After a gentle stroll to the beach where John insisted on paddling in the Baltic, we stopped for a beer (or two). The food looked good and the waiter was encouraging, so we stayed for dinner watching life go by on a pleasant summer’s evening.