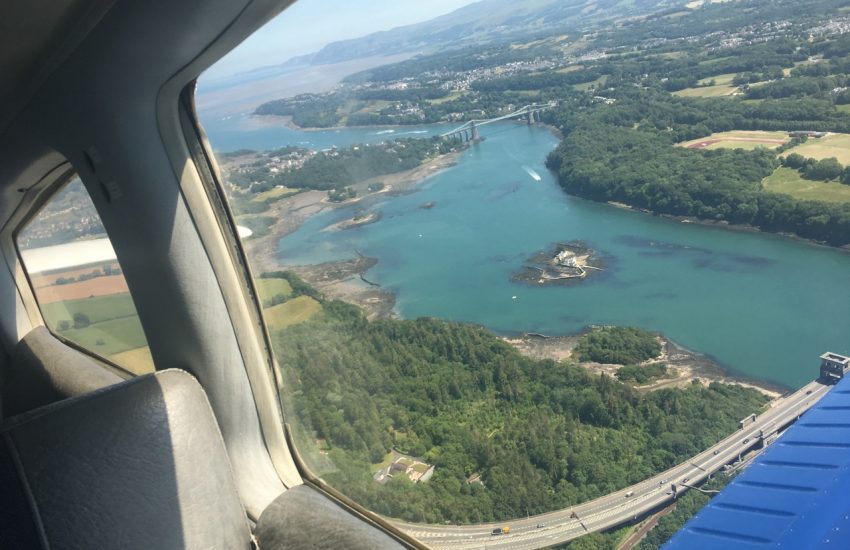 The Bristol Aero Club monthly flyout in June flew to Mona (EGOQ) in Anglesey, North Wales. I had advertised my availability to come along in my role as instructor and two students were quite keen to fly a leg each. We made clear it wouldn’t count as part of their formal syllabus, but the hours did count towards the 45 minimum for their PPL course. It should also be good experience for both of them.

The 4-leg route was finalised as Gloucester (EGBJ)-Sleap(EGCV)-Mona(EGOQ)-Welshpool(EGCW)-Gloucester(EGBJ). The leg from Sleap to Mona would route north west, towards Liverpool so that we’d fly southbound down the Menai straights. There would be three aircraft flying the route – 2 warriors and a Cessna 172.

The weather looked glorious – if anything just a little on the warm side – with wall-to-wall sunshine and virtually no cloud.

We saw some very unusual and interesting aircraft at Gloucester before departure.

Jay flew the first leg up to Sleap very well. I have flown with him before for circuit training and he recently first soloed. He managed the flight well with a good approach and landing, with me pointing out the arrival sequence for the overhead join and circuit turning points. I prompted him for the radio calls and only jumped in where necessary. He did all the flying and I tried to let him manage as much of the flight as possible himself.

James turn next. I hadn’t flown with him before, although had seen him in the club several times and had taught him the A-check on his very first lesson when the weather wasn’t suitable to fly. Again he managed the flight well, given the height and headings to fly. We routed north west to the coast and got some great views of the Wirral and Liverpool before turning south west down the coast and along the Menai straights at low level.

Some great pictures below including a short 1 minute video of the Menai Straights (8x speed).

Mona is a military base, close to RAF Valley, and during the week can be quite busy with military training. At weekends it’s exclusively available to the flying club who seem quite happy to accept visitors. There is an air/ground service although it is not guaranteed to be available all the time. The landing fee was very reasonable. Teas and coffees were available from the kitchen in the clubhouse where we were made very welcome.

The return flights back to base were flown by PPL club member Graham, so I could relax as just another passenger enjoying the day out. For some reason I didn’t take any more photos. The new (to me anyway) cafe arrangements at Welshpool are quite nice, with a great view of the runway from the verandah. Cream teas and cakes were very much on offer.

Total instructor time on this trip 2:25 (plus 0:50 of circuits with another student after return). No time logged from Mona-Gloucester, I was just enjoying the flight as a passenger.

This all contributes towards my next milestone of becoming an unrestricted flight instructor, for which I need to complete 100 hours of instruction and 25 solo signoffs. But in any case, it was a very enjoyable day out. Hopefully it has boosted the confidence of both students and will encourage them to fly on this kind of trip (and more) after they pass their PPL tests.